Fox Point Photo History has placed online a post-1938 photo of “Jacques Lunch” courtesy of Lou Costa. To Lovecraft this was “Jake’s”. The date looks to be the early-mid 1950s, though I’m no expert on American cars and it might be later. 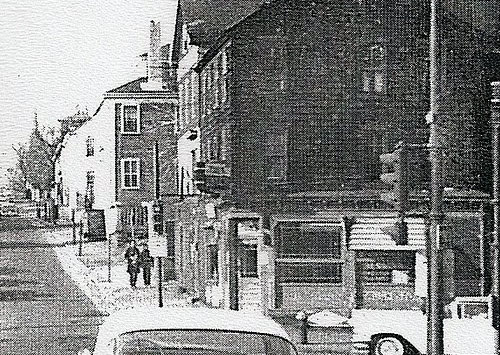 The photo has the “1” in 132 Wickenden Street cut off by the scanner. It had formerly been at No. 126, and moved to No. 132 in 1938. So this is the later site that Lovecraft would not have known, but it indicates the situation. Since Ken Faig Jr.’s Moshassuck Monograph Series No. 18 (2019) has scrutinised the maps and puts the move from 126 to 132 as only “one door east”. In which case, as the picture looks north, the old location known to Lovecraft was very near if not adjacent to the above cafe. I wonder if it had perhaps been where the Shell garage forecourt is, as seen on the picture?

“Jake’s” as Lovecraft called it was a key local haunt of Lovecraft’s from 1926. There were however two branches for Lovecraft’s fave Providence eatery, a cheap “stevedore restaurant” which he had discovered in 1926 via Talman. “Stevedores” being burly dockworkers. In October 1929, in a letter to Wandrei (p. 171) he give a tantalising flavour of the place. Lovecraft records that he had recently enjoyed a visit to Jake’s with Talman. But he also recalls that the nervous Cook, visiting Lovecraft in Providence a short while later…

somehow harboured the least bit of reluctance toward lining up to the counter [at Jake’s, Canal St.] betwixt [black] stevedores and Salvation Army derelicts

This more central Canal St. Jake’s (formally “Jacques”) closed during the Great Depression, in September 1935. But a little later Lovecraft was pleased to discover that the other Wickenden Street branch of his favourite cafe was still open down on the even rougher waterfront at Fox Point…

I have discovered the slum branch of Jake’s is still open, so that if the call of old times is sufficiently strong, we can plunge down South Main St. & tank up with the familiar overdoses in a hardy waterfront section where the sparrows chirp in bass & the policemen go in carbine-bearing squads.” (November 1935, the volume of Wandrei letters, page 345). [carbine-bearing = bearing rifles].

However in July 1936 he told Talman in a letter that he had not recently visited the Wickenden Street branch on Fox Point, to confirm that the surviving waterfront branch was still open. It is of course possible he did visit Wickenden Street with Wandrei in November 1935, but his comment to Talman shows he was not sure if it had survived into the late summer of 1936. My thanks to Ken Faig Jr. for the 1936 letter data. 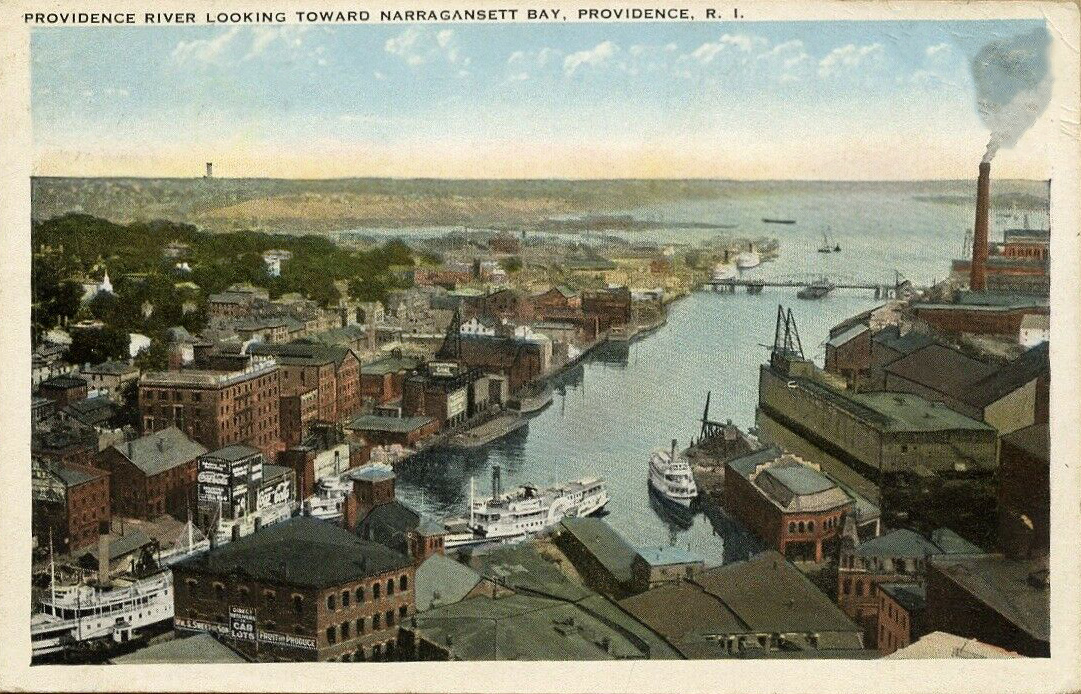 Here we see Fox Point and the docks in the distance, looking across to it from the Market Place district. The New York passenger boats arrived and departed there (see the pair of far white boats), and Morton and Loveman and possibly others used this method rather than the railway. I seem to recall that Sonia also travelled by boat. Thus Lovecraft would have walked up to the Point to meet them or see them off.

Wickenden Street was on the edge of the Fox Point ‘wedge’, and it does not seem impossible that this cafe would have been a natural destination with a friend fresh-off-the-boat and hungry for hot cheap food. The anarchist Morton being the most likely candidate to eat in a cheap “slum” cafe catering to stevedores and merchant sailors. As evidence of his venturesome-ness one can point to the time that he and Lovecraft clandestinely snuck into the adjacent rail-freight yards, then puzzled their way through a maze of sinister box-cars to reach a good shore view. 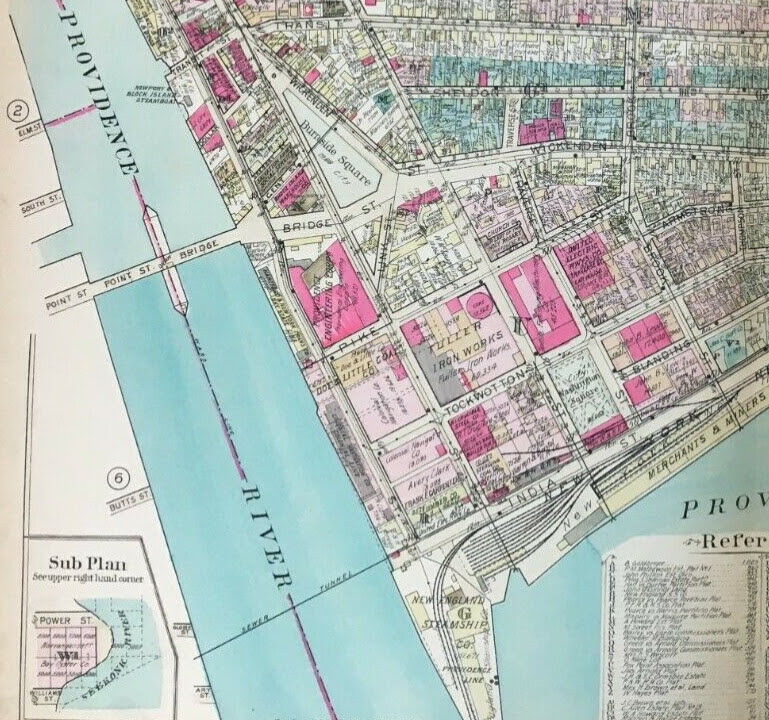 Here we look down on Fox Point, and the cafe appear to be more or less in the centre of the picture. Though I think it must be obscured by other buildings. The New York Boat docks are off camera on the right. The rail-freight yards are too low down along the shoreline to be seen. 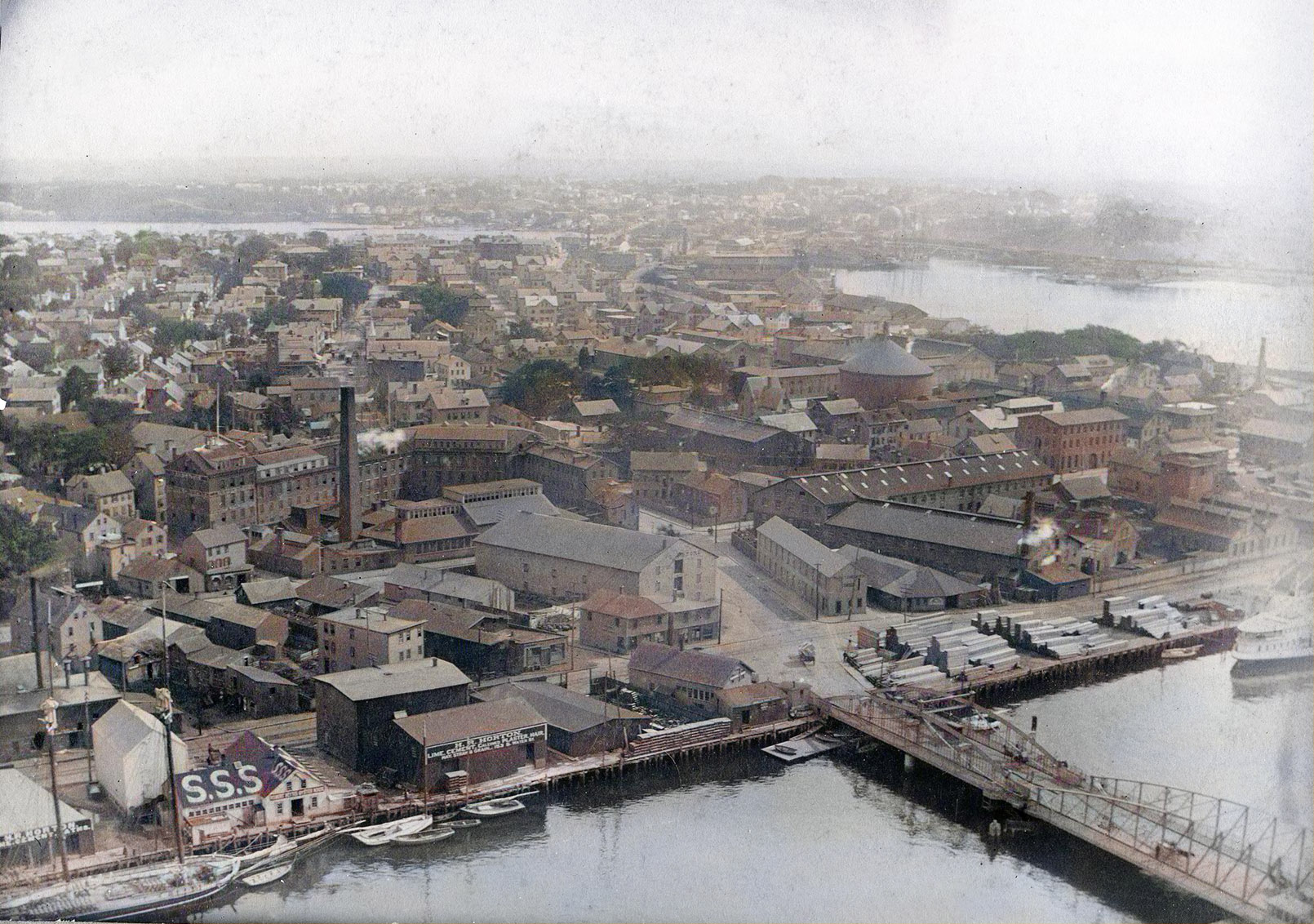 The river Seekonk can however be seen in the distance, and perhaps a line that indicates one of the Twin Islands. The young Lovecraft used to land on these with his rowing boat, when he was a sturdy lad.