Usefully available in .EPUB and .MOBI ebook formats, as well as .PDF files. The Creative Commons status presumably means that translations and digest summaries can be freely made.

Blambot will be having a 30%-off sale, starting Monday 2nd December. They specialise in digital comic-book lettering fonts, production quality but at a much lower cost than the $80-ers over at ComicCraft. Probably about a dozen are well-suited to the summoning of eldritch comics.

Those looking for digital comics production software for the desktop may also be interested to know that Poser Pro 11 is down to a bargain $164 this weekend, and that Clip Studio Paint EX (Manga Studio) is 50% off at $109.

However, at Black Friday prices, getting Poser + Comic Life 3 would be the alternative and about $70 cheaper. Thus enabling you to spend the saved $70 on two or three workhorse lettering fonts from Blambot. Comic Life is the way to go if you want panel/page layout, lettering and balloons to be as simple as possible, but still have nice slick output. Could be augmented with the free Krita, for additional over-inking work. Krita’s brushes have improved enormously with the latest 4.x version.

All the above use perpetual licences, so there’s none of that ‘subscription/rental’ malarkey.

“One Squid to Rule Them All”, Journal of Geek Studies Vol. 5 No. 1, 2018. A biology-heavy survey of the tentacular ones in Tolkien.

The Alchemist, a 1941 fanzine, new on Archive.org. It opens with a sweet Gestetner-duplicated ad from Derleth for Lovecraft… 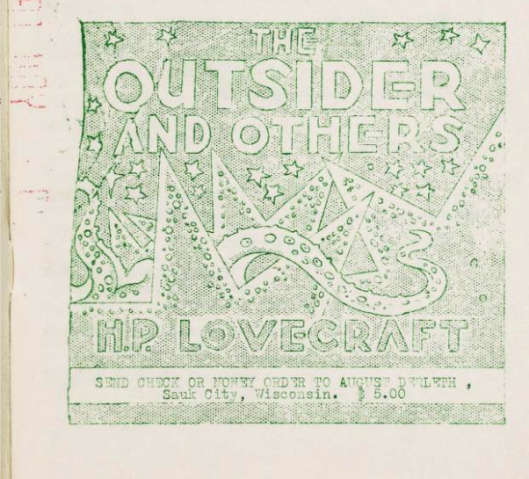 Also Forrest J. Ackerman on Weird Tales cover artist Margaret Bundage, and a humourous squit from Ray Bradbury on why he’s not Robert Bloch. On the back is a Hannes Bok design, which would probably make someone a fine tattoo these days. 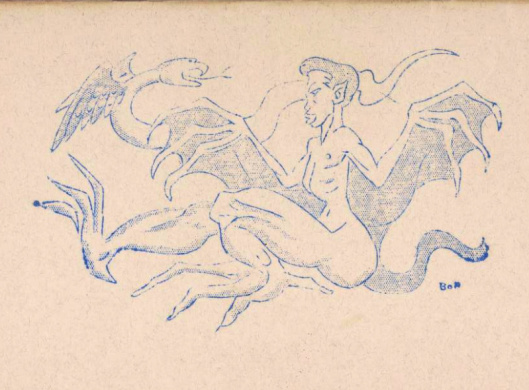 “The Pool Of The Black One”.

“The Black Stranger”, aka “Treasure of Tranicos” after de Camp’s reworking.

Another scholarly book title that’s new to me, Pulpourri…

a miscellaneous collection of well-written, impeccably researched essays on pulp fiction and how it influenced American popular culture of the late 19th and early 20th centuries.

I’m not sure if it’s going to be in series like a journal or is a one-off.

* C. de Souza and R. Giroldo, “O intruso”, de H. P. Lovecraft: o unheimlich no espelho., Abusoes, No. 10, 2019. (In Portuguese. Reads “The Outsider” figure via the unheimlich, as filtered through later critics. Also explores how Lovecraft’s atmosphere interacts with this effect. Part of a special issue on the idea of the unheimlich).

PulpFest’s annual journal The Pulpster calls for your ideas and proposals for well-researched articles. Also artwork. 2020’s event will centre around Ray Bradbury in the pulps, the Black Mask title, and the cover-art of Margaret Brundage.

You can drop editor Bill Lampkin an email at bill@pulpfest.com and the sooner he hears from you, the better. He has to plan space for articles and start collecting artwork and illustrations.

The early years of science-fiction fandom in the USA are fairly well documented by now. Or are they? A new 124-page book usefully expands the easily-available source material for the history, and provides a new and questioning preface. Challenging Moskowitz.

“Sam Moskowitz’s The Immortal Storm is regarded by many as the definitive history of US fandom in the 1930s, but several contemporary fans either presented alternative versions of events or took issue with the book’s selectivity (New York-centrism in particular) and partisanship. Rob Hansen has compiled and introduced this collection of relevant fanwriting by Allen Glasser, Charles D. Hornig, Damon Knight, Jack Speer, Harry Warner Jr, Donald A. Wollheim and T. Bruce Yerke.”

Free in various digital formats, but donations are encouraged.

The Heart of the Hollow World, a complete 2017 graphic novel adventure in the Journey to the Centre of the Earth / Edgar Rice Burroughs / pulp adventure style, with a learned protagonist from Rhode Island. It’s free online. 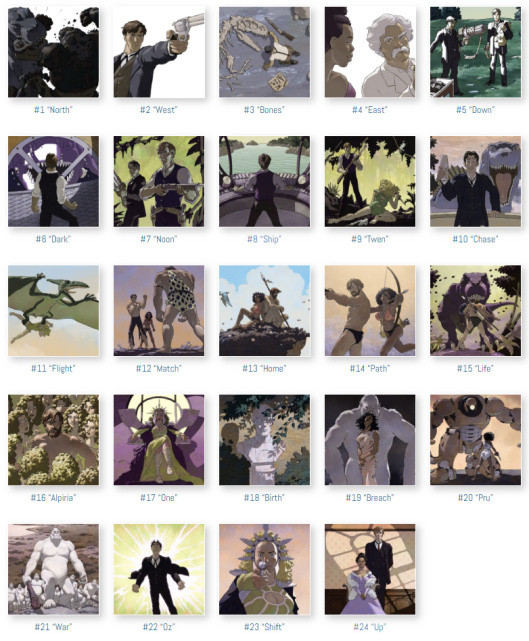 Originally a showcase for Doug Lefler‘s Scrollon comics reading app for iPhones and iPad, and now also available via a Web browser in a player. It uses a gutter-less format, akin to a scroll-painting.

His new Story Attic looks like an interesting outlet for those who can tell old-school adventure stories in this new visual form. The storytelling is top-notch. 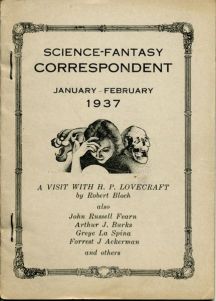 Joshi’s bibliography lists it as “fictional reminiscence” re: its reprint in the book Lovecraft At Last, and comments elsewhere reveal it to be a “hilarious” bit of humorous writing. A little further digging reveals it to have been reprinted more recently in the appendix of H.P. Lovecraft: Letters to Robert Bloch and Others.

An earlier and fuller sales listing for the original zine has found its way to the Amazon description, and this notes…

In the story, Lovecraft is depicted as eating the writer of the story. Lovecraft comments separately “…I seldom eat people alive except for Sunday dinner. As a general thing, I prefer human flesh cooked; and I generally avoid authors as a diet, since they tend to be lean and tasteless.”

Regrettably the story/zine is not scanned and on Archive.org or in the Hevelin online collection. I imagine a crowd-funder for a comics adaptation of it might do rather well.

This session aims to look at the relationship between archaeology and popular culture.

How has archaeology influenced popular culture (e.g. the influence of archaeologist Margaret Murray’s research on H.P. Lovecraft’s story, “The Call of Cthulhu”)?

How has popular culture influenced archaeology (e.g. the role of Indiana Jones in the origin stories of many archaeologists today)?

How does the appearance of archaeology in various mediums of popular culture influence public perception of our field (e.g. archaeology within video games like The Sims 4: Jungle, Stardew Valley, and the Tomb Raider franchise)?

How can archaeology in popular culture be used to educate the public about our field and the archaeologists within it (e.g. the documentary television show Wild Archaeology)?

And what happens when the archaeology being shared with the public is incorrect, misappropriated, and pseudo-archaeological (e.g. television shows like Ancient Aliens and America Unearthed, books like Chariots of the Gods)?