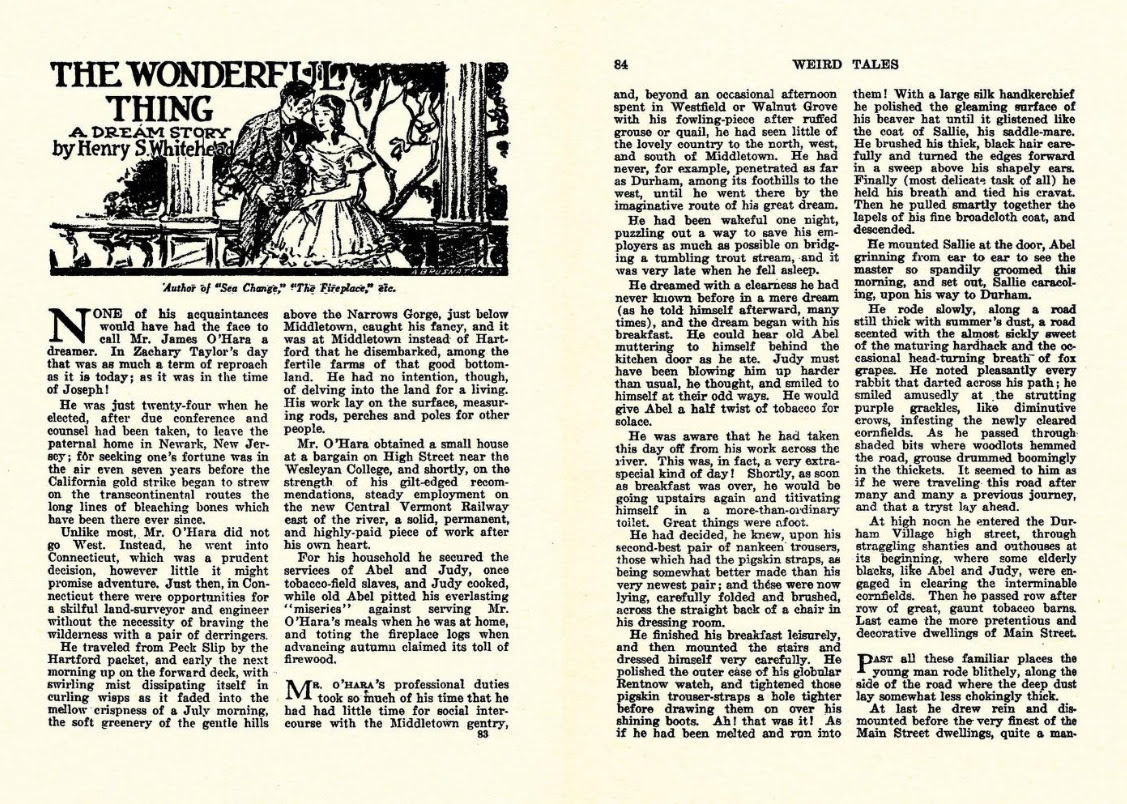 The new Short Ghost and Horror Collection 062 also has “He” by Lovecraft, and again has Poe.

Thanks to Gregory for letting me know about a new podcast. For Henrik Moller’s 150th podcast last week, he interviewed (in English) living members of the ‘Providence pals’…

The first wave of serious Lovecraft scholars started out in the 1970s. [In the U.S.] They called themselves ‘The Providence pals’. This is the story of how they helped Lovecraft to become recognised as a serious literary author [at a crucial time].

A new Voluminous podcast, in this case a live audience reading of Lovecraft’s letters. Voluminous: Live from NecronomiCon reads from the Hartmann letters…

an exchange of letters published in the newspaper between a local astrology enthusiast and the astronomically inclined HPL.

If you want a taste of what Weird Tales readers found so alluring about ‘star’ author Edmond Hamilton, his “The Metal Giants” (Weird Tales, December 1926) is now a new one-hour reading on Librivox.

Lovecraft called the crowd-pleasing formula writer “indefatigable & repetitious” and he assured a correspondent that, if he were to enter the field of ‘interplanetary fiction’… “you may depend upon it that I shall not choose Edmond Hamilton [as a model]”. That said, in 1926 Lovecraft did admire his “The Monster-God of Mamurth” tale, and I recall that they met at some point and got on well. He was also surprised to find he liked the Hamilton tale “Child of the Winds” in the May 1936 Weird Tales (“Hamilton(!!)” he exclaimed in a letter).

While searching for the name, I found more evidence for the influence of Kipling’s seminal “With The Night Mail” on science-fiction…

“… an article in the February 1922 Science and Invention, ‘10,000 Years Hence’. Howard Brown provided a stunning illustration of floating health cities (like huge health farms) kept aloft in the upper atmosphere by power rays drawing their energy from the sun. Gernsback described how these cities could be directed to move around the Earth [keeping pace with the sun], a concept one might believe inspired two later noted works of science fiction, Edmond Hamilton’s “Cities in the Air” (1929) and James Blish’s Earthman, Come Home (1955), were it not that neither author knew of the article.”

The above is from the pulp/early SF survey book The Time Machines, Liverpool University Press, which does not mention Kipling even once.

Ah, but these authors would have known of Kipling, the obvious source for such ideas. The direct inspiration being drawn from “With The Night Mail” will be obvious to anyone who has read it. Kipling’s cloud-breakers + permanently aloft sun-powered airships = “Cities in the Air”. Kipling’s giant and ascending ‘consumptive’ hospital airships = hospital cities in the upper atmosphere.

Since the article and Hamilton’s “Cities in the Air” (much enjoyed by pulp readers of the time, it seems) are now public domain, they might even be overhauled and retro-fitted to fit with Kipling’s “With the Night Mail” / Aerial Board of Control universe. In fact, much else that was published in the 11 issues of Gernsback’s short-lived Air-Wonder Stories seems on the face of it to be fair game for such a thing.

New from master audiobook reader Horrorbabble and free on YouTube, “The Hunters from Beyond” by Clark Ashton Smith. 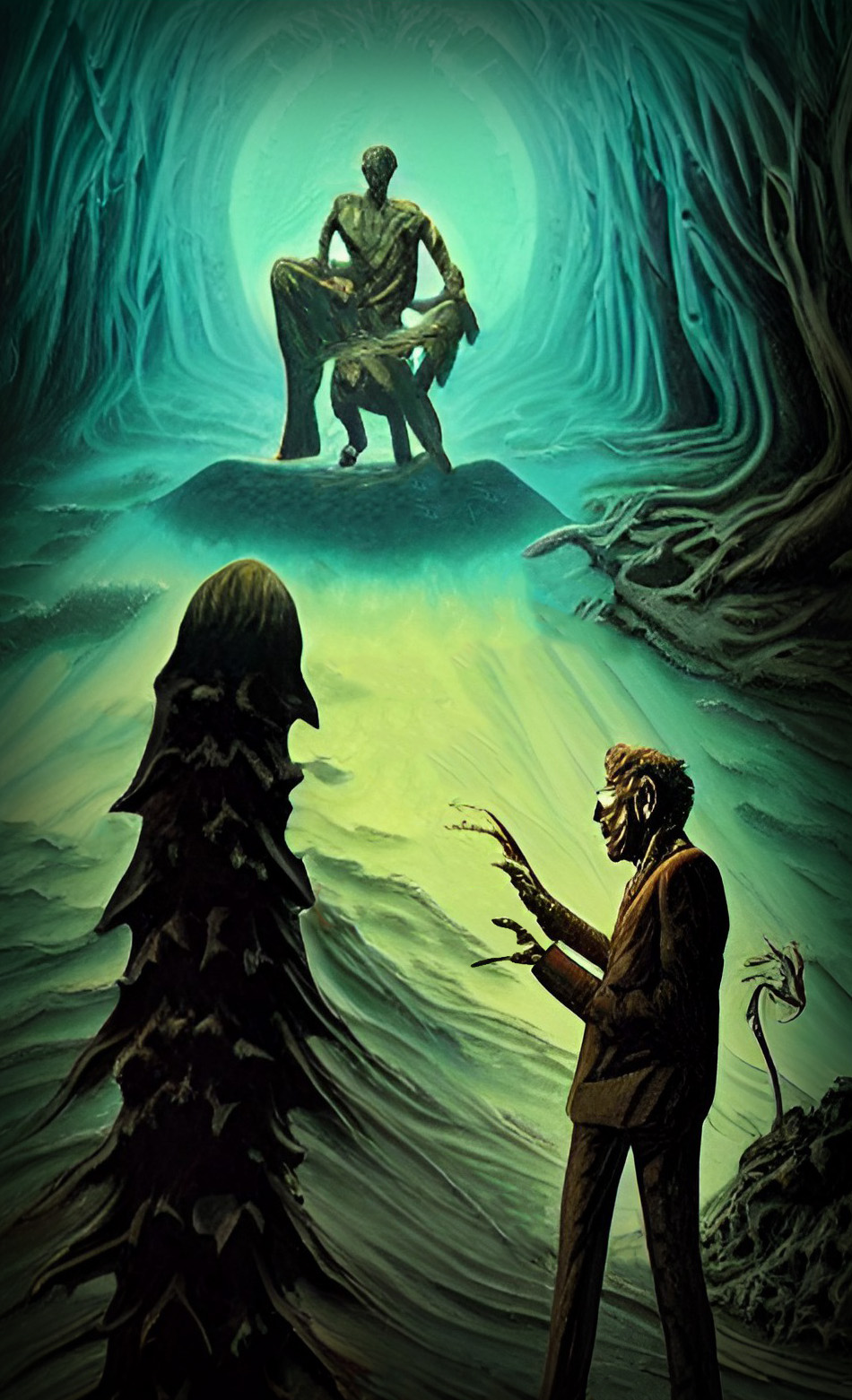 Also new, an audio reading of “Beyond the Great Wall”, a Smith poem that appeared in Asia magazine in 1924. 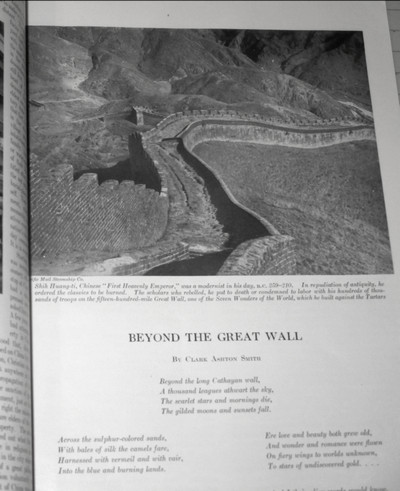 The New Yorker Radio Hour, “Neil Gaiman on the Power of Fantasy in our Lives”. 18 minute podcast, link also has direct .MP3 download link. Starts at 2:10, and there are then ads about a third of the way through the interview. 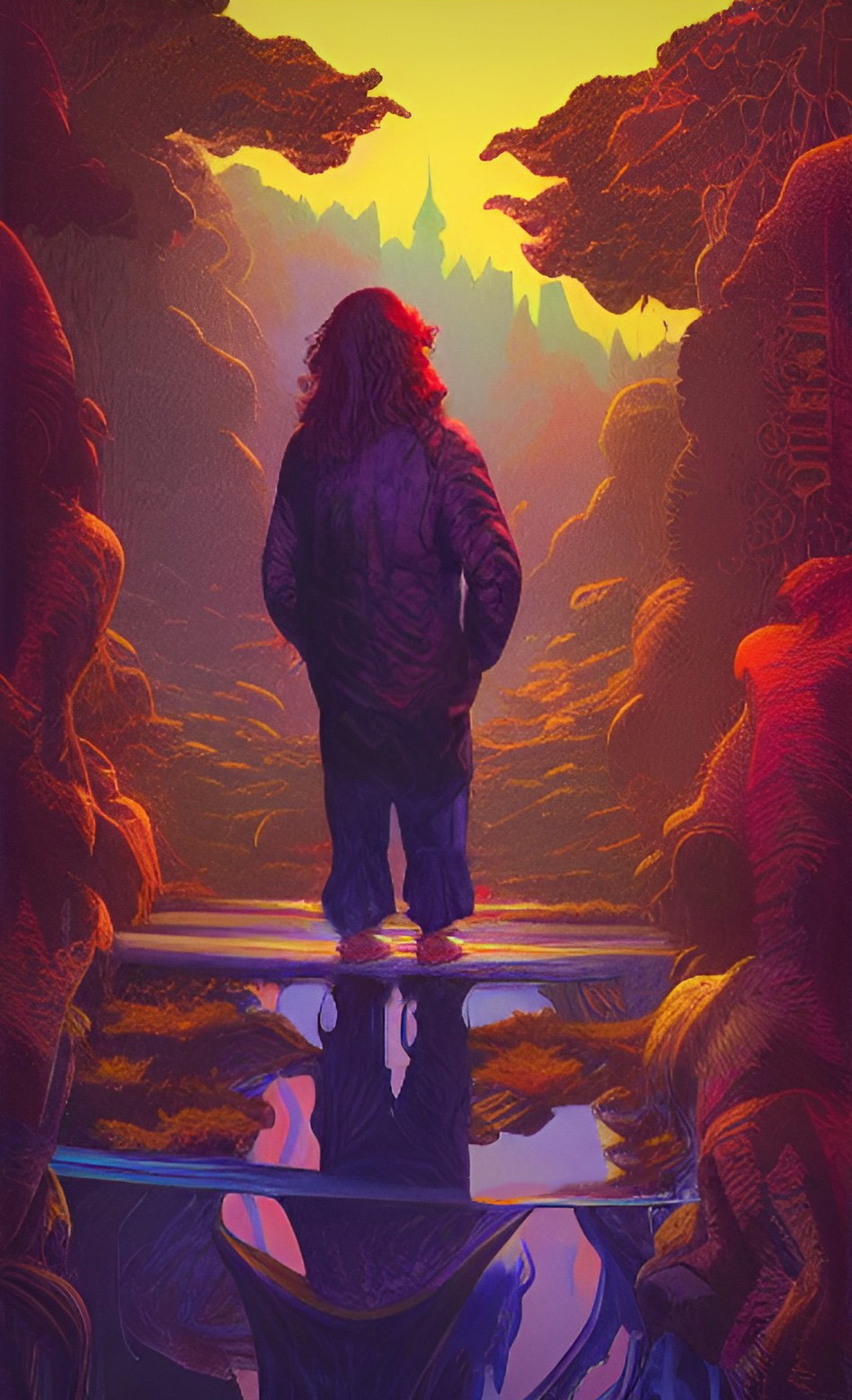 New on Librivox, Conan Doyle’s book The Last Galley, Impressions and Tales (1911). This is from before Doyle’s marked turn to spiritualism. 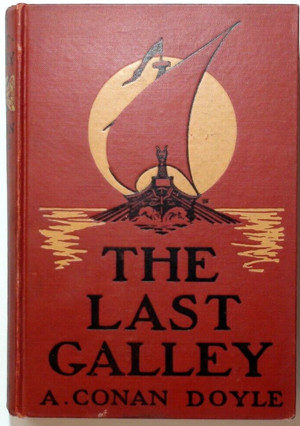 Doyle writes in his introduction…

The first half is made up of a series of pictures of the past … there is a region between actual story and actual history which has never been adequately exploited. I could imagine, for example, a work dealing with some great historical epoch, and finding its interest not in the happenings to particular individuals, their adventures and their loves, but in the fascination of the actual facts of history themselves. These facts might be coloured with the glamour which the writer of fiction can give…

The Academy remarked, in a review of the book on publication in 1911, that the evocations of the first section would make an excellent accompaniment to a tiresome journey…

The classical section, consisting of some 124 pages, is extremely well done and transports us into the atmosphere of the period in which the tales are told.

In the Librivox reading this historical section runs for three and a half hours.

In the eight stories that then make up the second half of the book, we end with “The Terror of Blue John Gap”. This is a upland monster-horror set in and beneath the Peak District of England, where the Midlands rises to meet the rocky North. The specific location it was based on would likely be Treak Cliff Cavern near Castleton, a Peak mine since Ancient Roman times and a source for ‘Blue John’ rock which the story title alludes to. The cave played a key role in the discovery of the principle of evolution by Erasmus Darwin.

It’s only noon over in the USA, and I guess many are only just emerging in search of breakfast. But a quick tickle of the search tools at 6pm in the UK brings some early 132nd Birthday news…

* Some podcast activity already detectable via search. A lecture on “Lovecraft & the Occult – historical & literary influences on the Cthulhu mythos”. No idea what it’s like, but I like the look of the presenter and studio. He makes an effort. Nerds RPG Variety Cast did a podcast to celebrate H.P. Lovecraft’s birthday by discussing Lovecraftian films. Some story readings on YouTube, several in Spanish, some still to be broadcast later today.

* A curious coffin-shaped magazine posted on eBay. Not sure if it’s a birthday thing. Apparently only 10 have been made. 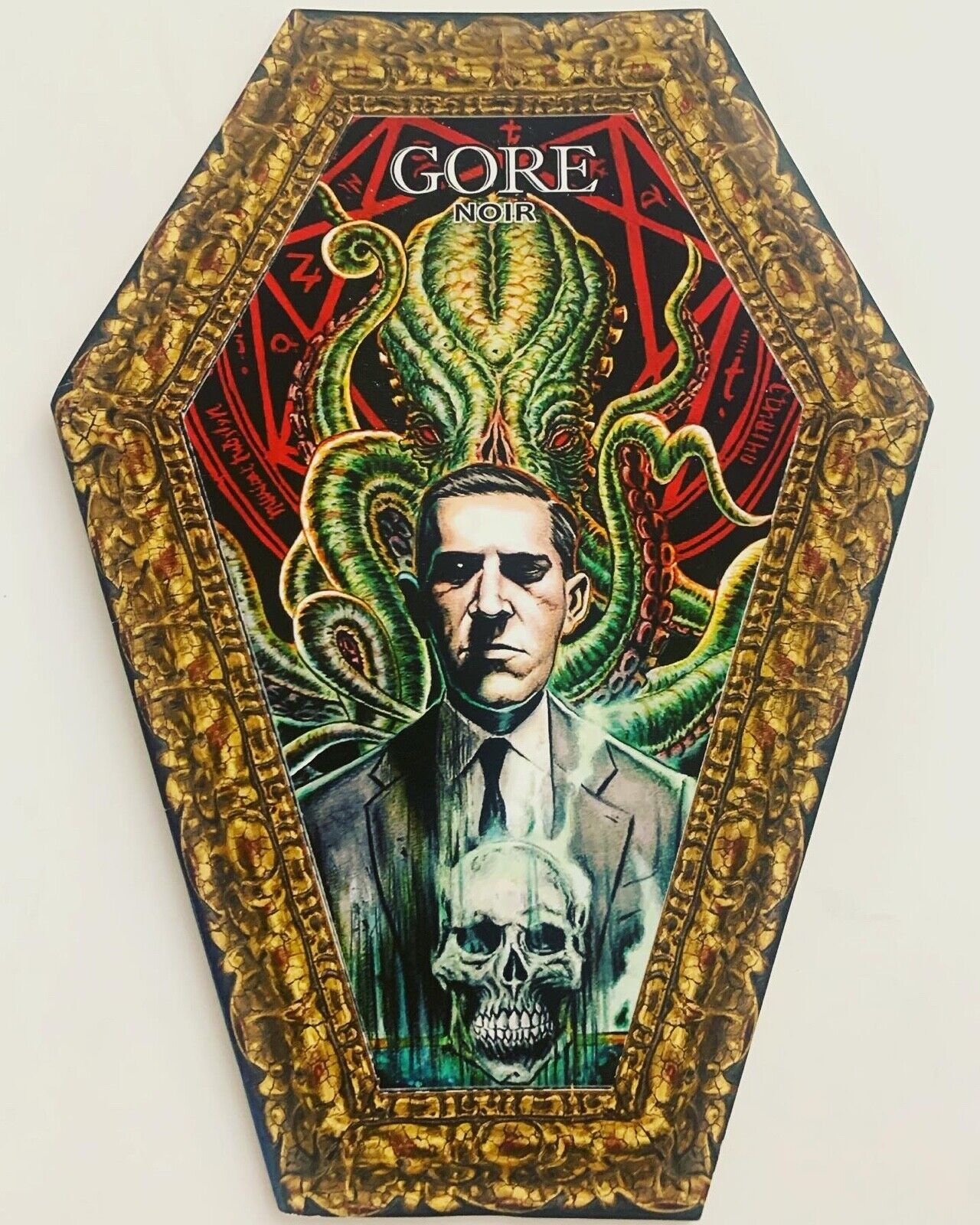 A new episode of Voluminous, reading and discussing one of Lovecraft’s letters. Oddly enough I’ve just started properly reading (rather than occasionally dipping into at random) the Donald Wandrei letters, and this is one of those letters.

The Brown Digital Repository has another typescript which is [incorrectly, by Barlow] labeled as “The Materialist Today”, but it is a different essay also called “Remarks on Materialism”. This longer essay does not appear to have been published, but if you’re interested in more of HPL’s thoughts on cosmic matters it’s worth taking a look at.

It seems to have been pieced together by Brown archivists or others, having appeared in very scattered form on the backs of letters sent to various correspondents “between 1927 and 1932”. The general practice of the Lovecraft circle’s letters seem to be that one re-used paper by writing letters on the reverse of failed manuscripts, or texts superseded by a good printed version, or on old carbons.

Update: It actually appears to be a late typing of “In Defence of Dagon”, an essay already known. My thanks for the commenters (see below) for pointing this out.

Also in audio. New on Archive.org, R.E. Howard’s “Wolfshead” in a new 58 minute public domain reading. Also “He” and “The Shunned House” by Lovecraft.

A new Voluminous podcast, ‘Elizabeth and the New York Boys’. Elizabeth referring to the two respite visits he took, via two ferries from New York City, to reach the more sedate Elizabeth. Which he called Elizabethtown…

Elizabethtown is a balm, a sedative, & a tonic to the old-fashion’d soul rackt with modernity.

Also a purgative of a sort, as due to…

… he quickly wrote his first story in a long while. He also later dreamed of the place, visiting it in a dream with Benjamin Franklin.

The rest of the letter is a whirlwind of people and places, including writing “The Shunned House”. All of which is hard not to see as effectively displacement activity which served to mask the impending collapse of his short marriage to Sonia. This circumstance and timing also helps to illuminate the final “elbow” in “The Shunned House”.

Now listed on Hippocampus, Songs from Lovecraft and Others by S.T. Joshi. Sheet music with audio download code.