A few more items added to the Open Lovecraft page…

* Oliver Hedegaard Holm (2005), “Skygger Over Tiden: it studie i forfatteren H.P. Lovecraft som oversaettelsesobjekt. (In Danish with an English summary as an appendix. Title translates as: “Shadows Over Time: H.P. Lovecraft as an object of literary translation”. Examines the elements that characterise Lovecraft’s fiction, and from this suggests a set of criteria to assess the validity of a foreign-language translation of his stories).

Online gallery of work shown at the 2010 California gallery show “At the Mountains of Madness: a tribute to the writings of H.P. Lovecraft”… 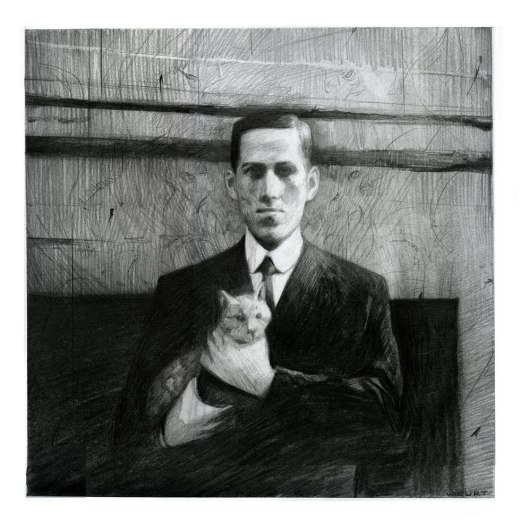 Above: Wesley Burt, “Lovecraft and feline”.

The Smithsonian magazine has a long article on “The Great New England Vampire Panic”. The story is based on the work of a consulting folklorist at the Rhode Island Historical Preservation & Heritage Commission, who has documented…

“80 exhumations […] concentrated in backwoods New England, in the 1800s” […] “The public hysteria almost invariably occurred in the midst of savage tuberculosis outbreaks”

Gallerie Nomad is putting on a Lovecraft art show in October, in Providence… 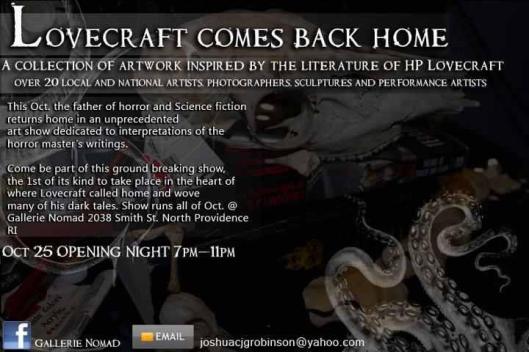 The Sword and Mythos doorstopper anthology, set to combine sword-n-sorcery with Lovecraft’s mythos, is now fully funded on IndieGoGo. 42 hours left to “stretch” the project with some additional donations.

“The participating artists have been hand picked for their natural disposition towards the strange and deranged. … There will be paintings, drawings and sculptures of subjects that will deviate, distort and mystify. Human oddities, anatomical wonders, freaks, geeks & gaffs. Step right up and peek inside the beinArt Collective’s cabinet of curiosities! The beinArt Collective was formed to increase public awareness of strange figurative art, in galleries, online and in print [and aims to be] testimony to a huge international movement of figurative artists who have resisted current trends in the art world and remained true to their artistic vision.”

Barlow’s rare Dragon-Fly zine, up for sale on eBay. 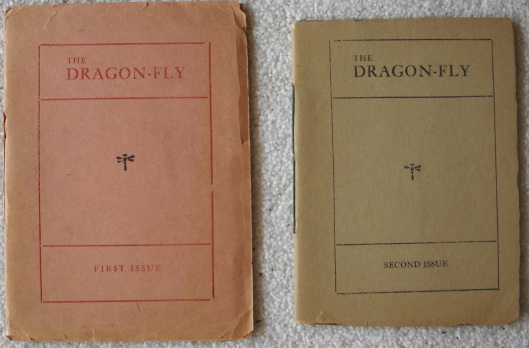 “27th [October 1918] — Government officials, Watch and Ward Society men and United States troops from Camp Devens raid two houses on Cumberland Hill, [about four miles north of Providence] arresting 40 people. Proprietor of one house uses shotgun and troops are ordered to shoot to kill. One of Watch and Ward men is shot in the leg by man who really had attempted to put bullet into injured man’s abdomen. Both vice places are broken up by direction of Government authorities, because soldiers and sailors were frequenting them. Many robberies had been complained of. Most every man arrested in the raid was armed with gun and brass knuckles [knuckle-dusters].” — from news summary of the month’s events, Providence Magazine, Nov 1918, p.605.

“An influential watchdog organization, bankrolled by society’s upper crust, it actively suppressed vices like gambling and prostitution, and oversaw the mass censorship of books and plays.”

Evidently they were also active in areas close to Providence. They were originally the New England Society for the Suppression of Vice. More details here. Lovecraft mentions them in Selected Letters III, musing idly on the prospect of being sent a copy of Venus in Furs for Christmas…

“I certainly wouldn’t get het up and call in the repressed perverts of the Watch and Ward Society of Boston.”

“In 1926 [5th April], the [Watch and Ward] society challenged a Herbert Asbury story called “Hatrack”, published in H.L. Mencken’s American Mercury. In Boston, with police, press, and a large crowd in attendance, Mencken sold a copy of the magazine to society president John Chase. Mencken was arrested. In the ensuing trial [6th April], the magazine was found not to be obscene, and Mencken was acquitted. Mencken proceeded to successfully sue the Watch and Ward Society for illegal restraint of trade.”

Presumably many pulp authors and editors felt some relief that the Watch and Ward Society had taken such a decisive legal pummeling.

Was it something I said? Last weekend I posted on this blog about the need for a graphic novel of Lovecraft’s life. I mentioned 1919.

Yesterday, the great Alan Moore announced his return to graphic novels… with no less than a work titled Providence, set in 1919 and starring H.P. Lovecraft. The ten-issue series will be published under the imprint of Avatar Press.

I found a video of a recent conference paper…

Christos Callow (University of Lincoln, UK), “The Key to the Gate of Dreams: Searching for Utopia in H.P. Lovecraft’s Dreamlands”. Given at the 13th Conference of the Utopian Studies Society, July 2012.

More noting of the titles of papers given at recent academic conferences:

James Machin (Birkbeck College, UK), “Music Against Horror: H.P. Lovecraft and Schopenhauer’s aesthetics”. Given at the May 2011 academic conference on Literature and Music.

Jonathan Paquette (Community College of R.I./University of R.I, USA), “H.P. Lovecraft and the Quebecois”. Given at the New England Historical Association Spring Conference 2012.

Christos Callow (University of Lincoln, UK), “The Key to the Gate of Dreams: searching for utopia in H.P. Lovecraft’s Dreamlands”. Video available. Given at the 13th Conference of the Utopian Studies Society, July 2012.