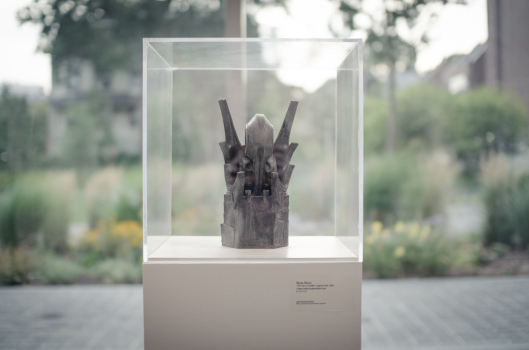 Though I raised an eyebrow over the passing claim that the Providence Athenaeum… “was a favorite reading spot of HPL”. There is no evidence for this, that I know of. Nothing in the Selected Letters, Collected Essays, or I Am Providence. Lovecraft did write the poem “Providence Amateur Press Club (Deceased) to the Athenaeum Club of Journalism” (24th November 1916), but that was addressed to the Athenaeum of Harvey, Ill. (Collected Essays I, p.39). There is only one instance of Lovecraft including the Providence Athenaeum on the tours he gave to visiting friends, for Brobst in 1932. Presumably as an example of unmodernised 18th century architecture still housing its original institution, and of course for the Poe connection.

In honor of H.P. Lovecraft’s birthday this week, we’ll put up this NecronomiCon 2013 formerly exclusive episode [of the Six Foot Plus horror music podcast] for one week only.” 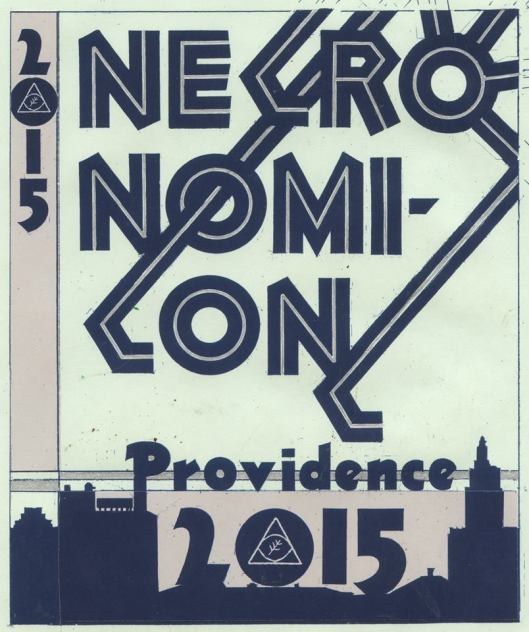 * Mourning the death of his uncle Franklin Chase Clark (d. 26th April 1915). Presumably he attended the funeral service and burial. (It would be great to have a fringe exhibition in 2015 on the life and work of Franklin Chase Clark).
* Giving away his boyhood stamp collection to young cousin Phillips Gamwell, with whom he had first learned the joys of correspondence by letter, and had tested his face-to-face tutoring skills. Phillips Gamwell would later die young, on 31st Dec 1916.
* Was starting to make his formidable presence felt in amateur journalism, despite his ill health.
* Publishing his The Conservative political journal, despite his ill health.
* Running a local literature appreciation and writing group for mostly Irish-American youths, despite his ill health. With the group, publishing the first Providence Amateur amateur press journal in June 1915.
* Reading the news of the First World War in Europe, of Zeppelin bombing raids on his beloved England, and the German threat to shipping off the New England coast.
* Writing poems, including one deploring the sinking of the Lusitania, a passenger ship sunk by a German submarine.
* Corresponding heavily with Kleiner and Moe, and others. To one correspondent in this year he declared it “almost an impossibility” that he would write fiction.
* First hearing something of the new Blue Pencil Club of Brooklyn, New York City.
* Posing for his photograph.
* Still enjoying The All-Story Munsey proto-pulp magazine.
* Writing monthly astronomy articles for his local newspaper, and a series for another newspaper.
* Frequently enjoying the silent cinema of the day. He loved Chaplin and would have seen Chaplin’s 1915 films (1915 seems to have been Chaplin’s big year, his breakthrough into mass popularity?), and he probably also saw The Raven (1915, stylised Poe biopic), and the famous movie Birth of a Nation (1915).
* Hearing about Houdini’s stage shows in Providence (at Keith’s Theater, week of 1st March). He probably didn’t see him then, or he would have mentioned it when he later worked with Houdini. Lovecraft had seen him at Keith’s in 1905.

A three part audio recording of the panel discussion on the History of Necronomicon Press, made at NecronomiCon 2013. 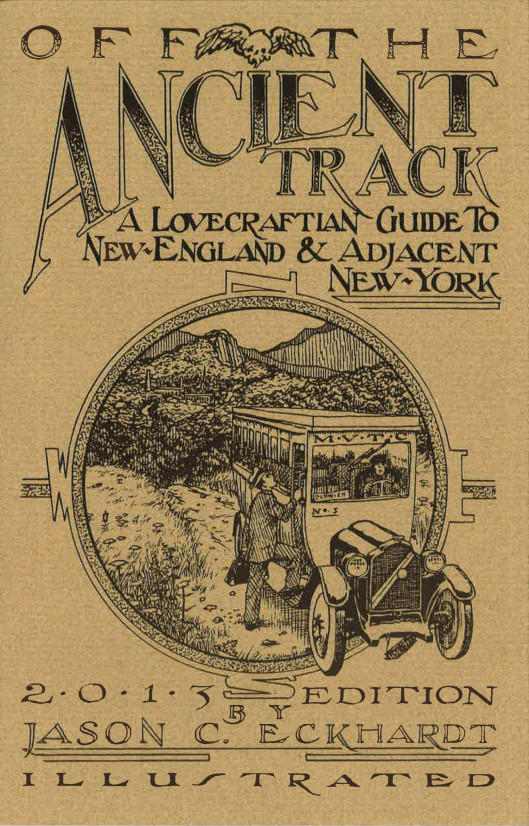 Weird Tales has a NecronomiCon 2013 report by Darrell Schweitzer.

On display as part of the NecronomiCon 2013 exhibitions, a postcard that H.P. Lovecraft sent to Donald Wandrei in 1934, with his own ink drawing overlay and self-portrait. Part of the Brown University collection… 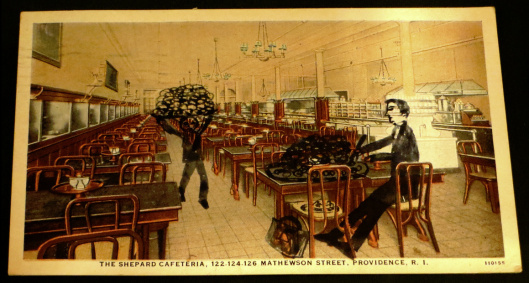 It presumably shows his black writing materials case, seen resting at the foot of the chair. This was commented on by several people in Lovecraft Remembered, but was never photographed only photographed once.

The Shepard Cafeteria postcard as a clean scan… 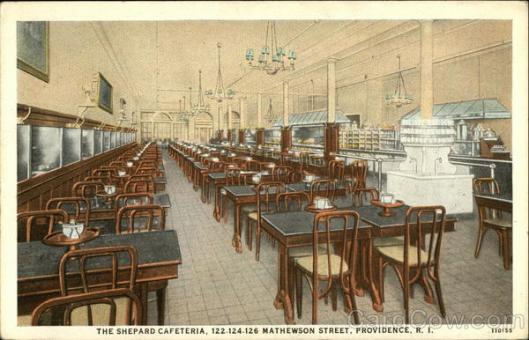 “[the Mathewson St cafe] was owned by John Shepard [III], “a radio mogul, [who also] owned department stores in Boston and on Westminster Street in Providence.” (Providence, Arcadia Publising, p.93)

Part five of the NecronomiCon 2013 talk on the biology of Lovecraft’s creatures: Shoggoths, with two more sections on shoggoths still to come…

“I see the Shoggoth as a endosymbiotic organism as well, being far more complex than the lichen (or human for that matter). Given their extreme plasticity and adaptability, the Shoggoth is probably a conglomeration of eukaryotic and prokaryotic cells.”

More sections of the recent NecronomiCon 2013 talk on the biology of the Old Ones: Derleth’s role in developing the taxonomy, and Lovecraft’s own taxonomy.

My unofficial round-up of NecronomiCon Providence 2013 news and links…

* Rough photo of the cover of the Providence Phoenix…

* Fred S. Lubnow has kindly placed online Part I of the talk, “Human Interpretations on the Biology and Evolution of the Old Ones”, given at NecronomiCon 2013.

* Odd Things Seen has some fab photos, including a photo of the lobby poster at the con, also showing to full effect the sumptuous decor of the Biltmore…

* Penelope Love remembers the College Hill Walking tour and the convention itself, with photos.

Fred S. Lubnow has kindly placed online Part I of the talk, “Human Interpretations on the Biology and Evolution of the Old Ones”, that he gave at NecronomiCon 2013. Once all the parts are posted, then I’ll be adding this to the Open Lovecraft page.

“The talk is on the biology and evolution of the Old Ones, and I have elaborated on it a bit. A number of people have asked for a copy of the talk, and I thought it would be best to put it onto the blog.”

My unofficial round-up of NecronomiCon Providence 2013 news and links…

* Lovely letter in The Providence Journal about meeting some Lovecraft fans by chance.

* Darkest of the Hillside Thickets (the Saturday WaterFire evening band), has the official stage photos online, and apologies for the technical flummox…

“the power went out on half the stage after just a few songs, leaving us with only 2 of the 4 planned guitars including the bass guitar”

* Michael Bukowski (Yog-Blogsoth, one of the gallery exhibitors) has a convention report with pictures of artwork.

* Photo set of the Unpacking of the bronze bust of HPL…

* Inside the Cthulhu Factory Nazo Lab…