The Viking publishing house published the “The Call of Cthulhu” and other stories in Estonian five years ago, in an award-winning translation. This newest [Nov 2022] translated collection builds on that and continues readers’ journeys through Lovecraft’s landscapes, principally in and around the fictional Massachusetts town of Arkham and the Miskatonic river. Though also taking the reader on trips to other worlds, alien dimensions and distant planets.

WARNING: A printing problem has been discovered, and the publisher now advises… “Please do not purchase the book until the problem is investigated and fixed.”

The Collected Letters of Robert E. Howard, Volume 3 (1932-1936). According to Amazon this is now published. Which means the Robert E. Howard Foundation Press is to be heartily congratulated, as it now has all three volumes published as affordable paperbacks.

I see there was also a new issue of The Dark Man: Journal of Robert E. Howard and Pulp Studies (12.2), dated December 2021 and available March 2022 on Amazon. Among other items, an article on “Howard and Strange Tales” and a review of the expanded book The Weird Tales Story.

I’m pleased to see that the Two Hearts That Beat as One: an Autobiography by Sonia H. Davis book project has now been funded on Kickstarter, and with three days to go. Hopefully this will be Sonia’s unpublished autobiographical notes and draft, which have so far only been available to personally consult in her archives. 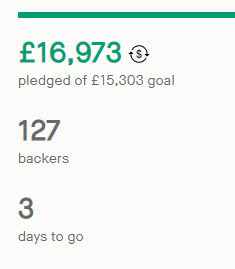 The sumptuous Mnemos edition of Lovecraft’s Horror Tales is soon to publish in France. Amazon lists it as 25th November 2022. 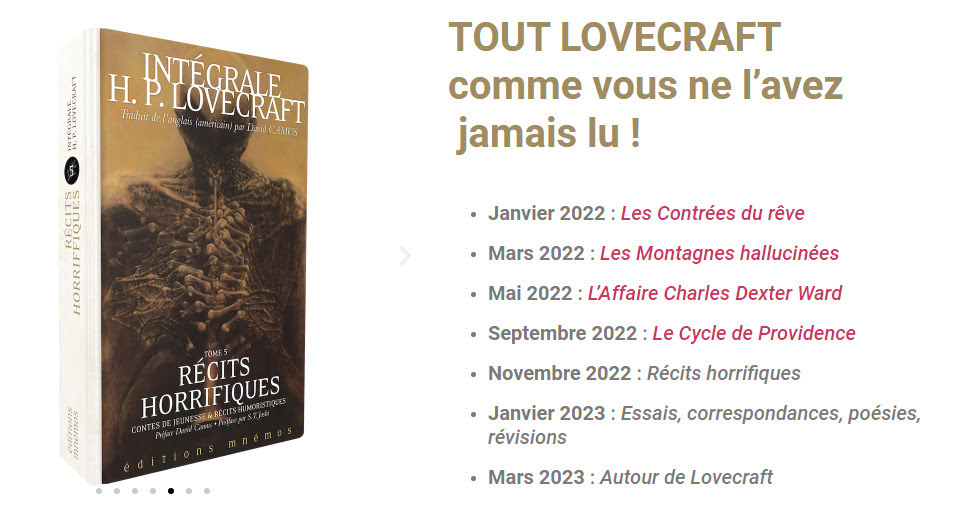 It appears this will complete their new multi-volume translation of the main fiction. Still to come is ‘Essays, correspondence, poetry, revisions’ and finally ‘About Lovecraft’ (although that may be a mis-translation for ‘The Lovecraft Circle’?).

Gou Tanabe’s 2020 “Innsmouth” graphic novel is now available in Italian translation, in a two-volume set. In terms of size it’s a real graphic-novel, being presented as two slabs totalling 480 pages… 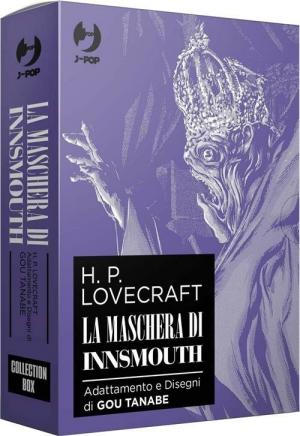 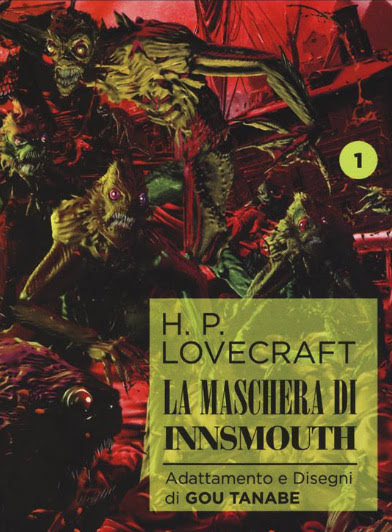 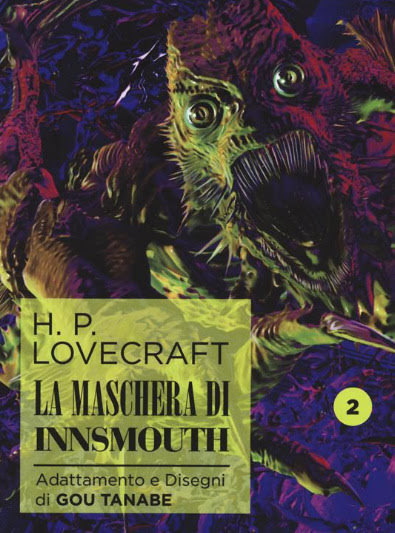 Despite the size it’s rather amazingly listed at only 15 euros for the box-set, by the Italian blurbs. I’m not sure how they can produce it at that price, unless perhaps the Italians have a different sort of euro. Perhaps there’s a huge market for such things in Italy and/or it’s very cheaply manga-style printed in Japan and then shipped to Italy on a very slow tramp freighter? Or perhaps the market has over-corrected, and the fabled paper shortage has now turned into a glut?

My thanks to Martin for a blog comment pointing out that the new volumes of Lovecraft’s letters, Miscellaneous Letters and Letters to Woodburn Harris and Others, appear to be shipping. I had spotted Miscellaneous Letters listing on Abe a week ago, usually a sign that a new book is shipping. But I wasn’t sure. On looking at Amazon UK today, I see they have “20th October” and appear to be willing to ship. 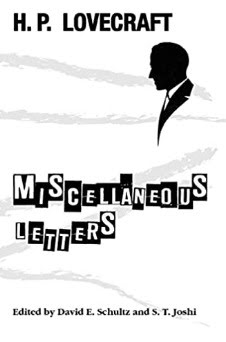 However, note that neither book can yet ship to an Amazon delivery locker in the UK. I assume this means Amazon has no ready-to-go UK warehouse stock. Other older volumes in the series can be shipped to your UK Amazon locker, so I assume that Amazon pre-prints some print-on-demand books to hold in its warehouses for fast shipping. It is thus likely waiting for stock on the new books. Of course, you can also order from Hippocampus, and may also find combo deals there with other items.

Congratulations to all concerned in producing these volumes, and for swinging into sight of the ‘finishing-line’ for the series. According to S.T. Joshi’s blog post on the matter, the final volumes left to come are now…

* Letters to Hyman Bradofsky and Others

+ the single volume mega-index to all the published volumes of letters, presumably also including volumes published by others (e.g. O Fortunate Floridian, the Barlow letters from Florida University Press).

A promising Kickstarter for a proposed Two Hearts That Beat as One: an Autobiography by Sonia H. Davis book. This appears to be set to contain the manuscript autobiography of Lovecraft’s wife, “reproductions of both issues of Sonia’s zine The Rainbow”, and “photos and papers from her archives” plus the joint play Alcestis. All wrapped in a handsome book.

This autobiography appears not to be the already published “European Glimpses” + “Howard Phillips Lovecraft as His Wife Remembers Him”, since the archives list for the Sonia H. and Nathaniel A. Davis papers does show a number of folders of “Autobiography”…

I assume these have been transcribed and annotated, for the new book.

A new novel about Lovecraft’s friend Robert Barlow, El Asesinato de Robert Barlow (The Assassination of Robert Barlow, 2022), by Veronica Evers and available now in Spanish. It appears to be a murder-mystery police-procedural novel, set in the 1950s or perhaps into the early 60s in Mexico. A Lovecraftian homage, apparently. My translation and digest of the blurb…

Some years after Robert Barlow’s death, the historian Galo finds an unknown manuscript. It is a prequel to “The Call of Cthulhu”. This, he thinks, contains hidden keys relating to Cthulhu. Simultaneously, there is another and related mysterious death. Detective Acosta will not leave the cases unsolved, and he uncovers a whirlwind of old stories and unknown parts of Barlow’s life. He even has talks with William Burroughs and other beatniks, and discovers that his crumbling old Mexico City harbours some very dark places…

I can’t find out much more about it, and the dates are a little uncertain (Burroughs was in Mexico City in the early 1950s for five years, I recall, and so the tale may stretch into the early 1960s if the detective is pursuing the trail some years later?). There’s a YouTube recording of the author at a literary festival, though that may just be a reading rather than a Q&A. YouTube can offer no transcript to translate.

Apparently the “old Mexico City” was very different from the “new Mexico City”, and the author tries to evoke the latter. So I assume a lot of vintage local colour is involved, and I’d guess the author is also a knowledgeable citizen of the city. Level of gay content, and the angle it take on that… unknown. But it’s not being tagged as a gay novel.

No sign that Lovecraft appears in the book as a character, though if I was writing such a novel I’d at least have a cameo. Perhaps via a letter between Barlow and Burroughs that recalled the Lovecraft he had known.

A new Kickstarter hardback, showcasing what appears to be a personal collection of vintage macabre and strange poster art, 1862-1973 and said to be photographed from originals. 140 pages. It’s currently funded. 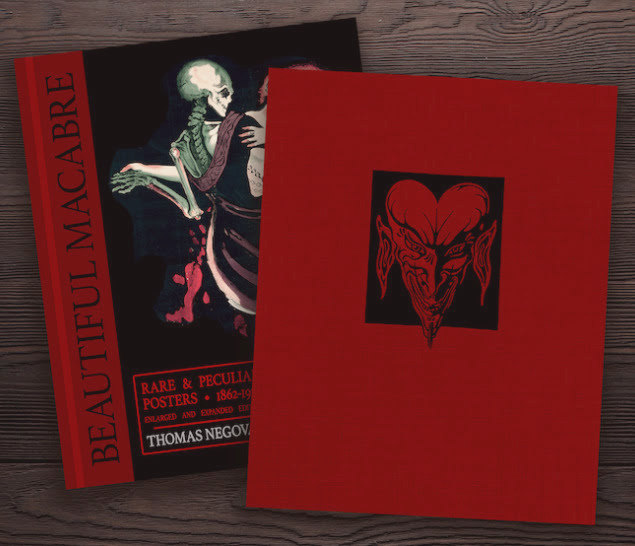 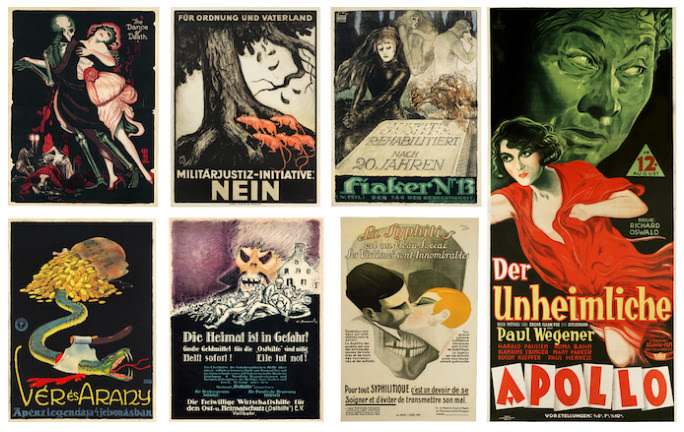 I wonder if there’s a gap in the market for a similar book that focuses only on vintage pre-1995 posters and substantial flyers that relate to Lovecraft and ‘Lovecraft inspired’? Though, admittedly, such material would still be in copyright. Still, one could put out a call for submissions, from those willing to dig into their archives in order to see their old work in such a book.

From Portugal, the new ebook Lovecraft e as Tradicoes Esotericas: Influencias do Horror Cosmico no Ocultismo (trans: ‘Lovecraft and the Esoteric Traditions: Influences of Cosmic Horror on Occultism’). In Portuguese. 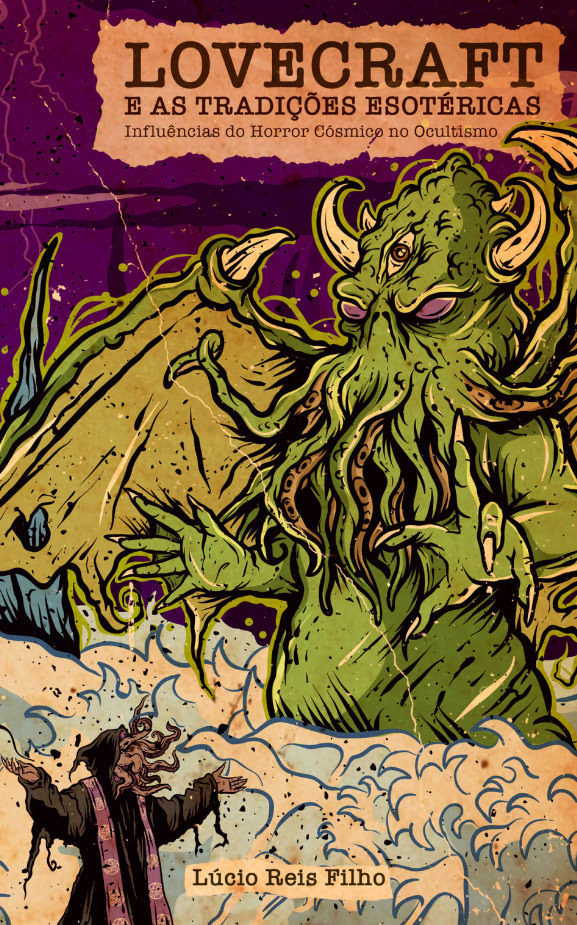 Here’s my translation of the TOC…

1. The Cold and Dark Vast of the Cosmos

2. Lovecraft: Posthumous Member of the Counterculture

3. From Abnegation to Cosmic Pessimism

4. The Dark Essence of the Cthulhu Mythos

5. The Occult Tradition and its Marks in Lovecraft

6. Cults of Cthulhu, its Fans and Devotees

7. The Culture of Fans as a Creative Microcosm

I can’t get the cover-artist name, but it’s nice work. I also like the retro mid-1980s thrift-shop feel it has.

The other book is still forthcoming. Due soon-ish is The Medial Afterlives of H.P. Lovecraft: Comic, Film, Podcast, TV, Games, with Amazon wobbling between late December 2022 / early 2023. It’s one of those academic… now, I was going to say “£80 tomes”. But the standard list-price for such things seems to have now jumped to £120 (roughly $140).

So… it’s one of those invitation-only academic £120 tomes, of the sort that can trap some good academic work in inaccessible volumes.

Discusses a wide array of medial forms, from film and TV to comics, podcasts, and video and board games.

Part of the Palgrave Studies in Adaptation and Visual Culture series. Despite the price, the academic salaries involved, and leftist hand-wringing about academic labour… they’ve used a raw and very obviously AI-generated image for the cover. 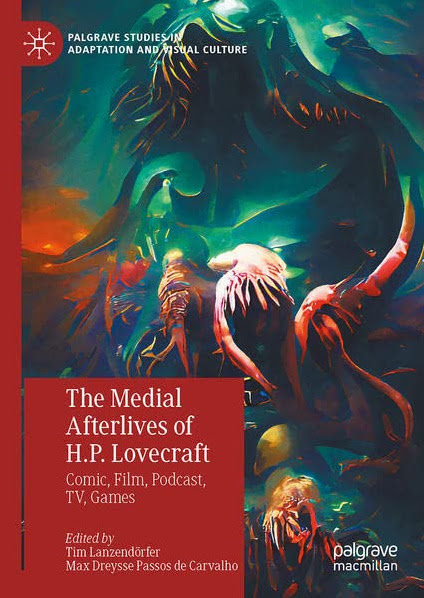 A new review by Arciapod of the graphic novel The Monstrous Dreams of Mr. Providence (2022), albeit reviewed from one of those annoying highly-compressed…

free preliminary, and likely unedited copy of this book

…of the sort that gets sent out for a graphic-novel review.

But his review usefully reveals that…

One’s enjoyment of this book is directly proportional to how much somebody likes or knows about H.P. Lovecraft. … people familiar with his works will get a far better appreciation for this story than others, and honestly without knowing a bit about him, the finer points of this may fly right over their heads.

Sounds good. Warning: the review has some big spoilers. The Arciapod review has only just been published, but it turns out the book has actually been out since June 2022. I had noticed it in passing, but until now had not heard about the direct Lovecraft connection.

Now… a while back Tentaclii noted the similar-looking ‘A Bestiary of the Twilight’ (Le Bestiaire du Crepuscule, June 2022), a French ‘BD’ (i.e. oversized graphic novel, often in hardcover) also featuring Lovecraft as a character. The French Lovecraftians had mentioned it, and I assumed it had not yet been translated.

Yet I now see that this ‘BD’ has the same 120 page-count as Mr. Providence, and has the same Parisian artist/writer in Daria Schmitt. A little digging finds European comics sources noting the name change. Yes, Le Bestiaire du Crepuscule has been re-titled as The Monstrous Dreams of Mr. Providence for the English edition, and since summer 2022 can now be enjoyed by English readers.

Only as an ebook, admittedly, but at a very reasonable price (probably around $5, for U.S. readers). If you want the dead-tree version it seems you’d have to get the French ‘BD’ and a phrasebook.

The news of this prompted me to see if there was an ebook of the graphic novel biography Some Notes on a Nonentity: The Life of H.P. Lovecraft. No, still just an out-of-print 2017 hardback.

New to me, the scholarly book Theology and H.P. Lovecraft (August 2022), a multi-author book in the ‘Theology, Religion, and Pop Culture’ series from Fortress Academic.

This collection of fourteen essays is the first sustained academic engagement with H.P. Lovecraft from a theological perspective. 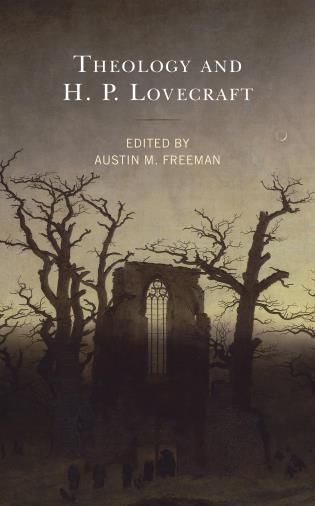 The book follows 2021’s survey Theology and Horror, from the same publisher. 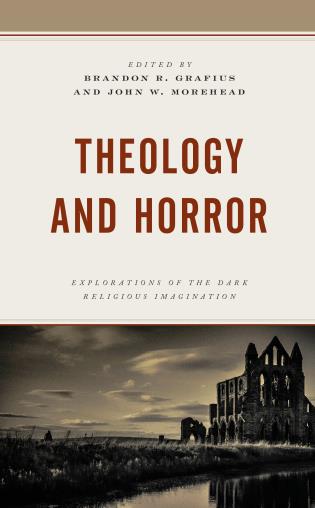