All links checked and repaired April 2022.

⚙ The Annotated “The Lurking Fear”. “Fear” was a Home Brew pulp ‘shocker’, which H.P. Lovecraft used to test the Catskill Mountains as a potential suitable location for his emerging horror stories.

⚙ The Annotated “Nyarlathotep”. My first venture into H.P. Lovecraft annotation.

⚙ The Annotated “The Cats of Ulthar”. August 2019, for Lovecraft’s Birthday.

⚙ A free sample essay from my book Lovecraft In Historical Context: the fifth collection (2014). “H.P. Lovecraft and Great Zimbabwe”.

⚙ A free sample essay from my book Lovecraft in Historical Context: the third collection (2013). “A Real Horror: on the 1918 flu epidemic in Providence”.

⚙ My draft “Selected bibliography on The Time Machine by H.G. Wells”. Created during my emerging scholarly interest in the early Wells, when I was writing a sequel to The Time Machine.

⚙ The Folk-lore of North Staffordshire: An Annotated Bibliography, England. Only of local interest. But we do have the setting for the world-famous supernatural tale Sir Gawain and the Green Knight, among others.

There are also some book reviews and a The Providence art of Whitman Bailey artbook on this blog.

⚙ No major books at present, though I have in the past given away three of these in PDF for a limited time. Watch this space!

⚙ RK – Rheinhart Kleiner: A Memoir. A new scan of the 1951 stencil-printed booklet by James Guinane, with my new annotations. With thanks to Dennis Weiler for the raw scans.

⚙ An early Lovecraft appearance in fiction: “The Black Druid” (1930). My annotated PDF of the Frank Belknap Long story.

⚙ Horace Smith, “John Edwards of the Ladd Observatory at Brown – Cockney or Cornishman?”.

⚙ The Alphabet of Walking: a new anthology, which I made as a little side-project from my book Walking with Cthulhu: H.P. Lovecraft as psychogeographer, New York City 1924-26.

⚙ London Reimagined: an anthology of visions of the future city. An old sampler I made, intended for classroom use.

⚙ Audio readings of Lovecraft’s “The Cats of Ulthar” and “The Moon-Bog”; plus a version of “The Boy Who Shuddered”, from the Brothers Grimm.

⚙ Some Places Known to Howard Phillips Lovecraft. Hi-res map of Lovecraft’s places in Providence. Not to be sold or re-distributed please. Omits: the Athenaeum (very little evidence of his connection with it); his childhood schools, the YMCA, and buildings/places variously claimed to have inspired his stories. There may eventually be a second map that covers the latter. 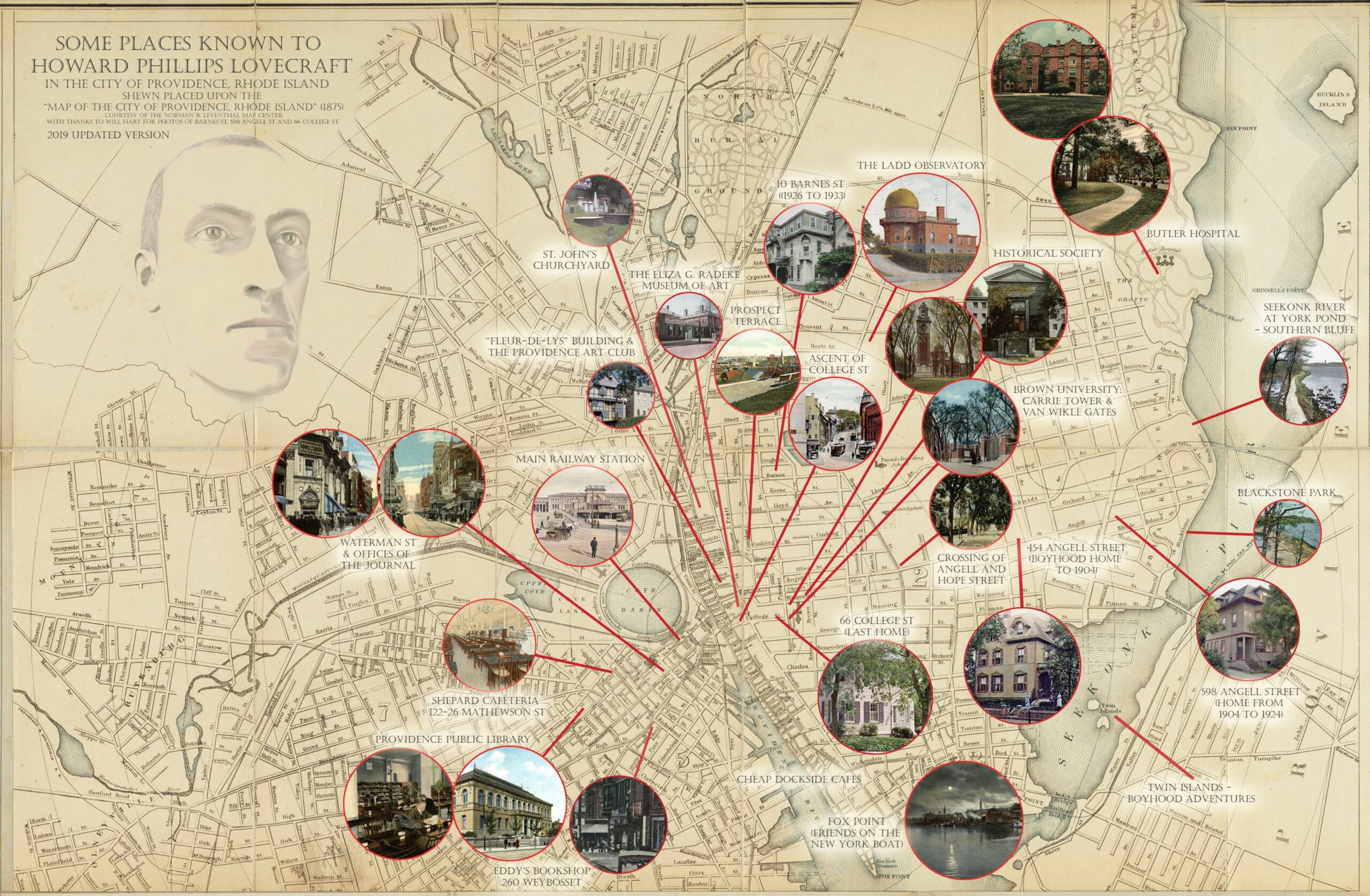