“the mystic sunset flaming beyond the antient Baptist steeple, the narrow colonial hill streets with their fanlights & double rows of steps, & the great outspread sea of roofs & domes & spires leading off to the purple western hills as glimpsed from old Prospect Terrace? Zeus! the charm & mystery of the violet early evening, when the lights of the ancient city below began to twinkle forth one by one! […] Why, Sir, modernity cannot exist for one who has really gazed upon the elder world!”

“the sunset, seen beyond the mystical spires and domes of the lower town from Prospect Terrace, always fill[s] me with a curious sensation of opening gates and about-to-be-revealed wonders”

“What I want [is] a seclusion amidst ancient scenes wherein I may cast off the actual modern world in a quiet round of reading, writing, & pilgrimages to quaint & historick places. I want to dream in an atmosphere of my childhood — to sit on Prospect Terrace with an old book or a pad & pencil in my hands.”

Thanks for reading Tentaclii. My Patreon patrons have now declined to $30 a month. After six months of intense daily blogging at Tentaclii I think it’s now safe to say that the Tentaclii revival has been a whole lot of work, but has not proven a success. This means that at the end of this month I’ll be taking the blog “Private”, making it entirely invisible to the public Web and available only to my Patrons on Patreon.

Newly on Archive.org this week, very clean and crisp scans of Oriental Stories. In layout/design ‘a Weird Tales clone’ and also edited by one Farnsworth Wright…

Newly on Archive.org is a nice clean scan of The Acolyte for Spring 1943, featuring one H.P. Lovecraft on “Poetry and the Artistic Ideal”. This is also on the Hevelin Fanzines collection in tiling per-page form, but now it’s also on Archive.org in complete portable PDF.

I’m pleased to see there’s a new episode of The Lovecraft Geek podcast with Robert M. Price, The Lovecraft Geek Podcast, 19-001. 19 presumably stands for 2019, and the 001 is self-explanatory. My podcatcher software refuses to download locally (“cannot verify talkshoe.com”), but it streams fine.

Price says at the start that he needs more questions sent in. I had sent in a list of questions by email last October, but he doesn’t seem to have got them. More questions are needed, to: criticus@aol.com

He notes that Ulthar Press has a set of Price-edited books lined up. Already published is The Mighty Warriors (summer 2018), his edited collection of new stories likely to interest those who like 1970s sword & sorcery action — with the twist that here we have… “aging once great heroes” rather than rippling youths.

Also announced was the book Narcotic Pnakotic Fragments (I think I heard that correctly, presumably a play on ‘necrotic’), a collection of his essays on the Mythos cycle, from Ulthar Press.

Sounding rather further off in time, and also from Ulthar Press, were various anthology titles. Most interesting to Lovecraft scholars is probably Price’s mention of his The Exham Priory Cycle. Since it will include historic “precursor stories” to Lovecraft’s “The Rats in the Walls” as well as new stories influenced by the famous tale.

Chaosium is apparently getting back into everything from action figures to anthologies, and the latter seem likely to include Price’s long-languishing ‘Cycle’ anthology manuscripts. Including one with stories expanding on Lovecraft’s revision tales. Price didn’t say so, but I presume that Chaosium are flush with cash from the success of the big-budget videogame and its associated boost to the sales of the table-top game and related books.

Price’s next Crypt of Cthulhu magazine should ship in the next couple of weeks. Presumably that’ll be #112, but Necronomicon Press doesn’t have its table-of-contents up yet. Although a note elsewhere on the Web-o-sphere tells of one of the scholarly essays in it…

“First and Final Estimates: August Derleth Looks at Weird Tales Magazine” is to be included in Crypt of Cthulhu No. 112 (late 2018 or early 2019). This builds upon Haefele’s earlier discussion in August Derleth Redux: The Weird Tale 1930-1971 (H. Harksen Productions, 2009), emphasizing Derleth’s positive impact on the reputation of Weird Tales magazine.”

I recently spotted a rare lauding of Lovecraft, from Gunjan Patni, on a board for those studying the forms of language. He appears to be in India, and is thus presumably blissfully unaware that ‘you’re not supposed to say that’…

“I dabble in creative writing here and there. Wordsmiths like Tolkien and Lovecraft are a pleasure to read for their sheer skill in sentence structure and plethora of words.”

A while back I noted a 10,000-word survey of Lovecraft RPG publishing in 2018, which at that point was about to move on to a series of articles scrutinising individual titles.

Now there’s a final part, Cthulhu in 2018: A Retrospective, part 5. In the first section this looks at 2018 Kickstarter campaigns that have yet to ship, and then concludes with a general “Trends, Observations and Conclusions” section. The latter is a useful addition to the articles I linked to in my earlier post.

This looks rather good, if only for the Ian Bertram art. The collected six-issue run of “House of Penance”. Tells the…

true story of the Winchester haunted house and one woman’s mission to wash away the blood curse … With an added horror element right out of H.P. Lovecraft. Collects the six-issue miniseries.

Lovecraft fan by Sykadia (the expected format for posting on your DeviantArt profile).

H. P. Robocraft by Mutinate. The robot has an ink pen in his hand. 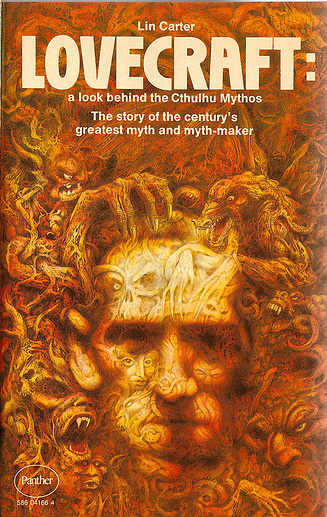 S. T. Joshi’s blog has updated. He’s warmed in, in Seattle. While here in the UK it’s bright sunshine, ten degrees and the very earliest breath of springtime wafts over the moist soil. Joshi’s blog brings news that Weird Fiction Review #9 is out with a Colin Nitta cover re-imagining the famous Fantastic Four debut cover…

Includes “an illustrated history of Gnome Press”, an essays on surrealist horror novels, and another on “H.R. Giger-inspired Alien toys”.

Why is my Tentaclii blog not indexed by the secondary search-engine DuckDuckGo? Apart from (oddly) two PDFs in the “Unknown Friends” series? It’s curious, because the content is there and Google Search is all over my blog. It even sometimes shows up on Google Scholar and Google Books.

Not that the absence from DuckDuckGo matters much, as all the evidence from my other blogs shows the only traffic source that matters in any real way is Google Search. But it is slightly annoying, especially when one sometimes hears people piously proclaiming that “I’m giving up Google”. They’ll do fine for basic “where is that big site’s main page” navigation searches. That’s what I use the Duck for, and the Duck’s Image Search is excellent. But for anything else, you’re using a third-rate service and badly crippling your online research capabilities.

Tentaclii‘s indexing problem here is not actually DuckDuckGo’s own indexing, but rather that their service is built mostly on Bing, with a bit of Yandex and a couple of others. Mostly they appear to rely on the world’s worst major search option… Microsoft Bing. Search for Tentaclii on Bing, and you can see how the results mimic almost exactly the search results for DuckDuckGo. So Bing is the culprit here.

Could I quickly submit my URL (web address)? No. Since September 2018 Bing no longer allows URL submissions to suggest new sites they should index. Nor does DuckDuckGo allow direct URL submissions. I did join Bing Webmaster programme to get a ‘site dashboard’, in order to submit URLs, which was total overkill and proved to be impossible anyway. After submitting your site you have to “verify” thus…

Which is totally impossible to do for a WordPress.com blog, because the author doesn’t have any control over such stuff. Thus basically Bing doesn’t allow WordPress.com blogs to submit their URL, in a way that their system can ever verify. Which means there’s no way to submit the URL for Tentaclii. Some might even see this as anti-competitive behaviour by Microsoft, blocking the services of other companies.

Like I said, it’s not that much bother… because Google Search is the only traffic source that matters. But it’s just annoying in a niggling way, especially when you hear people occasionally lauding Bing and DuckDuckGo as if they were as good or better than Google. I run JURN and have spent the last decade immersed in the academic side of search-indexing, and I can tell you they’re not.

An Account in Verse of the Marvellous Adventures of H. Lovecraft, Esq. Whilst Travelling on the W. & B. Branch N.Y. N.H. & H. R.R. in Jany. 1901 in one of those most modern devices, To wit: An Electric Train.