The new book of Lovecraft’s letters, Letters to E. Hoffmann Price and Richard F. Searight, is now showing up on Amazon UK. Albeit currently with the notice “Usually dispatched within 1 to 3 weeks”.

New to me, Kadath, or, The dream quest of Randolph Carter from Sloth Comics of London, 2014. Creator Charles Cutting is an illustrator from Oxford, in the UK. I like the style, and it’s probably even better on paper. There’s lots of it too, with over 100 pages of detailed art.

The first quarter of the adaptation was a webcomic originally on The Illustrated Ape website, then the first issue appeared in 2012 — but a crowd-funder for the rest of the issues is said to have failed. Congratulations to Cutting for getting the book finished and published regardless, especially in the context of the difficult UK scene. One review lamented that…

It certainly slipped under my radar, and yet Lovecraft + comics is on the radar for me. But then it’s always been a problem finding out about entertaining completed-story graphic novels for over-18 readers, unless they’re mass-market superhero fare or the sort of angsty politically-correct wrist-slashers that the reviewers flock to.

Anyway, get Kadath for £11.99 (about $17 U.S.) as a new paperback via Sloth (appears to be still in print, delivered by Amazon) and help support Charles with royalties. Or get it used on Amazon for (currently) a little less inc. postage.

New on Archive.org, a fine scan of Miracle Stories No. 1, Spring 1931. Very evocative art from the era, shown crisply and at large size. Including a full-page tentacles illustration that, with a little Photoshop-ing and colouring, might serve as a new book cover for someone.

This week, H.P. Lovecraft’s favourite non-magazine artist, Nicholas Roerich (1874-1947). As seen in The New York Times Magazine, 1st September 1929, as the article “Gods and Men in Storied India” (the northern Punjab). This is the only version online and is just about readable if you squint, but the rest of the article is not available.

From the same year, free as a PDF on Archive.org, his own book Altai-Himalaya: a travel diary, by Nicholas Roerich; with twenty reproductions from paintings, evoking and recording horseback journeys from 1924 to 1928 through the immense spaces and places of Asia, with the Altai Mountains being visited in 1926. This is the high bio-region where four nations now meet, China, Russia, Kazakhstan and Mongolia. It seen just before modernity and collectivisation, and the start of deforestation and the environmental damage wrought by socialism.

One wonders if Lovecraft read the book. But there is no Roerich book listed in Lovecraft’s Library. It seems like the sort of book that the budding ethnographer Barlow would have valued and taken away. Of course, it could also have been read from the Public Library. Roerich was then very famous, and there was no reason the Providence Public Library would not have stocked it.

If Lovecraft had picked up Roerich’s 1929 book a little late, in the early 1930s, and read as far as the 1926 “Altai” chapter then he would have been reading history. Wikipedia’s page on the Altai curiously skips the 1930s, but according to the reliable The Former Soviet Union’s Diverse Peoples: A Reference Sourcebook and other sources, under communism the Altai people were sent to small reserves in the south of the region, and by 1930 vast numbers of Slavs had been shipped in as part of a deliberate population-replacement strategy. In 1933 the Altai alphabet was banned, and the Altai religion was deemed an anti-Soviet conspiracy. The Altai who still remained outside the reserves were forced to settle and collectivise. During the war Stalin’s paranoia deemed them “pro-Japanese”. The post-war Soviet ‘Virgin Lands campaign’ brought gigantic collectivised farms to the region — 50 million acres of it went under the plough to grow the wheat needed to buy revolution and terror around the world. The Altai people were reduced to barely 20% of the population. Just a few years after his death in 1947, here and elsewhere in the high places of Asia, Roerich’s mid-1920s Shangri-la was gone.

Roerich’s 1920s ‘travel for painting’ diary book is fronted with a fine portrait of the man Lovecraft may have briefly talked with or seen on some of his many visits to Roerich’s New York City gallery. He would have been in his mid 50s by that time, then deemed ‘old’ by the male life-expectancy of the time.

…good old Nick Roerich, whose joint at Riverside Drive and 103rd Street is one of my shrines in the pest zone [New York City]” — Lovecraft letter to James F. Morton, March 1937.

Note that Roerich’s long expedition to Asia appears to have left New York City in March 1925, so after that date during the ‘New York City period’ Lovecraft would not have met or glimpsed Roerich in his Gallery. It’s quite possible the departure was covered by the cinema newsreels, though, and Lovecraft may have seen him on the screen.

Also new on Archive.org. “Nicholas Roerich and Science”, an article extracted from Art and Archaeology, May 1930. This presents an overview of the explorations and papers by Roerich that Lovecraft might have known by 1929, if only through personal discussion or press reports.

A new essay-book from Carlos Gomez Gurpegui of Seville, Spain, examining H.P. Lovecraft et le jeu video (H.P. Lovecraft and the video game). Available now from Ynnis Editions, and marked “2021”. It appears to be in Spanish. (Update: I’m told it can also be had in a French edition).

S.T. Joshi’s blog has updated with news of his 350th(!) book. He is currently working on his The Recognition of H. P. Lovecraft book and also the forthcoming Lovecraft Annual #15. Also news that “Ken Faig Jr.’s Lovecraftian People and Places” is due soon from Hippocampus.

Simple Translate for Chrome, Opera, and other Web browsers which support Chrome addons. Works on Google Books. Unlike other free addons, this one doesn’t make you jump through hoops or go to Google Translate. It also has a feature that ensures it doesn’t work in places such as search-engine input boxes. Made in Japan, and a mature and maintained bit of software development.

Select your target text, a small button shows up.

Click the button to instantly show the translation. Language is auto-detected.

While the translation box is displayed, you can also select and Ctrl + C to copy text from it if you wish.

To run on Google Books, as seen above, after install in Opera:

1. Access Options. Run on all sites. (This appears to be the default, but make sure it is).

2. Applications. Manage Extension. Turn on “Allow Access to Search Results”, to have it work on Google and Google Books and other search results. Opera requires this, and I assume others Web browsers do also.

3. In its own Settings page there are also switches to ensure it does not display its button in unwanted places such as search-engine input boxes, password input forms etc. This vital feature is missing in a couple of other similar addons.

Recent free and worthy readings on YouTube, by HorrorBabble:

“The Trap” by Whitehead and Lovecraft. 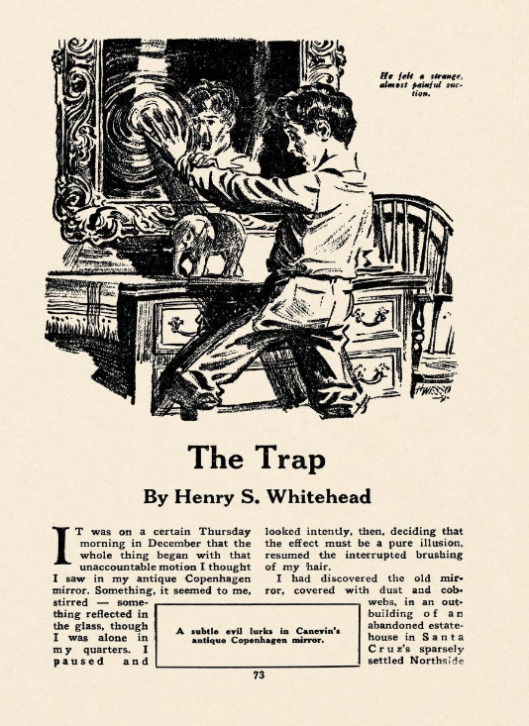 “Far Below” by Robert Barbour Johnson, well-regarded by those in search of 1930s Lovecraft-a-like pulp tales.

Alex CF’s Lovers one-off comic and handcrafted HPL figure both sold-out in an instant, long ago. But in case all trace of them vanishes from the Web, I’ll post some of the pictures here… 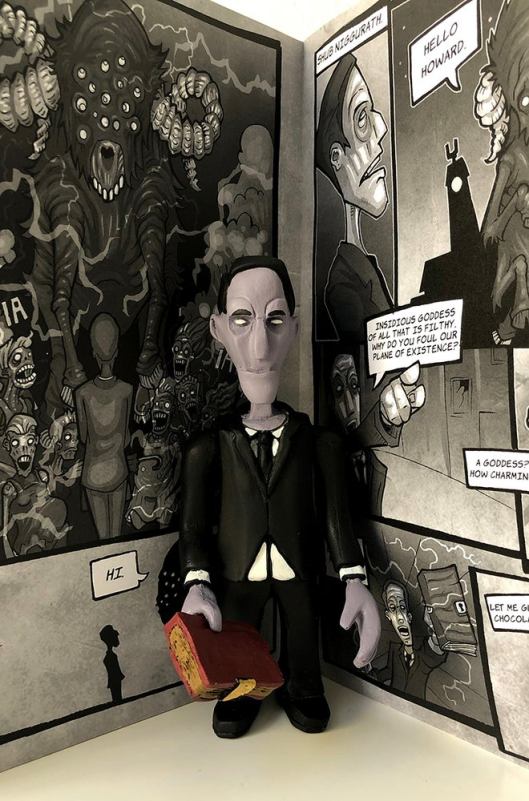 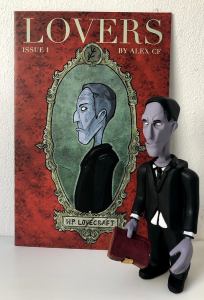 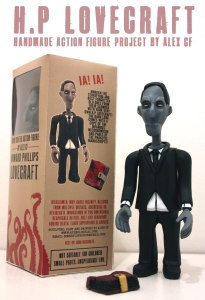 Alex does, however, have a nice line in pen & ink screenprints, Eldritch Lovecraftian Horror print series. 25 sets only, and some still remaining it seems.

New as an open 300Mb PDF at Archive.org, and currently with zero views, the Scarecrow Press Dictionary Of Mythology, Folklore And Symbols, Vols. 1-3. This is the pre-PC 1962 edition and Vol. 3 is the Index.

Hathi also has public scans of the first two volumes of the 1962 edition, though only in flipbook.

Of the Howard article the editor states…

If all you know about Conan comes from Arnold Schwarzenegger, you should definitely read Birzer’s piece. You’ll see how Howard’s nihilistic philosophy and experiences in early 1900s Texas influenced his ideas about: religion; sexuality; modernity; masculinity; big business; decadence.

In the same issue…

* “The Western Canon”, reviewing the Library of America’s new The Western: Four Classic Novels of the 1940s and 50s.

Does it matter that such fiction is finely typeset on bible-paper with sewn-in satin bookmarks and clasped in firm leathery boards? Rather than in warm-smelling woodpulp paperbacks, with garish six-gun covers and gummy discount-store stickers? The latest Journal of American Culture (March 2021) might seem to have an answer that question with the essay “From Pulps to Paperbacks: The Role of Medium in the Development of Sword-and-Sorcery Fiction”. This is currently online for free.

Sadly this essay does not turn out to be an elegant Guy Davenport-like consideration of the subtle psychological impacts of the actual mediums involved. I mean in terms of the madeleine-like tactility, the olfactory qualities, the surrounding-matter, the ads, the font and its size, the memory of the point-of-purchase and suchlike. That essay remains to be written. But the fannish reader who can make it beyond the introduction (“the genre reached full maturity in the works of Michael Moorcock”) is treated to a usefully brisk historical overview covering the role of editors, fans and publishers from the 1930s to the 1980s.

Without the 1930s U.S. summer heatwaves, as well as the wintertime 24-hour 87-degree steam-heat being pumped into 66 College St., would Lovecraft have lived even as long as he did?

The hotter it gets, the more energy I seem to have — mental and physical alike. I perspire freely, but am comfortable for all that. I can relish temperatures of 97° and 98°, and never want it cooler than 80°.” “I can’t steer my finger-muscles when it’s much under 70°.

It seems 1930 was a special shock to the nation because of its duration and because it was the first big leap up. 1931 was a repeat. 1932 and 1933 appear to have been modestly high but not brutal. Then a huge spike in 1934, followed by a more average 1935, then “Cthulhu is rising!”-scale brutal in 1936. But that is nationally. It would be interesting to compile a reliable and more precise “heatwaves where Lovecraft was” timeline.