Bobby Derie muses on the R.E. Howard — Clark Ashton Smith letters, nearly all of which have apparently been lost, and asks: what form did the correspondence take?

Artwork: detail from the cover illustration for Bobby Derie’s 2014 The Collected Letters of Robert E. Howard – Index and Addenda.

…came upon a black, gleaming specimen which certainly cannot be other than an eikon of Tsuthoggua! It was a semi-shapeless congeries of nighted curves —— squat & swollen, & with a curious suggestion of flabby viscosity despite the superficially petrific composition… [and it] left little room for doubt that it once stood in some curtained niche… of some such arcane delver as Athlophoros, who dwelt in the Street of the Alembics & vanished suddenly shortly before the desertion of the city…” — letter to C.A. Smith, 21st March 1932.

You cannot be freed from Rheumatism until you dispel the Uric acid. Athlophoros will dissolve it, and you will note immediate lessening of pain. Your entire system will feel better…” (Lima News newspaper, Ohio, 4th Sept 1903, representative of ads in other papers of the era).

Athlophoros Co. was involved in a “United States vs. the Athlophoros Company” legal case in California circa 1930, in which “five government witnesses, all physicians, [testified] regarding the inefficacy of the patent medicine Athlophoros”. No-one came forth from the East Coast to contest the case.

Lovecraft’s letter thus appears to assume that the California-based Smith will get the jokey allusion, both to the Athlophoros medicine and its “arcane delv[ings]”, and also to the way that Athlophoros had recently “vanished suddenly” from California’s chemist shops (indicated as “the Street of the Alembics”, an alembic being a small portable distillery vessel for medicines and chemicals) circa 1930/31.

Where did the name come from? In classical Greek times the phoros was the name of the money paid to Athens by the Greek City States, for the upkeep (i.e.: to ensure the victory-worthy status) of the Athenian military forces. In Roman times Athlophoros meant ‘victory/trophy-bearer’, specifically the winner of a chariot race (“Crowning the Athlophoros”, in E. A. Wallis Budge, The Decrees of Memphis and Canopus: Vol. II), and was used thus as a personal common-name by at least one priest of Alexandria. So presumably the patent medicine name tried to borrow a certan lustre from the heroic Roman usage.

Given the above advert one wonders if Lovecraft may have once used a wash of Athlophoros extract for his own face, since he suffered from thick ingrowing hairs that could not be shaved and thus had to be painfully delved for and plucked. S.T. Joshi has a passage on Lovecraft’s struggles with these “black, gleaming … semi-shapeless congeries of nighted curves”…

Harold W. Munro testifies that as early as his high school years Lovecraft was bothered by ingrown facial hairs; but when Munro speaks of “mean red cuts” on Lovecraft’s face he evidently believes these to have been the product of a dull razor. In fact, as Lovecraft attests, these cuts came from his using a needle and tweezers to pull out the ingrown hairs. This recurring ailment — which did not subside until Lovecraft was well into his thirties — may also have had a negative effect on his perception of his appearance. As late as February 1921, only a few months before his mother’s death, Lovecraft writes to his mother of a new suit that “made me appear as nearly respectable as my face permits.” (S.T. Joshi, I Am Providence)

The Monthly‘s Web navigation is not very intuitive: there are three pages to this article, though the links to the extra pages are easy to miss.

Brown Digital Repository : the Howard P. Lovecraft Collection. 30 documents scanned so far, including many complete letters to Bloch and others with Lovecraft’s sketches, envelopes etc. I noticed a typescript of “The Lurking Fear” as well. The server quality is very iffy at present, frequent time-outs and then the server totally died before I could get screenshots. I hope the Lovecraftian traffic hasn’t crashed it already… 🙂

The University of Iowa Special Collections & University Archives now has a Tumblr. Simply being able to use the world’s most unusable Web service is pretty awesome in my view, but it gets even more awesome — this particular Tumblr is dedicated to their ongoing work in digitising the vast James L. “Rusty” Hevelin Collection — vintage pulps, rare fanzines, fan convention materials and science fiction books. The collection is being unboxed, shelved and methodically scanned with library-quality scanners. It’s my understanding that professional practice means that the covers and tables-of-contents of each issue are first scanned, to serve as a sort of locational/visual index to the collection.

Paul Tremblay gets a look at some of the Lovecraft treasures of the John Hay Library at Brown University. Who knew that the Commonplace Book(s) were so dinkily cute?

Die Farbe (“The Color Out of Space”), apparently one of the best film adaptations of Lovecraft, has just been released on a limited edition Blu-Ray of 1,000 copies by BrinkVision.

“Critics have called this H.P. Lovecraft adaption one of the most faithful Lovecraft films ever made. It has screened at over 50 film festivals worldwide, winning awards and receiving praise from critics and Lovecraft fans alike.” 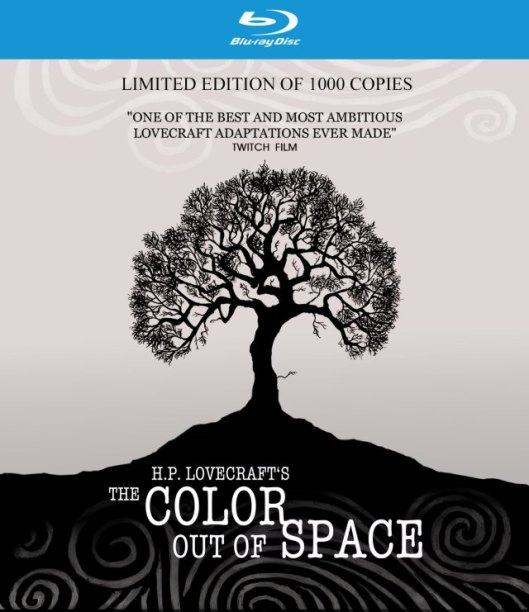 “Dean Lockwood on H.P. Lovecraft’s Sonic Horror” a 2012 podcast interview from Surrounded by Sound, in which he talks about his book Reverberations: The Philosophy, Aesthetics and Politics of Noise.

And possibly of interest to videogame developers, composers and environment designers is this 2012 technical conference paper…

Tom Alexander Garner and Mark A. Grimshaw’s “Climate of Fear: Considerations for Designing a Virtual Acoustic Ecology of Fear”.