While searching for an audio reading of de Camp’s 1938 non-fiction “Language for Time Travelers” (there doesn’t appear to be one), I discovered another Lovecraft-as-character story. In the 2005 collection Years in the Making: The Time-Travel Stories of L. Sprague de Camp, there is the story “Balsamo’s Mirror” (1976), which has Lovecraft as a very recognisable though un-named character.

In this 1930s tale an MIT university undergraduate named Willy and his friend Lovecraft wax lyrical about the virtues of the 18th century.

He [Lovecraft] wanted America to rejoin the British Empire; I was for splendid isolation. We argued history. He was devoted to the eighteenth century; I thought that men wearing wigs over good heads of hair looked silly.

They get lost in some dark back-alleys along Providence’s waterfront and thereby encounter the curious storefront of a Madame Nosi, mystic. The impoverished Lovecraft is reluctant to enter, but the affluent Willy offers to pay whatever her fee is. For a hefty $20 she offers a trip into what is claimed to be ‘the mirror of Nostradamus’, which apparently allowed the old seer to travel in time and actually see the future. The pair use it to visit the eighteenth-century, but unfortunately they find themselves in the form of humble rural yeomen (farm workers), rather than writers and wits in the London coffee-houses. Adventure ensues.

It’s not Nabakov, but it tells an amusing tale and must have been written interestingly close to the date of de Camp’s Lovecraft biography. It can be found in the Archive.org scan of Fantasy & Science Fiction magazine, June 1976.

As for his “Language for Time Travelers”, I’ve also discovered that Willy Ley produced a similar essay titled “Geography for Time-travellers”, just a year later. Apparently this takes a high level view, in terms of what the Earth would have looked like to space-visitors in orbit during past ages and aeons. C.M. Korbluth followed in similar vein with his essay “Time Travel and the Law”. All three essays can be found collected in good book form in the Martin Greenberg edited collection Coming Attractions (1957), which unfortunately is not on Archive.org. Though all the articles collected had first appeared in the pulps, and so the additional two can probably be found there with a little sleuthing.

Brian Kunde has a useful look at the science writing of the Lovecraft biographer L. Sprague de Camp, as part of a review of his The Heroic Age of American Invention. Others include…

The Story of Science in America.

The Great Monkey Trial (the trial that Lovecraft sometimes refers to).

Darwin and His Great Discovery.

Great Cities of the Ancient World.

The Evolution of Naval Weapons (for the U.S. government, as a course textbook).

He was working alongside Sagan and Asimov, in the popular science / debunking superstition field.

Earlier, in Astounding (July 1938), his non-fiction “Language for Time Travelers” surveyed the difficulties a time traveller would encounter with pronunciation, semantics and vowel shifts. Put together with his “non-fiction radio scripts for Voice of America”, if extant, could there be a public domain audiobook there for someone to tackle?

A large collection of science-fiction convention programmes have recently arrived on Archive.org. Among these is the Tricon 1966 (a Worldcon, Ohio) convention booklet. This features a cover by Kelly Freas depicting Lovecraft’s first full-length biographer L. Sprague de Camp.

And another inside, an ink drawing by Joseph Wehrle. 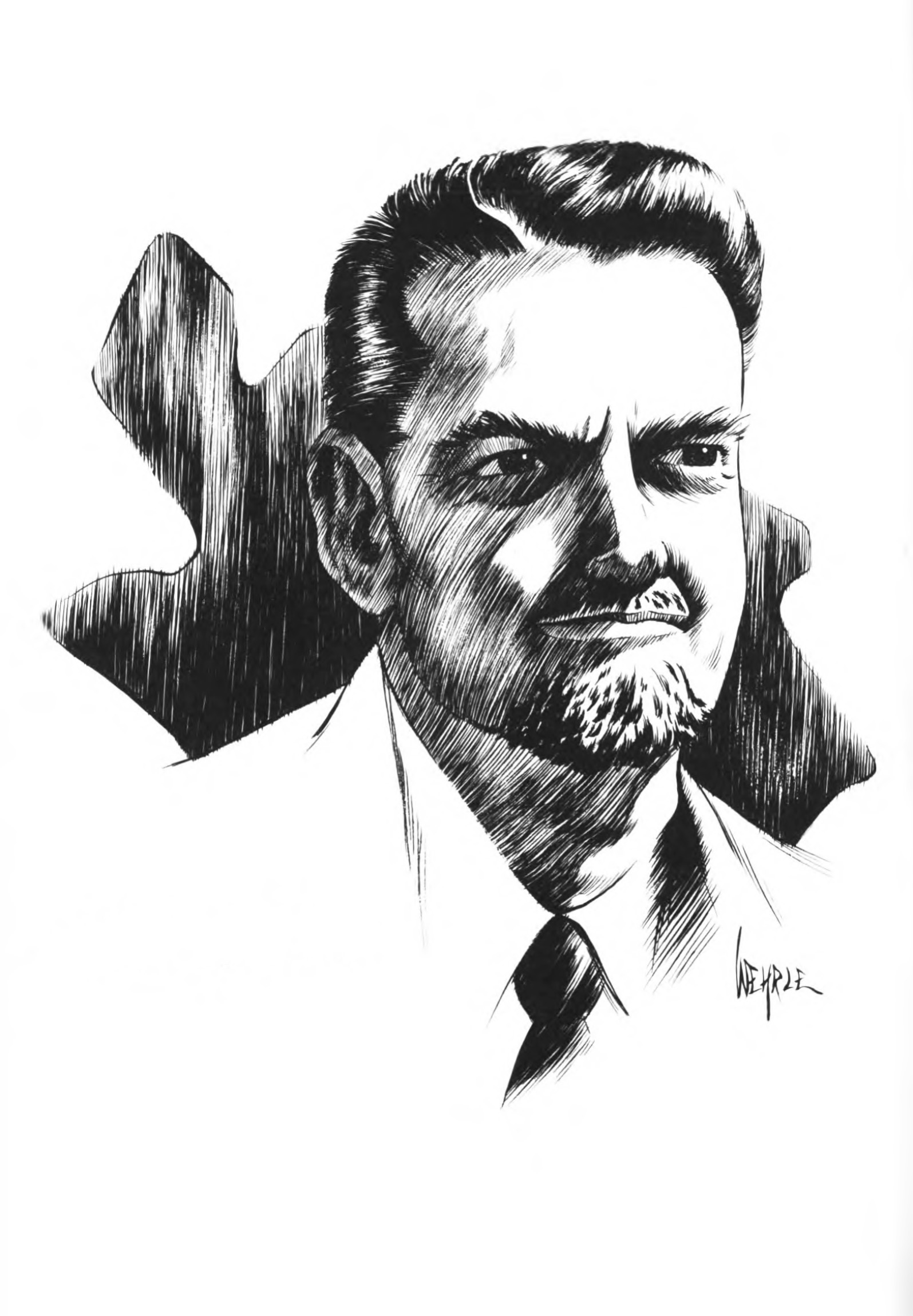 And Progress Report 1 has a good photo, which I’ve enhanced a bit. 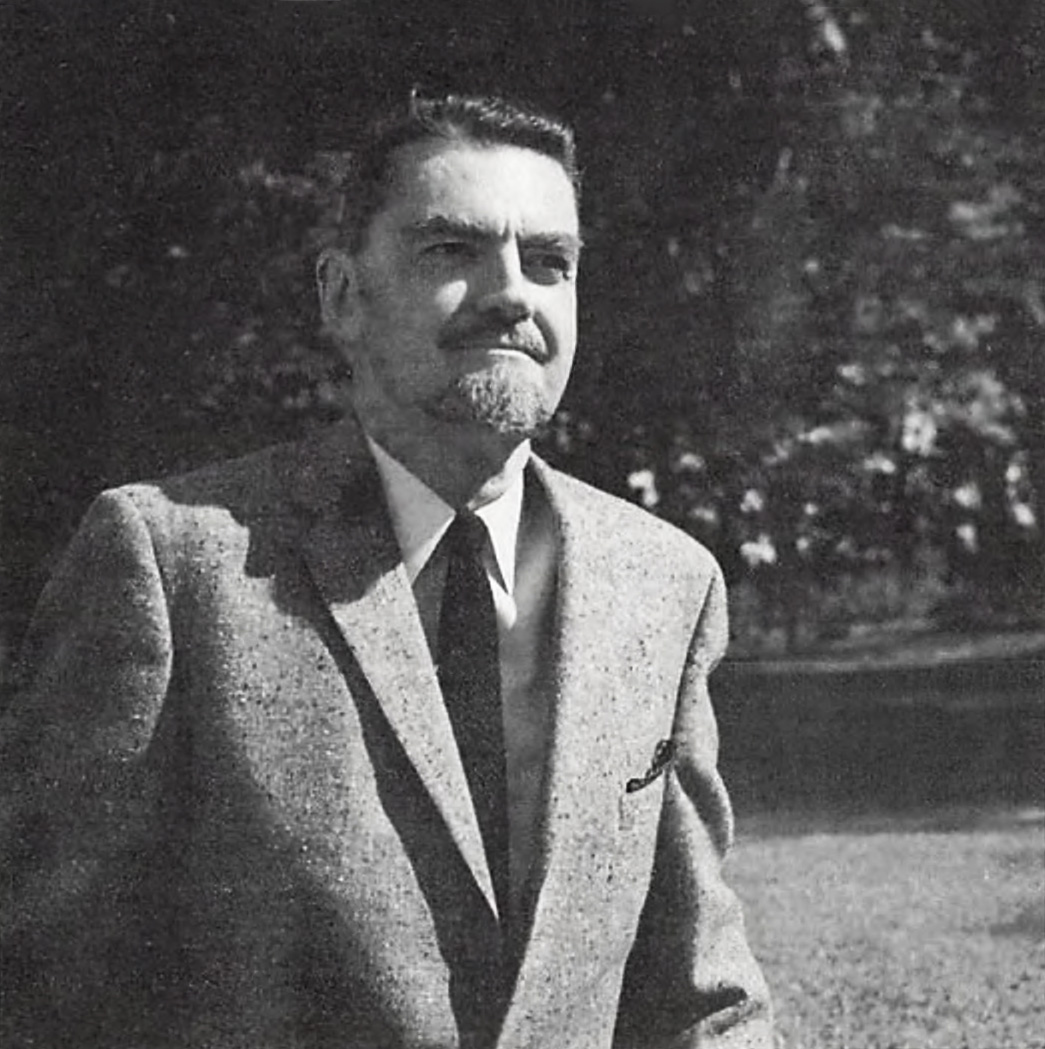 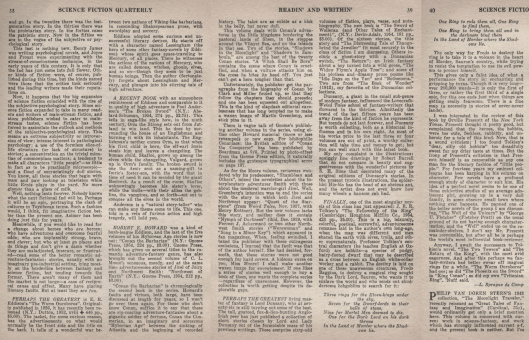 Worth reading right across the spread, as it’s ‘all of a piece’. For those who have somehow not yet enjoyed The Lord of the Rings, note that his review has plot spoilers for the first volume. At that time the second of the three volumes was not yet published.

Camp must surely have here been the first to draw the comparison between the modus operandi of the ring in the Conan novelette “The Phoenix on the Sword” (1932) and The Lord of the Rings. Had he had the other two volumes, he might also have compared other aspects of LoTR with the Conan novel The Hour of the Dragon. But at that time de Camp was set for a tantalising wait to read the third volume, The Return of the King, which appeared in 1956.

Another interesting bit of historical trivia is that de Camp remarks that “Conan the Conquerer has been published by Boardman” in the UK in 1954, and of course the first volume of The Lord of the Rings appeared in July 1954. I can’t discover exactly when in 1954 the British Conan book was published, but it was obviously a good year to be a young British fantasy reader — if one was savvy enough to avoid the juvenile disaster of confusing 1954’s The Lord of the Flies with The Lord of the Rings.

Less than a year later de Camp went on to note the second volume of The Lord of the Rings, The Two Towers, in the Science Fiction Quarterly for May 1956. Complete with what must have been a very annoying salvo of massive plot-spoilers for the unwary reader…

It appears that de Camp never similarly reviewed The Return of the King, and thus the entire epic. Which is curious. I can’t find even a brief mention of it from him, which one might have expected after all the build-up he’d given it. But according to The Lord of the Rings, 1954-2004: Scholarship in Honor of Richard E. Blackwelder (2006)…

A dastardly plot by the commies of the time, to suppress the book? Something like that happened to some extent and informally over the following decade, but no… it’s more likely that de Camp just quit reviewing for the magazine circa 1957. Because the magazine’s distributor went bust in 1957, and less copies on the news-stands meant that the magazine was only able to struggle on until February 1958. There were no more issues after that.

L. Sprague de Camp does, however, mention the final volume of LoTR in his book Literary Swordsmen and Sorcerers: the Makers of Heroic Fantasy (1976), where he has a chapter on Tolkien. By then the mood of the times had changed very radically, and 1976 was certainly not 1956. A version of the book’s chapter appeared in Fantastic: Sword & Sorcery and Fantasy Stories for November 1976 (Vol. 25, No. 5), under the title “White Wizard in Tweeds”. This wastes about half the article, first in a tedious defence against the ever-tedious Edmund Wilson (he hated Tolkien, as well as Lovecraft — for him The Lord of the Rings was “juvenile trash”). Then in explaining hobbits to the Fantastic reader who had somehow not heard of them by that time, and giving creaky plot-summaries of each volume. After some potted biography and a too-short account of his one-off meeting with Tolkien, he picks like an antsy fanboy at apparent logic-holes in LoTR. We don’t get any real sense of the “lascivious” passion that de Camp had evidently felt 20 years earlier, on first reading most of LoTR. Perhaps his 1976 article’s comment that “one can find flaws on re-reading” explains his lack of personal sentiment, in all but his obligatory-laudatory final line of the essay (“Few have equalled…” etc). Personally I find that The Lord of the Rings improves and deepens like a coastal shelf on re-reading, if one is paying close attention, but I get the feeling that in his old age de Camp kept getting hung up on what he perceived as niggling surface “flaws”.

From the Science Fiction Review in 1975, de Camp on what he left out of the Lovecraft biography…

This will already have been encountered by those interested in Lovecraft’s young manhood and his attempts to enlighten the local Irish youth. But I wasn’t aware of the information given on the initial sales volume for the biography, and this may interest those looking at the early history of the Lovecraft revival in the 1970s.