Ever wondered what Erich Zann’s music sounded like? Alexey Voytenko’s “The Music of Erich Zann” for violin solo (2009).

Some lucky bidder snagged this Lovecraft letter for $600. And the auctioneers kindly gave the world a nice clear scan, large enough to read.

The desert refered to is Dunsany’s… “There lie seven deserts beyond Bodrahahn, which is the city of the caravans end. None goeth beyond.”

Large scan of a large-scale USGS topographical map of Providence, 1935, courtesy of the University of Texas.

A Kickstarter to make the full version of the feature documentary Lovecraft: Fear of the Unknown available again. It’s gone out-of-print, and the discs sells for silly prices used due to…

the nearly 70 minutes of extra interviews only found on those old discs.

The Wyrd guys are sure to get funded, but I think they missed a trick in not offering an affordable $7 donation level — to get just the extra 70 minutes in audio .mp3 format. 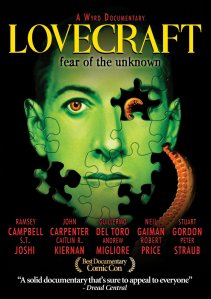 Edgar Allan Poe, Part-Time Cosmologist. He came up with…

a spookily intuitive description of the Big Bang theory more than 70 years before astrophysicists came up with the idea [and] “Eureka” [also] goes on to propose that all the scattered and blown-apart atoms of the universe are now rushing together again.

“Whispers in the Darkness” (2010) by Gato-Chico. Photoshop and stock. With some suitably refined typography and some cropping at the top and bottom, this would make someone a fine book cover.

Newly arrived on Amazon, the revised paperback of A Look Behind the Derleth Mythos: Origins of the Cthulhu Mythos

, for $17.99. Seems to be print-on-demand (CreateSpace), so is presumbly not going to go out-of-print. Although scholars may still prefer the first edition, since Don Herron writes of the second edition that he persuaded Haefele into…

So I suppose the first edition is still the one that scholars will want, errors and all, since at least it has the “needless crap” that means that all the quotes can actually be tracked back to a source page. Do any readers know if Haefele ever issued erratum pages for his first edition?

Some academic conferences already announced for 2015, of relevance to H.P. Lovecraft…

“the meaning and impact of Gothic spaces not only in aesthetic terms, but also the physical, psychological, and the cultural”

“the relationship between the monstrous and the geographic”

Very broad, seems to be open to anything on letters and correspondence circles.

* “The Once and Future Antiquity: Classical Traditions in Science Fiction and Fantasy” conference, Seattle, 27th-29th March 2015.

“What roles has classical antiquity played in visions of the future, the fantastic, the speculative, the might-have-been?”

“…the ways in which the [British] Edwardians understood and employed the idea of the enchanted, the haunted and the supernatural.”

Lovecraft Annual No. 8, 2014 looks about ready to ship, complete with a fab…

Pugmire Pink, [cover which] is dedicated to our steadfast friend W.H. Pugmire.

Franz Rottensteiner’s “Lovecraft as Philosopher” a dismissive review of S.T. Joshi’s The Decline of the West in Science Fiction Studies, March 1992. And Joshi’s lengthy demolition of the review in the November 1992 issue. Followed by slight whimpering noises from Rottensteiner.