a whirlwind tour through six of REH’s favorite poets

Moving the event to late April will provide everyone with a more inviting environment and make the outdoor activities more pleasant.

The temperatures in Texas in April are comfortable with low of 55°F and and high up to 73°F. You can expect about 3 to 8 days of rain.

Sounds super, I wish I could be there. Book early, as I’m guessing this change will cause others to think likewise and lead to a big jump in attendance. Also because the April weather will make it easier to get “big name” Guests, and more than one. The better weather might even entice a band or two of costumed re-enactors?

They also have the 2023 theme announced, “100 Years of Weird Tales”, celebrating the founding of the unique magazine in 1923.

The opening 20-minute paper in the Glenn Lord Symposium 2022, now online at YouTube, is an illuminating one covering the first phase of topics under discussion in the R.E. Howard / Lovecraft letters. Starts at 3:50 mins. More video recordings are appearing on the same channel.

Audio recordings from the 2022 Howard Days sessions are now being posted on the blog of The Cromcast: A Weird Fiction Podcast. Donations for future annual Howard Days events are always welcome, if you enjoy them. Eight so far, as posts:

* The REH Influence on Gaming.

* Late Night ‘In Conversation’ at the Pavilion, Cross Plains.

* Conan the Barbarian at 40. (Reminiscences of making the first two Conan movies).

* Rusty and Shelly Burke at the Cross Plains Public Library.

* What’s Up with REH? (Latest developments in Howard’s characters, in publishing and entertainment). Wrong media is linked on the post. The required audio is here. Some of the reveals: A “Red Nails” prequel novel by a top writer, The Blood of Serpent, as the first big ‘splash’ release in October 2022 to coincide with the 90th anniversary of Conan. Sounds good, as long as the action sounds like Howard. And a big sumptuous Conan artbook. Also a new monthly Titan Conan comic-book with top talent, to be released around the same back-to-uni time, now that Disney/Marvel has thrown the character overboard.

Beware the Creative Commons licences, which are muddled. On the blog posts the audio is all very usefully placed under full Creative Commons Attribution. However, the licence is regrettably different on the Archive.org mirror-copies, adding the show-stopper of “No Derivatives”.

Lots of ‘bathroom’ echo on the main speaker’s audio for “What’s Up with REH?”, so I used it as a test-file for the Izotope RX 7 AI-powered audio repair software — which for months now I have been meaning to get around to installing and testing. Specifically for its ‘Dialogue De-reverb’ module. Works fine. I applied this preset on the standard ‘General Reduction’ preset, and after 25 minutes of re-rendering the audio and three minutes of saving the file I had a much more listenable version. This version is now on Archive.org and, though it’s a ‘derivative’ I’ve assumed the blog’s original CC Attribution licence applies.

Tentaclii has gone a bit quiet on Robert E. Howard and Conan et al. It’s not because I’ve lost interested, but because the material isn’t there to note. There seems to have been a lack of suitable items recently, other than the new cash-in comics and foreign translations and suchlike so ably tracked by Messages from Crom.

But now the Robert E. Howard Days (aka Howard Days) in Cross Plains, Texas, are just over six weeks away. It may be that various scholarly and thoughtful publications are being timed to appear for that.

In the meantime I see that Exploring the Worlds of REH Omnibus collects Fred Blosser’s themed ebooks (Howard’s Weird Texas, etc) into a single paperback. Along with eight new articles. I see he also has the survey ebooks Sons of Ringo: The Great Spaghetti Western Heroes and More Sons of Ringo.

One item I thought might be of note was Conan the Barbarian Epic Collection: The Original Marvel Years – Queen of the Black Coast. This was a chunky Marvel 1970s Buscema/Thomas reprint volume released last Christmas. But be warned that the cover and title is misleading. On reading the details you find this is only the run-up to his meeting Belit the ‘Queen of the Black Coast’ (issues #43-59). Conan meets her in #58 and then #59-to-#100 or thereabouts is the rest of the Belit run, as ably collected in Dark Horse’s earlier reprint book Chronicles of Conan, Volumes 8-12. So, be warned that you’re not getting the run that the new ‘Original Marvel Years’ cover seems to promise.

I took a look to see if I had missed anything else in the last year or so, and noted “Der Barbar aus dem Norden: Nordenbilder in Robert E. Howards Conan-Erzahlungen”, in the journal NORDEUROPAforum, 2020. On ‘images of the ancient North as they appear in R.E. Howard’s Conan’. It may interest some readers here, especially because it’s under full Creative Commons Attribution and is thus available to be translated from the German.

Also there’s now a new and mighty-thewed blog-post category here at Tentaclii, REH. I’ve gone back and retrospectively tagged as many posts as I can find.

This first volume of ‘The Complete Stories’ is widely available for about £10 or less on various sites and that’s a bargain. For some reason, the next two volumes are rarer and much more expensive.

Also, over at The Silver Key a new review of the new Robert E. Howard Changed My Life.

Since I last looked, the Italian Lovecraftian scholars have released several new journals.

Zothique #9 appeared at the end of September 2021.

* “an article on “The Weird and Sword & Sorcery”, which highlights the ‘Celtic substratum’.”

* “a small but succulent special section dedicated to the theme of music in weird literature, introduced by an essay by Davide Arecco, researcher and professor of History of science and technology at the University of Genoa, and with rare or unpublished stories ( by L.A. Lewis, Clark Ashton Smith, Emil Petaja, A.W. Calder, Jessie Adelaide Middleton), poems (by Jo. Dart and Robert Chambers) and also a comic that, signed by the master Gino Carosini (author of the text and drawings) presents a meeting as strange as it is unexpected: the one between the tales of Lovecraft and the music of Chet Baker!”

Zothique #10 which apparently appeared a few weeks later as an “Autumn 2021” edition. This is the second Robert E. Howard special, of a planned three.

* “another substantial selection of articles and essays dedicated to the Bard of Cross Plains, together with a choice of unpublished works that expand the Italian bibliography of the writer.”

* “Andrea Gualchierotti with brilliant erudition speaks to us of magic and witchcraft in the cycle of Conan the Barbarian, finding surprising parallels with the real magicians of the classical world.”

* “Mariano D’Anza’s work on the sources of Howardian poetry continues, this being his fifth section.”

Studi Lovecraftiani #20 with the announcement post being dated 12th January 2022. 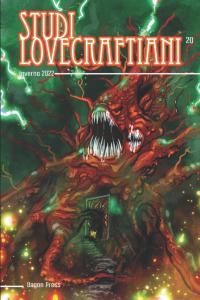 * “a piece on Lovecraft’s monsters seen as a psychological metaphor, the first part of a learned study on the abstraction of corporeality in HPL’s fiction”

* “an original article that discloses a source never before identified for the short story “The Nameless City”.”

* “three unpublished [in Italian] writings by HPL himself, starting with a memory of his school days, where the writer also tells a funny episode that occurred during the graduation ceremony; then one of his essays where he criticizes the famous poem “The Waste Land” by Thomas Eliot, and, translated here for the first time, there are also his extraordinary notes that he needed to write the famous short story “The Shadow over Innsmouth”.”

The Italian Horror Magazine also notes that #20 has…

* “”Lovecraft’s Call: A Few Considerations on the Cultural Heritage of the Providence Dreamer.” The last part of which talks… “about Lovecraft the philosopher and conservative, a man flanked by authors apparently very distant from him such as Cesare Pavese, William Butler Yeats, Yukio Mishima and Pierre Drieu La Rochelle, Ezra Pound and even the late-stage Pasolini.”

* “Lovecraft and the Bible, examining the influence of the King James Bible on Lovecraft’s tales.”

* “an interview with Richard Stanley, director of The Colour Out Of Space movie.”

Some books bits that don’t seem to justify a post on their own.

Two recent American novels feature not the vivid characters who were products of R.E. Howard’s imaginative pen, but fictionalized versions of the man himself. Teel James Glenn’s A Cowboy in Carpathia was published in 2020 by Pro Se Press. David Pinault’s Providence Blue appeared in 2021 from Ignatius Press.

hplovecraft.com now has the table-of-contents for the third book in The Robert H. Waugh Library of Lovecraftian Criticism. Looks tasty. The entire three-volume set will weigh in at 900 pages.

Taskerland reviews, as a Lovecraft newbie daunted by I Am Providence, the shorter H.P Lovecraft: A Short Biography. This being S.T. Joshi’s 100-page whistle-stop abridgement.

S.T. Joshi’s Miscellaneous Writings and his 1980s Journals have been published.

A new Robert E. Howard Foundation Newsletter (February 2022) including “Bran Mak Morn: A Play” – Typescript”. 1922/23, and published before in Bran Mak Morn: A Play & Others (1983, Robert M. Price as editor). Very difficult to find out more about it than that, though one source has it as a “fragment” rather than a complete play.

Amazon is now listing the Robert E. Howard Foundation’s The Collected Letters of Robert E. Howard, Volume 1 in the long-awaited paperback edition, with a publication date of 22nd January 2022.

Now seems to be shipping in both the UK and the USA. I recall that there was said to be a new cover for the paperback, different than the hardback’s cover. But that doesn’t now seem to be the case.

While you’re waiting for it to arrive you might peruse The World of Robert E. Howard. This website has scans of original letters to read online, and a call for “digital copies of any [original] letters” to show on the page.

New on Archive.org, The Diversifier #21 (July 1977). Has Emil Petaja’s “The Mist”, an old micro-story written “in the throes of sadness at the death of H.P. Lovecraft, and incorporating parts of the letters from Lovecraft to Petaja. Some memoirs of old times by Carl Jacobi, in which Lovecraft’s letters are barely mentioned while a trivial pipe-fire accident gets several paragraphs. The issue also has poems in memory of August Derleth and R.E. Howard.

At DMR Brian Murphy offers a useful new article “Things That Are Undone and Ought Not To Be: A Sword-and-Sorcery Studies Wish List”.

A good ‘Not Conan or R.E. Howard’ critical survey of the genre in pre-PC comics would certainly be welcome, ideally including British (Karl the Viking etc) and European titles (e.g. in editor Toutain’s Heavy-Metal-alike magazines). And a lavish coffee-table book of related pinball-table art, perhaps with a DVD slotted in the back with the playable pinball table ROMs on it.

* a survey-study of vintage paperback cover-art (as published) and its artists, though if the permissions could be obtained is perhaps doubtful now and one would have to rely on ‘fair use’ for covers;

* a close study of the curiously tepid cultural receptions and contexts of The Lord of the Rings in its ‘fallow period’ between publication and mass take-up. Say 1952-72, to add two years of run-up and take-off at either end;

* perhaps a study of the uses / re-workings sword-and-sorcery authors made of traditional works which were (by their time) effectively in the public domain (folklore, semi-fictional history, Arthur, Norse tales, Arabian Nights, the Northern fairy-tales, Ovid and ancient myth etc). They too had a ‘public domain’, though it was different than ours.