Well, it’s the end of September. I hope readers have enjoyed this blog’s renewed stream of postings. Just a reminder that my Patreon currently stands at $8 a month in total, and as such I’d welcome a few more patrons to give it a boost. As little as $1 a month, from just a few more patrons, would be very encouraging to me.

A new clean scan of Lovecraft’s “Homes and Shrines of Poe” article. Originally in The Californian for Winter 1934, but here scanned from the early Lovecraft fanzine The Acolyte for Fall 1943. So far as I’m aware, despite its public domain status, the essay is only otherwise available in Collected Essays, Volume 4: Travel and via a rather clunky tiling image-viewer format at the Iowa Digital Library.

The issue is not on Archive.org, as yet, but they have The Acolyte for Summer 1945 with “Interlude with Lovecraft” by Stuart M. Boland, outlining his now-lost correspondence with R.E. Howard and H.P. Lovecraft in the mid 1930s. I see that Bobby Derie expertly scrutinised both of Boland’s 1945 claims in 2017, in an excellent long blog post “A Lost Correspondence: Robert E. Howard and Stuart M. Boland”. I’ve now added his essay to my Open Lovecraft listing, since the latter part concerns Lovecraft.

The Acolyte for 1944 Summer has a reprint of Lovecraft’s “8th century” warrior poem, done as a translation into a slightly stiff (perhaps deliberately so?) Victorian-era English. Possibly that poem is only otherwise available in The Ancient Track?

Other issues of The Acolyte are online in viewer form at the Iowa Digital Library. These have: Lovecraft’s “Poetry and the Artistic Ideal”; his “Notes on Interplanetary Fiction”; “a “discarded draft” of “Innsmouth” (readable format) in an issue with a very fine cover (see below); and Hoffman Price’s memories of Lovecraft (appears to be the same as the text reprinted under a different title in the now rather expensive Lovecraft Remembered). 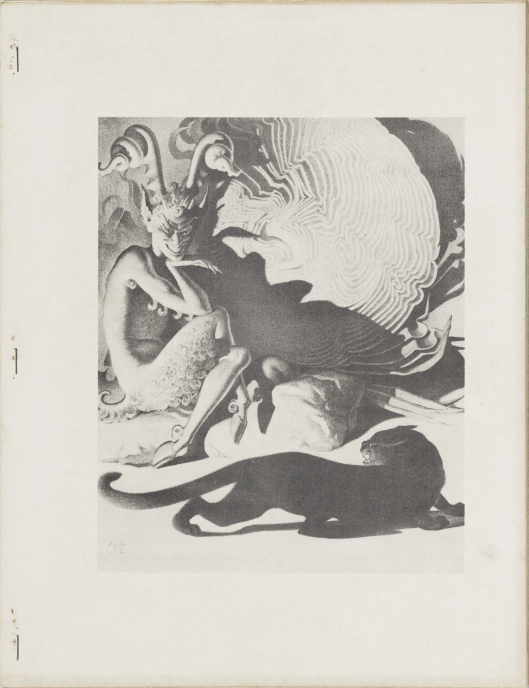 Cover of the Spring 1944 issue of The Acolyte. The picture is signed “Ava Lee”, but inside the issue’s art is credited to “R. A. Hoffman and Alva Rogers”. Other covers by Alva are clearly signed “Alva Rogers” and are done in a much less refined style. R. A. Hoffman was the fanzine’s art director. I can find no details online of an “Ava Lee”. He/she apparently also produced a cover for the first issue, but the only scanned copy of No. 1 is missing the cover illustration. The artist was possibly trained/worked as a stage designer for the theatre, judging by the picture? It also appears to have been cropped from a wider landscape format picture, to make it fit a front-cover. Which again suggests it was originally a theatre-design concept illustration.

Amazon has reportedly cancelled its vaguely-planned and probably politically-impossible Conan TV series, announced back in February 2018. Some sources claimed it would be “literary” and faithful to Howard, while other claimed a “wholly new story”, so there was obviously some confusion among the team from the start. Game of Thrones director Miguel Sapochnik would apparently have told the life-story of Conan, from being bewitched and lured into the frozen wilderness as a youth in “The Frost-Giant’s Daughter”, to becoming the brooding and battle-scarred King of Aquilonia. And now, Messages from Crom brings news of the cancellation of the series, seemingly before they’ve even cut the pilot episode.

Oh well, there are always the audiobooks. And radio always did have the best pictures.

Monstertalk meets The Lovecraft Geek (.MP3 link), a Halloween 2017 special of the Monstertalk podcast. Show-notes and links. The first 3 minutes is intro, if you want to save some time, and the middle section is just recalling and recounting bits of ‘Lovecraftian’ movies for about ten minutes. But the rest of it is excellent.

A fine lecture at the Museum of the History of Science, University of Oxford, by Brian Regal. The title is “Crackpots and Eggheads: Eccentricity in Natural History”. Specifically, the talk is on monsterphilia among the early natural historians and taxonomists, which then fed into the field of early scientific cryptozoology among mainstream scientists, and which then spiralled out into amateur cryptozoology and various fringe belief systems. Regal tells the story vividly, though the various personalities and places involved.

A new blog post from S. T. Joshi reveals the contents of his new book on recent weird fiction, 21st-Century Horror: Weird Fiction at the Turn of the Millennium. And thus his rankings of authors therein, as The Elite, The Worthies, and The Pretenders, which are to be seen on the Contents page. Also, by silent implication of being omitted entirely, ‘The Unmentionables’.

Joshi also mentions that the French magazine Nez is to run an hour-long interview with him… “about Lovecraft’s fascination with odours, stenches, and related topics.” However, I guess it’s possible they may translate it and run it in French.

Also, it’s good to hear that Joshi’s forthcoming “H. P. Lovecraft Cat Book” is to be “comprehensive”. So presumably an assemblage of all the mentions of cats, felines and felis etc in the letters, as well as in other materials.

The Brazilian journal Revista Abusoes had a bumper crop of H.P. Lovecraft scholarship in Portuguese, in a 2017 special issue. 15 essays and two interviews with translators of Lovecraft, all open access and public. I can’t read Portuguese but the Contents page looks good to me, via Google Translate.

Too many articles to list individually on Open Lovecraft, but I’ve added the whole issue.

John Coulthart today posted a bunch of his Lovecraft story illustrations as a blog post.

One of the illustrations for “The Colour Out of Space”. 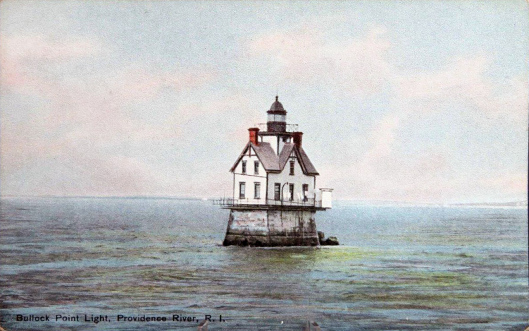 The curious light-house at Bullock Point, Providence. It’s across the river and about four miles south, so is not something Lovecraft would have encountered or glimpsed every day. And so far as I know he never took a steamer to New York (though he did see people off at the docks, such as Morton, who were going back to New York that way). But it’s the sort of place he might have glimpsed on his youthful bicycle and play expeditions over to that side of Providence, and would have later encountered pictorially on postcards such as this.

In a letter of 1921 Lovecraft recalls “our boyhood play-scenes — East Providence, Seekonk, and Rehoboth”. This was in the context of returning there in an unexpected car trip around his old haunts, on which he states that “I had not been there for eight or nine years”. This statement would place the last visit there circa 1912, perhaps about the time this postcard was made.

I should note that he also had his rooftop observatory until at least 1919, from which he could see far and in detail along the shoreline with the aid of his telescope. Letters sent to Galpin record him training his telescope not only on the stars, but also down and across the river during the day.

Lovecraftian role-players may also like this crisp scan of another local lighthouse postcard from circa the 1940s, to print up as a gaming prompt… 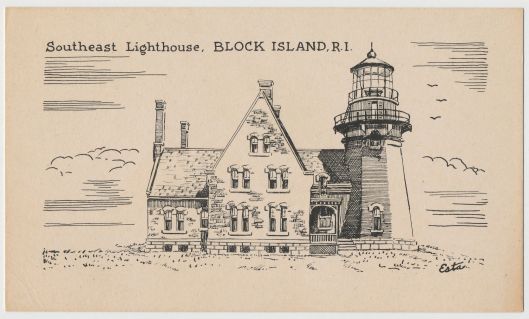 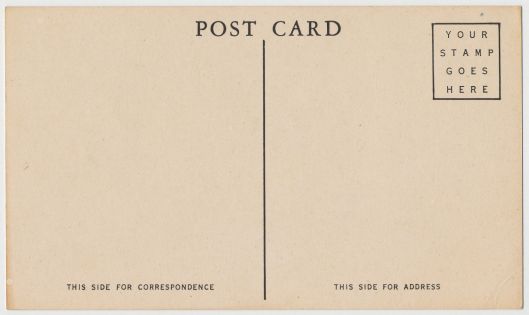 A new comics anthology of Lovecraft adaptations, Lovecraft: The Myth of Cthulhu, and it’s wholly new in English.

“Illustrated in haunting black and white by Esteban Maroto over 30 years ago, these comics are re-presented in a new edition, adapting three of H.P. Lovecraft’s most famous stories involving the Cthulhu Mythos: “The Nameless City”, “The Festival”, and “The Call of Cthulhu”.” 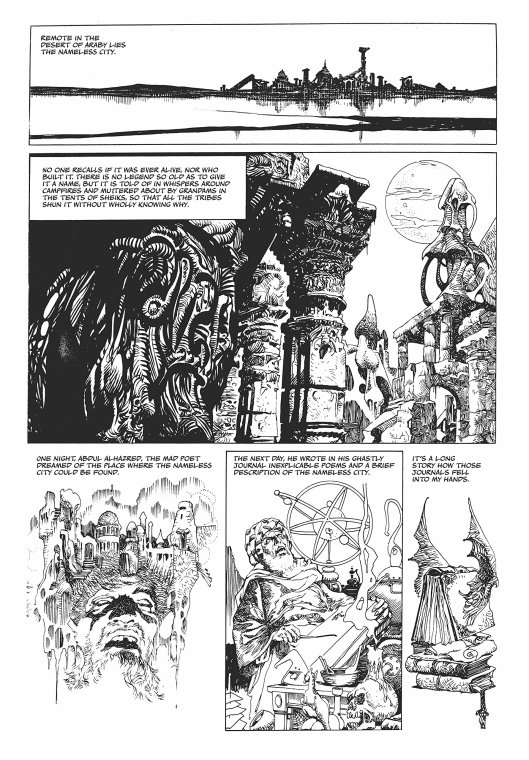 It if reminds you a bit of the best 1970s Eerie or the oversize b&w Marvel Comics, that may be because the same artist did Red Sonja with Roy Thomas and appeared as an artist in Eerie. Thought it seems that these strips didn’t appear there, and are new translations from the Spanish. They are said to have appeared in the back of the Spanish children’s comic Capitan Trueno, of all places, and then vanished. The artist never had his art back from the publisher, but he recently found good photostats and has now republished the strips in English.

I’m not keen on the cover, but I guess ‘Show The Monster On The Cover’ is what gets a few extra sales in today’s crowded comic-store marketplace. Currently the book is only available in paper, and runs to 80 pages. If this gets onto Kindle at £3.99, once the print-run sells out, it should sell very well there.