Time for a July round-up post. It’s been a slow month, and not because of summer heat. Which barely lasted two days for me, on one of which I didn’t even need the air-conditioner turned on. I’m not sure which was worse, the brief 95-degree heat or the hysteria. As a boy who lived through ten weeks of non-stop scorching summer in 1976, I was not impressed by the nation’s wimpy behaviour. Now Tentaclii Towers once again languishes in what has overall been a rather cool summer, only it’s now rather damper than previously. I can feel the early autumn approaching already, and it won’t be surprising if I soon start to spot strange fungi around the Towers.

This month in ‘Picture Postals’ I looked at Columbia Heights, and specifically the “faery” view of the city towers from 110 Columbia Heights which so enchanted Lovecraft when he first arrived in New York City. I found several pictures which should help other researchers to go on to discover 1920s views from more or less the same photogenic spot. It features the Brooklyn Bridge, so a good picture-researcher with access to U.S. and New York archives could probably get an impressive dusk view from 1922 and almost the same spot. Staying in New York City, another ‘Postals’ post identified the mysterious “Chatham” that Lovecraft fondly recalled as one of three “quaint familiar landmarks” of his 1922 visit to the city. So far as I know I’m the first Lovecraftian to identify this. I then found several fine and evocative period photos of the place. Moving back to Providence I also restored and showed a panorama view of Lovecraft’s cherished Prospect Terrace, a view that I’d never seen before.

I completed my mammoth re-read of all five volumes of the Selected Letters, this time making notes. My post “Notes on the Selected Letters of H.P. Lovecraft, Volume V.” appeared in July. Remarkable finds in this post: later in his life Lovecraft thought there was life on Mars; he did read The Black Cat as a youth (“I used to buy that reg’lar-like”); at the end of this life he finally saw a movie he really liked, A Midsummer Night’s Dream (1935); and I found a photo of the “well-known ‘bohemian’ restaurant called Julius’s” where Lovecraft once stayed for two weeks. It became known, after the war, as one of the most famous gay bars in history. I’m now reading and making notes on the 2021 Lovecraft Annual, which will become a review before the 2022 edition appears.

There were recordings from Howard Days 2022, and the Glenn Lord Symposium 2022, freely placed online in July. The latter had an especially illuminating discussion of the first phase of topics under discussion in the R.E. Howard / Lovecraft letters. I still can’t afford the HPL-Howard volumes of letters. They’re on the list, but several Ken Faig books and the Letters to E. Hoffmann Price and Richard F. Searight must come first.

Various useful reviews were noted and linked in blog and journals. The latest Spectral Realms poetry journal was listed on Hippocampus, and on inspection the contents list was found to include one non-fiction article on Barlow. The semi-annual Lovecraftian ‘zine The Blasphemous Tome released a new issue after a long gap.

In podcasts the new Voluminous (“Elizabeth and the New York Boys”) very usefully reminded me of emotional context for the writing of “The Shunned House”, and thus for my musing about the depiction of the final and otherwise rather incongruous “elbow” in the tale. This context confirms my earlier supposition that the glutinous “elbow” might well be read as a censorship-avoiding stand-in for some other less mentionable body part.

In open archival materials, I was kindly informed that HPL ‘zine (1972-74) is now free and public on Fanac.org, and I had a quick look through and pulled out or noted biographical materials for Tentaclii. I’ll have to get around to reading it more fully at some point, and I suspect that the Hoffmann Price item differs from that published elsewhere. Yes, it’s Price doing Lovecraft’s astrological chart, but the chart’s interpretation contains perceptive biographical insights on Lovecraft by one who knew him. New on Archive.org are Who’s Who in Horror and Fantasy Fiction (1978) and The Pulps: fifty years of American pop culture (1976).

The original Finlay art for the memorable dust-jacket of H.P. Lovecraft’s The Outsider (1939) came up for sale, and I snagged the preview scan.

In the comic and toon arts, Lovecraft’s The Dream-Quest of Unknown Kadath is now a current ongoing comic-book series, in the stores now as a #1. I’ve little idea what it’s like, but the covers and character-designs certainly intrigue. In royalty-free 3D I noted a “Patrick base mesh”, new on ArtStation and likely to be a very useful starting point for crafting a H.P. Lovecraft 3D toon figure. Also a new free very low-poly 3D figure for Poser, likely to interest noir / crime-pulp and Lovecraftian RPG artists and comics creators.

In the AI arts, I tinkered with a creative writing AI titled ‘Story Machines’, and as an experiment used it to expand a real H.P. Lovecraft dream paragraph. This became, via the AI, a new and much longer story fragment.

Nothing much in books this month, but in the musical arts S.T. Joshi released his Songs from Lovecraft and Others, as a book of sheet music with audio download-code.

Conventions started to become active again, with the RPG focused CarcosaCon 2023 booking and the Armitage Symposium once again arriving in Providence via NecronomiCon 2022. I suspect all such things will be smaller than before, partly due to reluctance to travel because of [insert: disease-of-the-week] and travel restrictions, and partly simply because most people can no longer afford to travel far.

For those interested in early British TV sci-fi (an acquired taste, I know) I also updated by Doctor Who view/watch list for the Tom Baker and Davison years, having now completed the viewings. The Davison stuff tails off badly, and apparently the several Doctors after that were dire. So very appropriately I’ve now gone back in time from Baker… and made a new list for the Hartnell (first Doctor) / Troughton / Pertwee years. Which I’ll view and updated with comments over the coming months. I was also pleased to find there’s a new 2022 second-edition of a complete viewer’s guide book to a rival TV channel’s ‘Doctor Who beater’ series, Jaunt: A Viewer’s Guide to The Tomorrow People, which suggests a follow-on British sci-fi series that I might also revisit.

The next Digital Art Live magazine is to be themed “Battle”, so please let me know ASAP if you’re an R.E. Howard artist or other artist who uses digital tools to make multi-character historical battle scenes. Ideally from a pre-gunpowder era, though I won’t say no to Solomon Kane in-battle art with flintlocks and the like.

That’s it for July 2022. Things will be even slower in August, as Tentaclii is now off the daily-posting schedule for a while. As always, please do seriously consider becoming my patron on Patreon or perhaps boosting your monthly patronage by another $ or two. Every dollar encourages, and I still have hopes of reaching $100 a month in total. Also welcome are simple PayPal donations, or just an inbound Web link to Tentaclii on your blog or a mention in your journal or podcast. You can also buy one of my various books.

I’ll be having a bit of a rest during August, starting now. Blog posts will still happen here sporadically, as and when juicy news pops up. For instance, there will likely be news of the release of the 2022 Lovecraft Annual contents-list, Lovecraft’s Birthday releases, NecronomiCon Providence reports, etc. But my daily posting schedule will be in abeyance until the end of August. Thanks for your patience. There are, of course, a great many back-posts to browse and read while you’re waiting for a new post. 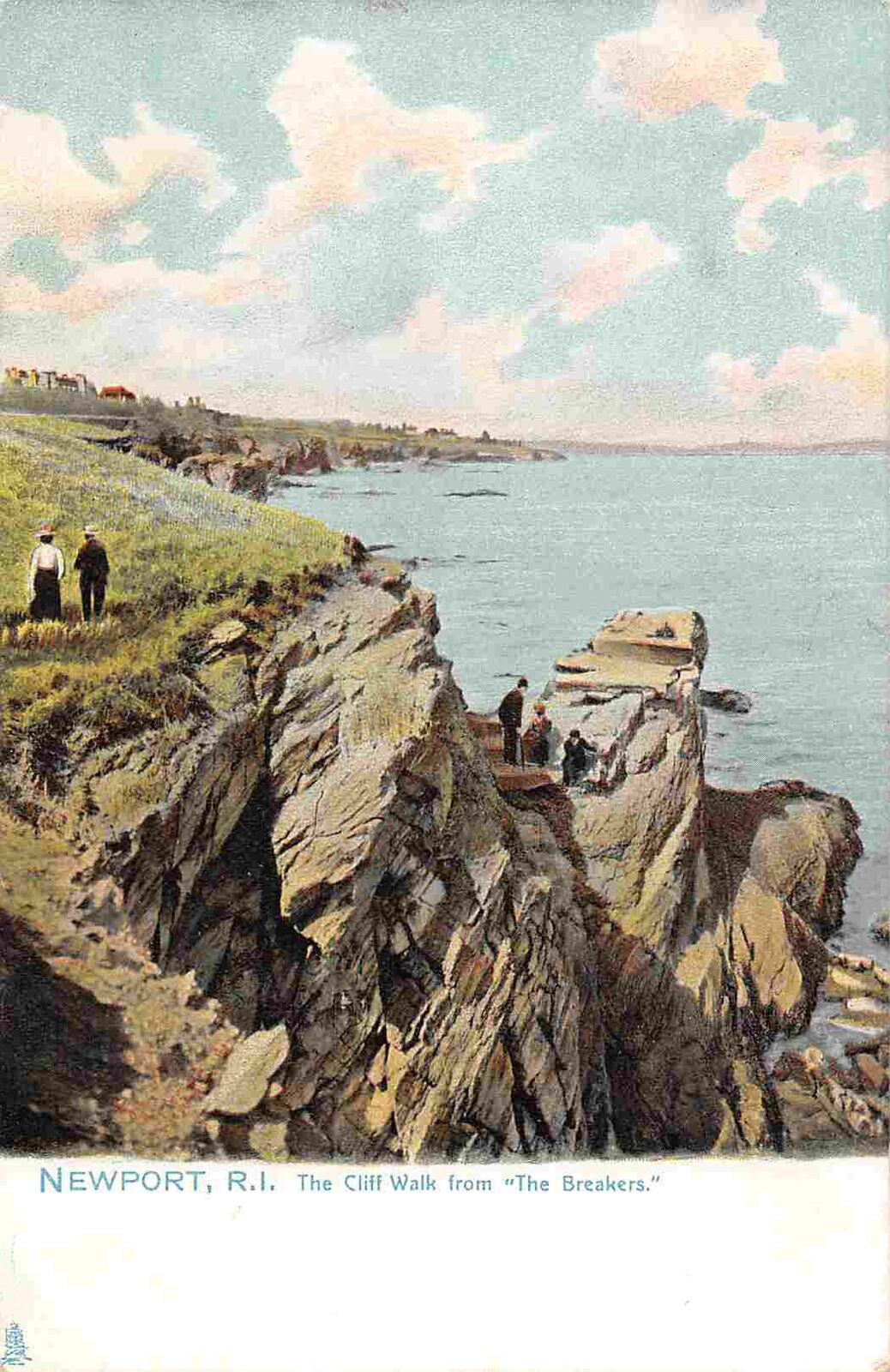 A nice retro ‘variant cover’ for Kadath #1, about to hit the bricks-and-mortar comics shops. 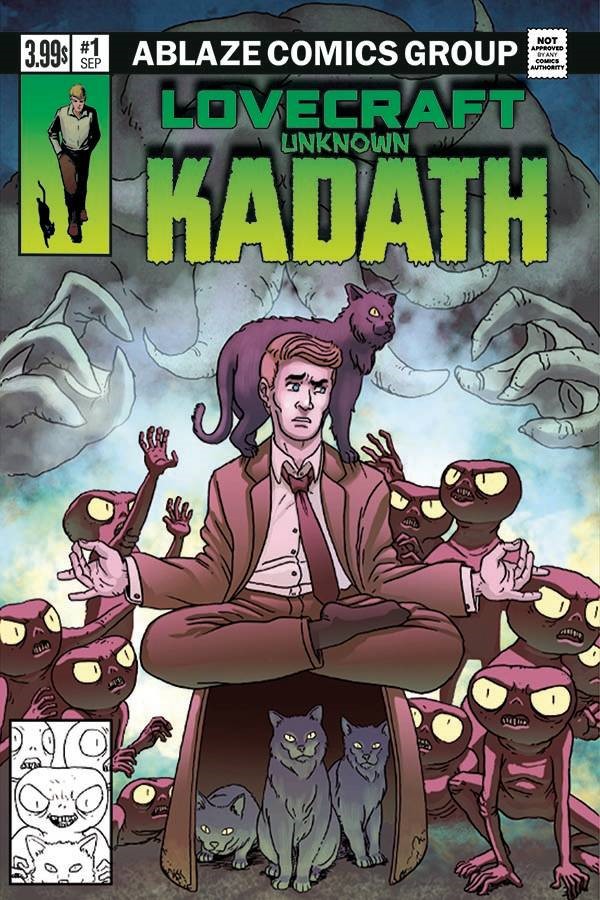 MarzAat has a new review of The Fortean Influence on Science Fiction: Charles Fort and the Evolution of the Genre (2020). He adds a list of titles and authors not covered by the book.

Incidentally I see that MarzAat maintains a linked list of “World War One in Fantastic Fiction”. Related in terms of the time period is a new Cultural Review essay on “Bolshevism and Anarchy”, which considers Lovecraft’s “The Street” in context.

Also, the latest Fafnir: Nordic Journal of Science Fiction and Fantasy Research has a new long review of Weird Talers: Essays on Robert E. Howard and Others (2019).

“Tentacles in Red Hook, Brooklyn”, a Photoshop tweak of an AI generated picture. Probably needs to be put into landscape format in Photoshop, and then each side painted in manually. Add foreground tramp freighters, etc. 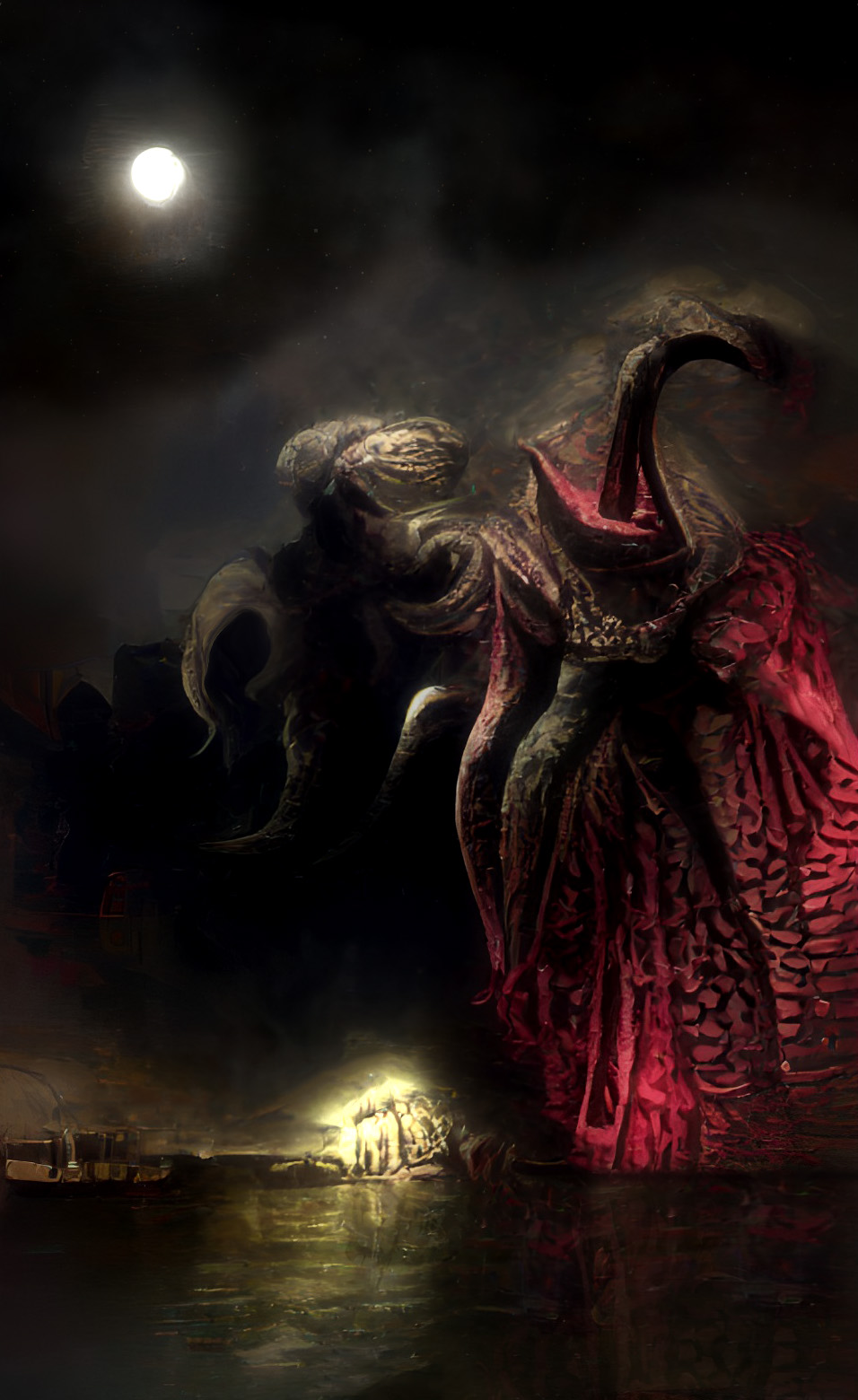 Creative Commons Attribution, if you want to have a go yourself. 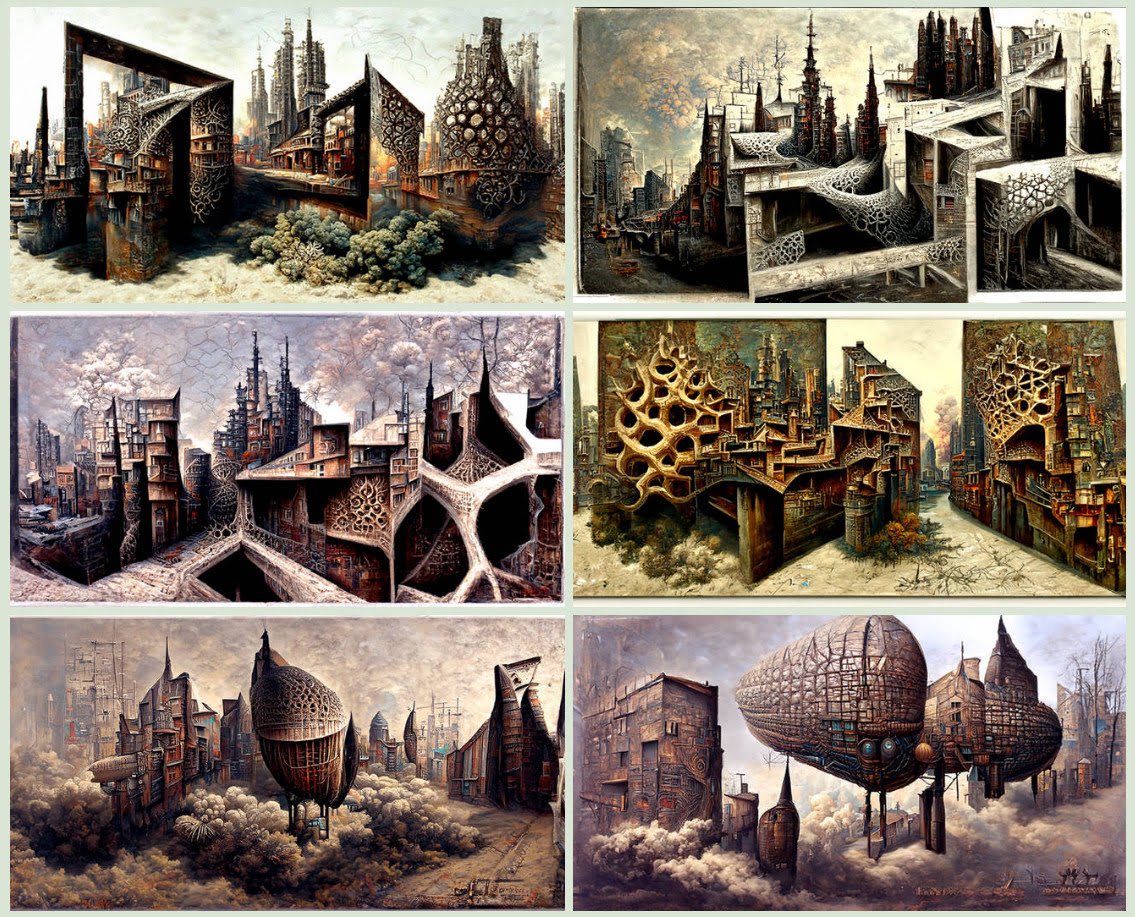 A new free very low-poly 3D figure, likely to interest noir / crime-pulp and Lovecraftian RPG artists. At under 3,000 polygons, suitable for populating scenes with ‘extra’ background figures. Head can be changed to different characters. Works with the Poser 11 software, which can now be had for just $52 at Renderosity. 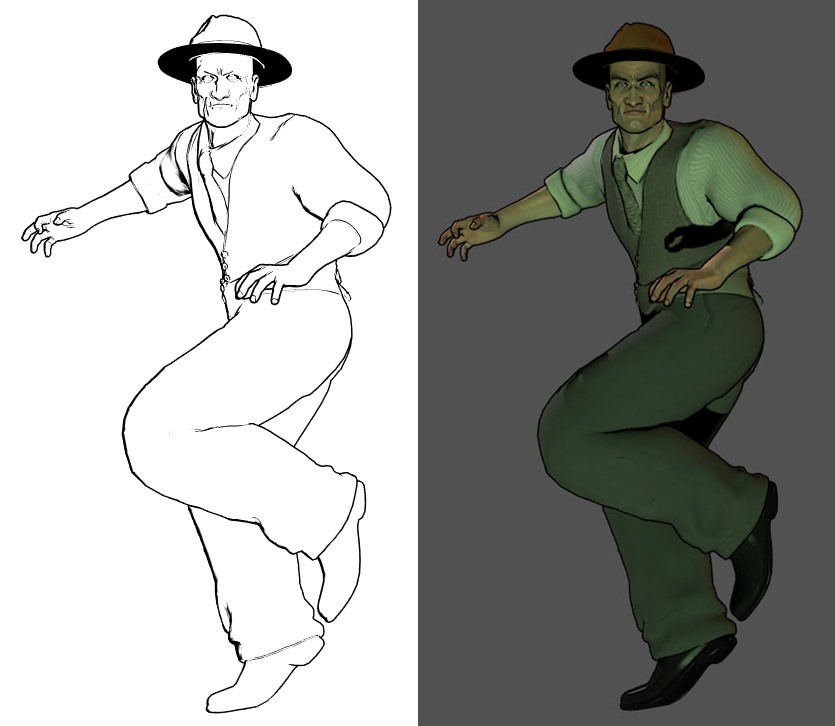 New on Archive.org and possibly of interest to some. Who’s Who in Horror and Fantasy Fiction (1978), which seems useful for getting biographies of authors who are now neglected or forgotten. And The Pulps : fifty years of American pop culture (1976). This latter appears from the contents-page to be a sampler rather than a history. 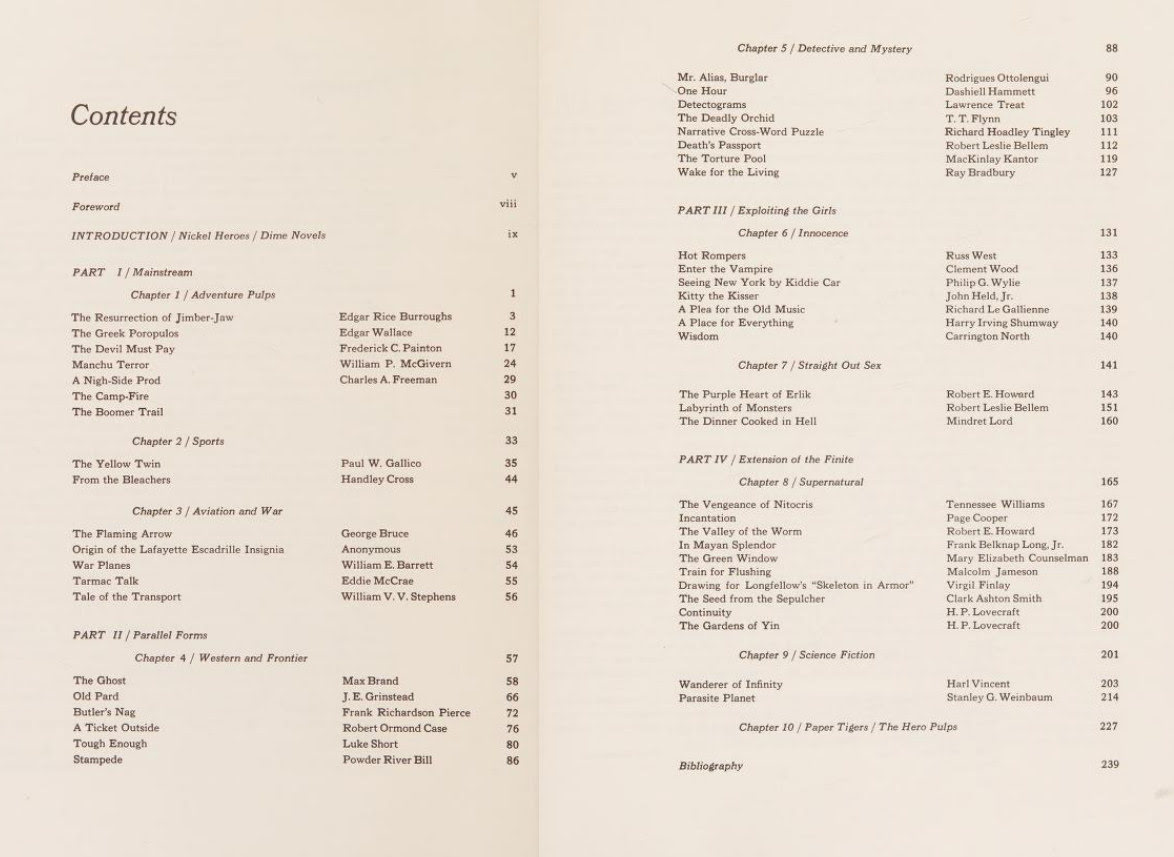 An update on this week’s ‘Picture Postals’. I now discover that Stupid Blog Software™ has re-sized the picture, and refuses not the scale down and re-name the original. So here is a .ZIP with the providence-prospect-1877.jpg at the full 4,500 x 1,800 pixels at 300 dpi.

That’s one nice benefit of having a rental server, being able to offer .ZIP files.

S.T. Joshi’s blog brings news of Jason C. Eckhardt’s first fiction collection. Well known as a Lovecraftian artist, here he offers what Joshi terms… “a modest but powerful array of weird fiction, ranging from Lovecraftian tales to sword-and-sorcery to ghost stories”. The tales can be had now for a modest price as a Kindle ebook.

This week, ‘Picture Postals’ celebrates NecronomiCon returning to Providence. With an 1877 view from Prospect Terrace, Providence. Later photographs suggest this was much as Lovecraft knew and loved it 20 years later circa 1897.

In Photoshop I’ve given the heavy colour-cast a thorough work-over, with a focus on restoring the sunset glow on one side. Also repaired various flaws, and shrunk it to a manageable 4,500 x 1,800 pixels at 300 dpi. Even so there’s lots of luscious detail to zoom in on. You may need to save it locally, to get the full zoom.

The starting point for my fix and re-colouring…

Creative Commons Attribution, for my new version of the picture. Use it how you like.

Update: Stupid Blog Software™ has re-sized the picture, and refuses not the scale down the original. Here is a .zip with the providence-prospect-1877.jpg.

Semi-annual Lovecraftian ‘zine The Blasphemous Tome has a new issue after a long gap. 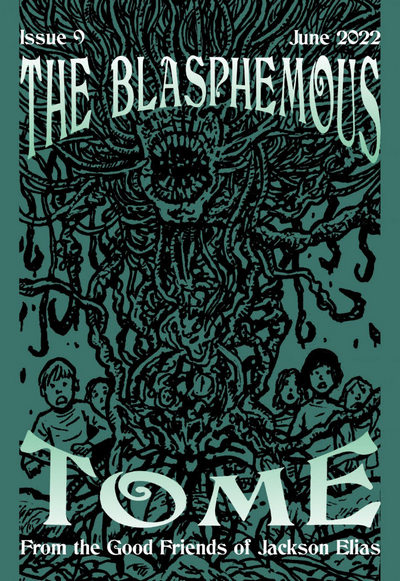 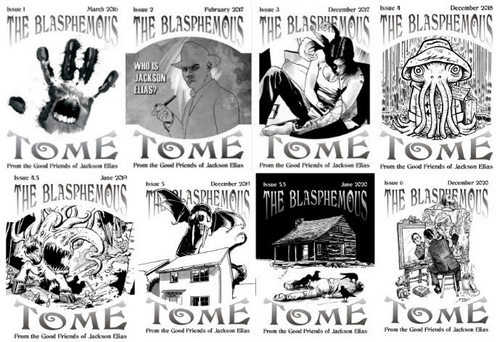 NecronomiCon Providence 2022 Tickets, for 18th-21st August 2022. Gold and Silver Key passes sold out, but with one month to go until the event the “general passes and single-day passes” are available.

Note also the bit that says… “Special event tickets will be on sale starting ~20 July.”