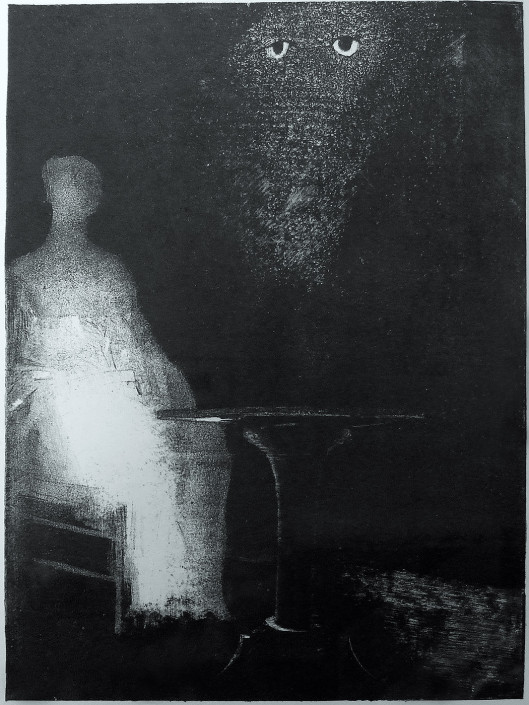 Odilon Redon, illustration for the book “The Haunted and The Haunters”, 1896 lithograph. (Click the picture for the large version). This picture is in the public domain due to its age, so feel free to use for fanzine covers etc.

A new academic paper, the lead article in the first issue of a new ejournal called Continent…

Mad Speculation and Absolute Inhumanism: Lovecraft, Ligotti, and the Weirding of Philosophy

The Lovecraftsman writes to tell me of a new (to me) Lovecraft discussion board, the H.P. Lovecraft & Cthulhu Mythos Forum. 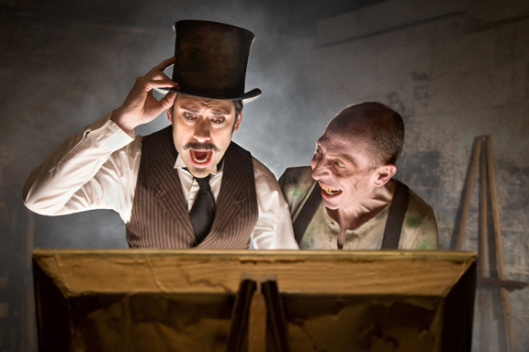 There’s a blog for everything. Even writers and cats. Lovecraft was, of course, inordinately fond of felines.

As with much in Lovecraft, it’s only hinted at rather than stated. In At The Mountains of Madness (be sure to read it in Joshi’s painstakingly corrected text) Danforth looks back, and his last glimpse is stated to be…

“upward at the seething, grotesquely clouded sky. It was then, just as I was trying to steer safely through the pass, that his mad shrieking…”

Later the narrator says of what made Danforth scream…

“It was not, he declares, anything connected with the cubes and caves … ; but a single fantastic, demoniac glimpse, among the churning zenith clouds, of what lay back of those other violet westward mountains which the Old Ones had shunned and feared”.

Presumably Danforth catches a glimpse of distant Kadath, although only readers familiar with the Lovecraft Mythos would realise this. Kadath is the place overseen by the ‘Other Gods’ (“they are great and mindless and terrible, and lurk in the outer voids”) and they apparently toy with the old gods of earth who have exiled themselves to the immense mountain (and possibly found themselves trapped there by the ‘Other Gods’?). This aspect of the Mythos obviously evolved over time, and Lovecraft left it rather tangled.

Lovecraft seems to suggest Kadath is not wholly ‘in’ our Earth, although it is deemed to be on an immense mountain in “the cold wastes”. It appears to be part of an other-dimensional space (‘Dreamland’ in the Randolph Carter tales) that intersects and opens into our world at a few rare points (such as the Rue d’Auseil in “Erich Zann”). It also appears to be a place from which the ‘Other Gods’ cannot currently reach any further into our earth, except via their emissary Nyarlathotep.

Earlier in At The Mountains of Madness, the narrator sees that the Elder Things have made a mural showing a giant mountain range, and hints this might be the location of Kadath. If Kadath was what Danforth saw, then possibly Danforth even glimpsed some manifestation of the herald of the ‘Other Gods’ that watch over Kadath, the “crawling chaos Nyarlathotep”?

Here’s the section pertaining to Kadath in Mountains…

“Certainly, we were in one of the strangest, weirdest, and most terrible of all the corners of earth’s globe. Of all existing lands, it was infinitely the most ancient. The conviction grew upon us that this hideous upland must indeed be the fabled nightmare plateau of Leng which even the mad author of the Necronomicon was reluctant to discuss. The great mountain chain was tremendously long […]

Yet even more monstrous exaggerations of nature seemed disturbingly close at hand. I have said that these peaks are higher than the Himalayas, but the sculptures forbid me to say that they are earth’s highest. That grim honor is beyond doubt reserved for something which half the sculptures hesitated to record at all, whilst others approached it with obvious repugnance and trepidation. It seems that there was one part of the ancient land – the first part that ever rose from the waters after the earth had flung off the moon and the Old Ones [Elder Things] had seeped down, from the stars – which had come to be shunned as vaguely and namelessly evil. […]

If the scale of the carvings was correct, these abhorred things must have been much over forty thousand feet high – radically vaster than even the shocking mountains of madness we had crossed. They extended, it appeared, from about Latitude 77°, E. Longitude 70° to Latitude 70°, E. Longitude 100° – less than three hundred miles away from the dead city, so that we would have spied their dreaded summits in the dim western distance had it not been for that vague, opalescent haze. Their northern end must likewise be visible from the long Antarctic circle coast line at Queen Mary Land.

Some of the Old Ones, in the decadent days, had made strange prayers to those mountains – but none ever went near them or dared to guess what lay beyond. No human eye had ever seen them, and as I studied the emotions conveyed in the carvings, I prayed that none ever might. There are protecting hills along the coast beyond them – Queen Mary and Kaiser Wilhelm Lands – and I thank Heaven no one has been able to land and climb those hills. I am not as sceptical about old tales and fears as I used to be, and I do not laugh now at the prehuman sculptor’s notion that lightning paused meaningfully now and then at each of the brooding crests, and that an unexplained glow shone from one of those terrible pinnacles all through the long polar night. There may be a very real and very monstrous meaning in the old Pnakotic whispers about Kadath in the Cold Waste. “

For those who prefer print books over ebooks, my Werewolves in Literature: an anthology of classic stories is now available as a 540-page 160,000-word printed book. This anthology contains 25 classic stories and tales from the 13th century through to the 1920s, in a uniform print edition using Abobe Caslon Pro as the font at 11pt. 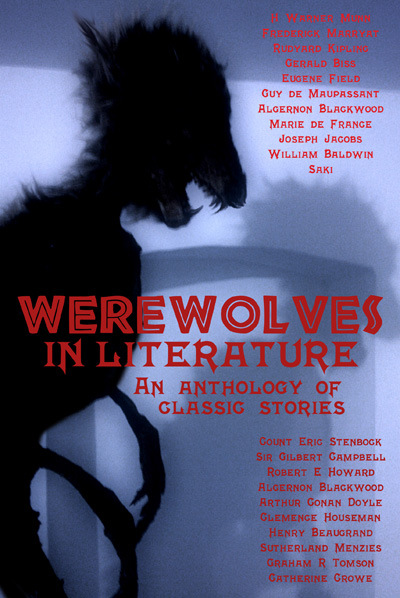 The anthology has previously been available as a two-volume ebook via the Amazon Kindle stores. For space reasons this new print edition has had to omit one long novelette, and the complete Dumas novel.

“after several months of working on the project when I could — snatching minutes and hours between work, grad school, and making Cthulhus — I am very proud to announce that I have finished an eBook of The Complete Works of H.P. Lovecraft.”

Kindle version available. These are the public domain version floating around the Web, not the corrected Joshi versions available in the three Penguin Classics editions. Still, it’s nice to have a free collected edition for the Kindle that’s had some thought put into it.