What do we have coming up in terms of cinema movies in 2020? In order of appearance through the year, my interest is tweaked by…

Underwater. Sci-fi underwater horror. Appears to be an Alien/Abyss re-tread, but it might be more inventive than that.

The Color out of Space. Major modern adaptation of the H.P. Lovecraft story.

Come Away. British fantasy drama apparently combining Alice in Wonderland with Peter Pan. Has a big-name British cast, although past experience suggests that’s not always a guarantee of success with such things. They can tend to be rather more ‘worthy’ than entertaining, and the child-actor casting can often go badly wrong (e.g. Nesbit’s Five Children and It in the 2004 movie version).

The Call of the Wild. Jack London’s doggy wilderness epic, seemingly done straight. A lot will depend on how convincing the CG is, as there’s going to be a heck of a lot of fur.

The Invisible Man. The title grabs me, but the movie turns out to be a “very loose” and modernised semi-adaptation ‘domestic abuse horror’ movie of the famous ‘early Wells’ science-fiction tale.

The New Mutants. Another and apparently the “final” X-Men franchise movie. It can’t be worse than the last, can it? But we may be surprised.

Antlers. A ‘scary deer’ horror? Another 2020 movie, Antebellum, is apparently a ‘scary butterflies’ horror. I’m sensing a trend here. I wonder if the Welsh Film Fund would be interested in my old screenplay Sheep: the blood-baaaath?

Artemis Fowl. Disney movie version of the books about a “12 year old master criminal” who does things like make supercomputers with stolen fairy technology. Apparently hugely popular among those born after 1990, and most likely to be appreciated by the under-14s and nostalgic 20-somethings. [Update: released, but apparently an utterly awful disaster]

Morbius, the Living Vampire. A movie outing for one of Marvel’s supernatural/superhero characters. Likely to be middling summer fare, akin to the first Ghost Rider movie. I’d guess it may feed into a bigger spring 2022 Doctor Strange movie, which is said to have a strong Lovecraftian slant?

The King’s Man. A Kingsman prequel movie. Looks like a very interesting start to the Autumn/Fall, and a welcome alternative to James Bond now that the November 2020 Bond appears to have gone the same way as Doctor Who.

The Witches. The Roald Dahl book, apparently given a “dark” adaptation for the “young adult” crowd — but the Guillermo del Toro screenplay promises quality for Halloween.

The Eternals. The first in Marvel’s hoped-for new mega-verse of movies, and based on the fondly-remembered space-gods comics series by Jack Kirby. It’ll be interesting to see how much they Kirby-ize the look of the movie, if at all, re: the possibility of blending film with the kind of toon-tech that brought us the recent Spider-Man: Into the Spider-Verse.

Dune. Another try at filming the famous science-fiction epic. Apparently this will only cover the first half of the first book, so presumably they anticipate a six or seven movie series if successful. Said to be visually ambitious in scale but twisting the story into politically-correct shapes. While you’re waiting, try the audiobooks.

The Croods 2. The first was a great bit of pure animated-comedy entertainment set in an amusing Stone Age, if rather forgettable after a few weeks. But I’d be up for more of that, provided they don’t pack it with eco-preaching.

Uncharted. A December movie and a spin-off from the videogame series, which features many ‘Lost City’ type settings in jungles and deserts. The December timing suggests quality. A lot will depend on how well they can mix machine-guns with mystery. I’d imagine that adding a slight Lovecraftian twist would suit the settings, and what are said to be ‘supernatural relics’, widening up the appeal of the movie version beyond the Indiana Jones crowd?

There’s no sign of the second ‘Young Tolkien’ bio-pic in the 2020 lists. Two were said to be filming, but only one has been released. There’s also no sign of the mooted adaptation of the early H.G. Wells horror The Island of Doctor Moreau.

* Y. Torhovets and M. Andronova, “Features of functional epithets in the stories of H.P. Lovecraft” (title translated), Studia Philologica, Vol. 1, December 2019. (Philological study in Ukranian. Examines and categorises Lovecraft’s use of “epithets used to appeal to sensory feelings” in the reader. Finds that his visual epithets predominate, compared to auditory and olfactory epithets).

“And are the science fiction stories H.P. Lovecraft ghosted for Harry Houdini not the best things he ever wrote?” — “Ghosting” (on ghost writing for others), London Review of Books, 6th March 2014.

A new-ish Italian book that had escaped my notice a year ago. Indagine oltre le tenebre : H.P. Lovecraft e le opere interattive appeared in November 2018. In 134 pages it appears (from the translated blurb) to be mostly a discussion of the videogame Eternal Darkness: Sanity’s Requiem (2002), highly thought of in gaming circles. Plus the cinema of John Carpenter. Also…

the volume avails itself of the direct contribution of Denis Dyack, author of Eternal Darkness, which comments on the various phases of the videogame telling its genesis and also includes the contribution of Christopher Vogler, screenwriter and professor at UCLA.

For the winter solstice and Christmas, a special look at Lovecraft’s College St. in the snow… 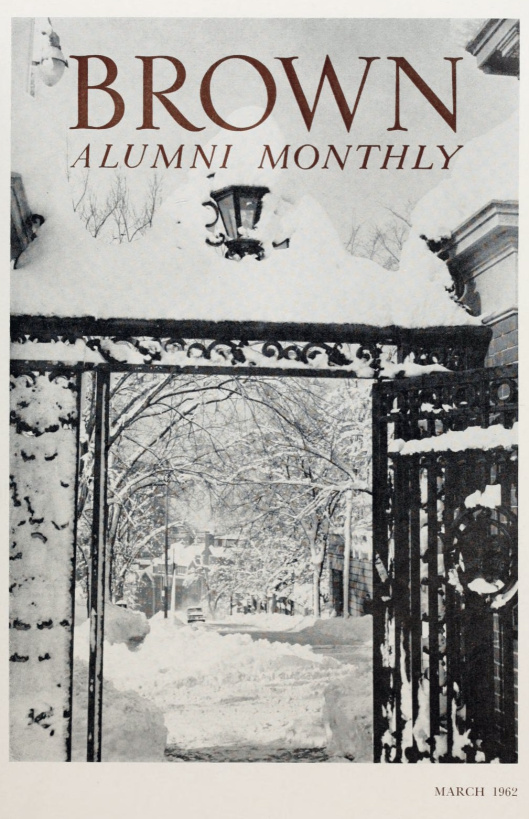 A cover of Brown Alumni Monthly, looking through the gates and down College St. in the late 1950s or early 1960s. On the right of the picture, at the corner of that tall white wall surrounding the John Hay Library, is the entrance to the unpaved lane that led to Lovecraft’s last home. 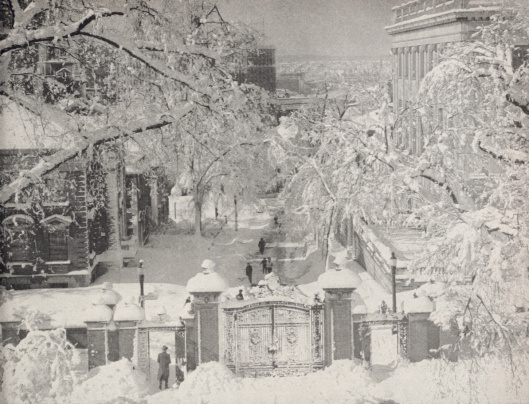 An elevated picture made by Prof. Bigelow from back of the same spot, this time looking down over the gates and along the top of College St. where boys are playing in the snow. A Lovecraft-alike man is seen passing through the gates. The John Hay Library is on the far right and Lovecraft’s home is behind it. 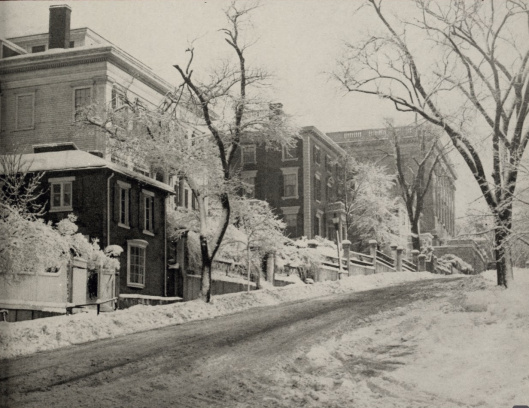 Looking up the street from the opposite direction and from about a third of the way down College St., looking up toward the Library and with the gates out-of-sight. Lovecraft’s lane entrance is seen on the right of the picture, the lane going away out of sight along the John Hay Library wall and thus leading to his garden courtyard and his home at No. 66.

In such heavy winter snowfall Lovecraft was inclined to stay indoors, though even in his later years he could be enticed out in such weather — if he felt socially obliged to go and could wrap up warm enough.

In the new Issue Zero podcast, comics writer Fred Kennedy (The Fourth Planet, due Jan 2020) makes “The Case for Conan The Barbarian” in comics. He gives a potted history of Conan and makes the case that he’s a…

In related news, comics veteran Roy Thomas will be the guest of honour at the Robert E. Howard Days in Texas in 2020. While the covers of the latest Marvel Conan book looks iffy (Conan is apparently now running around in the far-future, with a high-tech cyber-sword…) you can’t fault the old Savage Sword of Conan runs from Marvel.

Now released in the final public version, Librivox’s audiobook anthology Lovecraft’s Influences and Favorites. Not complete, and there appear to be a couple of “an early critic once suggested he could have been influenced by this…” items. But it looks like a good starting point, and it’s free.

As it’s Librivox one could add to this with one’s own additional readings, and other free readings, and thus build on it. While also weeding out the items with a shakier claim to influence.

S.T. Joshi reports in his latest blog post that the new Lovecraft Letters with Donald and Howard Wandrei and to Emil Petaja volume is now shipping. This being, in 554 pages, a…

revised version of Mysteries of Time and Spirit (2002), with the addition of the letters to and from Howard Wandrei and the letters to Emil Petaja (the manuscripts of which I recently helped the John Hay Library acquire).

In the pantomime spirit of the season, “HPL’l get-cha…” A unique ‘printable’ made for my Patreon Patrons, suitable for t-shirts etc. Find it as a 300dpi and 4,200-pixel .PNG file with transparent background, over at my Patreon posts.

Hollywood-watchers report that work is underway on adapting the Hans Rodionoff / Giffen / Breccia graphic novel Lovecraft (2003). The adaptation is mooted as a possible costume horror-drama which “will take place in the 1920s”. Sounds good, though the first sixth of the 130-page book is actually set in the 1890s with Lovecraft as a boy, which would entail two sets of period costumes. But I guess the zillion TV-series now being made have produced a thriving behind-the-scenes trade in costumes-and-props, and that a Lovecraft adaptation could be cost-effectively costumed with cast-offs from the likes of Babylon Berlin and Penny Dreadful.

The Lovecraft graphic novel then goes on to feature the adult Lovecraft as the central character. It’s very much a “his monsters and cultists are real” gory fantasy-horror rather any kind of straight bio-book. “Real” in the sense that, for example, in one scene Lovecraft brains a hostile cultist to death with his typewriter. It’s a book that has many good moments in the first half, but in the end the art outshines the baggy story — and it doesn’t help that the dialogue often seems stilted or clunkily expository.

However, the TV writers have previously worked on something called Game of Thrones and thus have landed a “multi-year deal with Netflix”. So they obviously have the talent to hammer out the flaws in the book. My guess would be that, if not a movie, Lovecraft could become a five-part mini-series destined for late-night screening in the run-up to Halloween 2021? There’s no politics in the book, though doubtless there will have to be all sorts of politically-correct changes and slantings made before it can be allowed to reach the screen. Still, if the project can negotiate the inevitable leftist whining without being ruined, then I have a hunch it might even be the first substantial big-budget TV depiction of Lovecraft-as-character?

It’s Friday the 13th so… a post on science and cats. Because, what could possibly go wrong with such a combination?

The book Falling Felines and Fundamental Physics is finally published, from Yale University Press. A history of the cat’s role in scientific revelation. Specifically the study of “cat-turning, the cat flip, and the cat twist”, as cats fall to land on their feet.