October departs, and the rain-glittered pinnacle of Tentaclii Towers stands stark and black against a moonless sky. Strange little tappings may be heard within, but lesser than of late. Yes, it was a lightweight month here on the blog. Daily postings continued here, but I am unlikely to maintain that over the winter. There may be soon days here when there are no posts, since I have several books for which the writing needs to be finished. I also have a large amount of reading to catch up with. First up are the two Lovecraft Annual journals which arrived recently, and in which I’ve only read the book reviews so far. Expect reviews of those on Tentaclii, when you see them. My thanks for my Patreon patrons for helping fund the purchase of the Annuals. I see that the Patreon total is still at $58 U.S. a month, though. I’m aiming for $100 a month, so please make generous Lovecraftians and others aware of the blog and my need for my Patreon to grow. Thanks.

My blog’s “Postcards from Lovecraft” feature continued my occasional interest in Lovecraft’s various waterfronts: Lovecraft’s post-New York riverside cafes in Providence; my “Outward Bound” post which looked briefly but poetically at Lovecraft’s evocation of his own city’s harbour; and rather less poetically a post on the Fulton St. fish-market in New York City which was found to be amply illustrated with postcards and pictures. A more sedate but, it turned out, equally watery location included the park bandstand at Roger William Park — which was on a sort of pier that splayed out above the lake. One imagines problems with the midges rising from the depths on warm summer nights, but in those days they made liberal use of insecticide.

My blog’s weekly “Kittee Tuesday” feature also once veered in the direction of historical context, with “The Office Cat at the Brown Daily Herald”. This shed light on an editorial office tradition which appears to have been formative in Lovecraft’s youth, and thus of his own preference for ‘a kittie in the study’. Incidentally, this month I read elsewhere of a tradition among the Edwardian youth of pretending to be far older than they were (a sort of “young fogies” thing, but way back in the 1900s) and I wondered if that similarly fed into Lovecraft’s sense of himself as ‘an old gent’. Was his pose actually once part of a wider youth movement, to which he later clung — as he did to so many other passed-away things?

Sadly I feel I will have to scale back on these “Kittee” and “Postcards” blog features until next Spring. As I said above, I have several books that need to be finished. The “Kittee” posts often take much searching, and the “Postcard” posts do have a tendency to ramify if I let them, in terms of needing wider and wider historical investigations once one starts looking at a topic or a locale. Expect these posts when you see them, and there may well be weeks when they’ll be absent.

In non-fiction journals, I noted that the Blood ‘n’ Thunder journal has re-started, with a focus on scholarly fan-essays on “adventure, mystery and melodrama” in the pulps. The Italian Lovecraftian Dimensione Cosmica journal has also returned, and I translated the relevant contents pages to English.

In books, Io Sono Providence: la biografia di H.P. Lovecraft, the Italian translation of S.T. Joshi’s monumental biography, should be in the mail as I type; all three Lovecraftian Proceedings were noted as being available in very affordable Kindle ebooks; and forthcoming is a new wide-ranging Religion and Comics series from Claremont Press. In terms of collectables, a big Derleth collection popped up at L.W. Currey and was linked.

In audio, Lovecraftian multimedia sonics from Germany; the Lovecraft Geek Podcast made a welcome return with a fine and focused new episode; and a new audiobook of the HPL-fave The House on the Borderland appeared on Librivox.

Various creative endeavours and bits of art were noted. In comics I was pleased to learn that Marvel’s b&w 1970s and 80s Savage Sword of Conan is being properly reprinted as handsome volumes; and I was equally pleased to see as a follow-on that Howard Days 2020 will be “Celebrating REH in Comics”.

A clutch of academic calls and opportunities were noted, including a funded-PhD in Music and Multimedia Composition at Brown University; and the annual Joshi Endowed Research Fellowship 2020. I produced an annotated “The City” (1919) to mark the 100th anniversary of H. P. Lovecraft’s cosmic mythos in November 2019.

The annotated “The City” (1919), a poem by ‘Ward Phillips’ (H.P. Lovecraft). With an introduction and annotations by myself.

This 10,000-word PDF has been produced and published here to mark the 100th anniversary of H. P. Lovecraft’s cosmic mythos in November 2019.

It was 100 years ago that H.P. Lovecraft’s ‘Cthulhu Mythos’ first emerged onto the printed page, in the form of the seminal “Dagon”. This tale was published in the November 1919 issue of Paul Cook’s humble amateur publication The Vagrant. 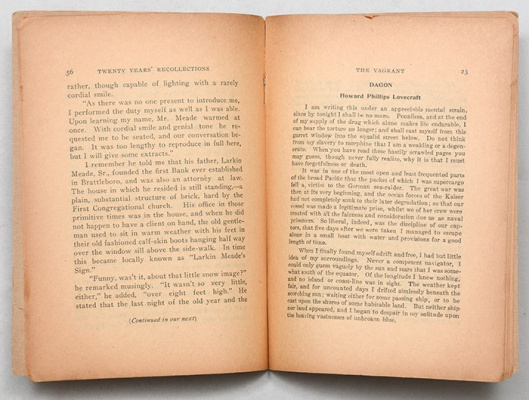 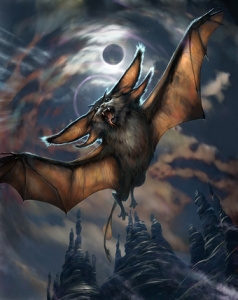 “Tentacular Inspector”. My last-minute inky thing for Inktober, in lieu of actually participating. I guess it could count as the final 31st October prompt: “Ripe”. Creative Commons Attribution. 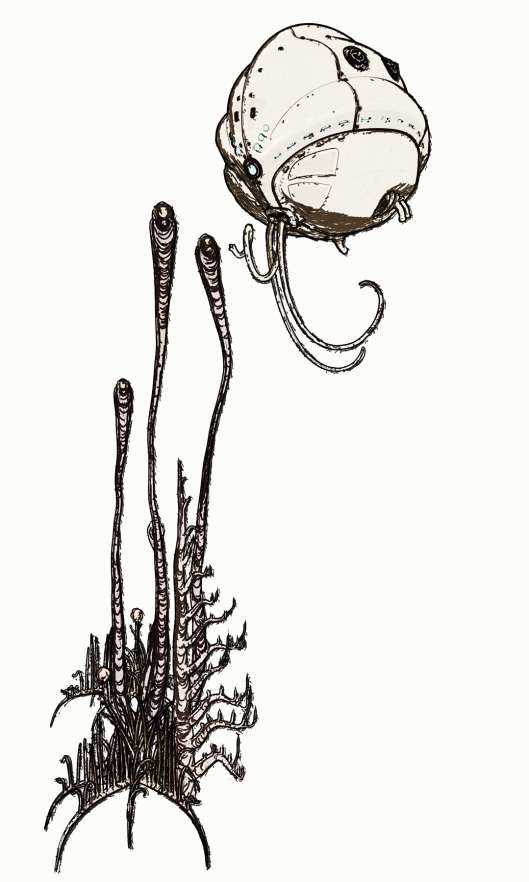 A few months back I spotted public domain scan on Archive.org, and realised that it could be re-purposed as a free book cover. I Photoshopped the text away, cleaned just a little, and made some small tweaks. I’ve just found it again, and this was the result… 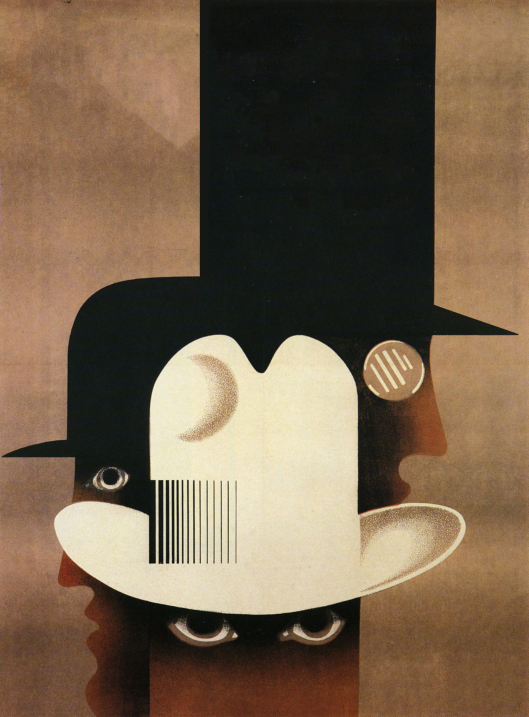 Specifically, it made me imagine a book featuring a mystery-adventure with H.P. Lovecraft (left), Robert E. Howard (centre) and Frank Belknap Long (right) as the protagonists. Feel free to use this bit of inadvertent Lovecraftian art (1926 from Barcelona, Spain, originally) for the cover of such a lengthy tale, with the addition of suitable typography of the era.

I initially imagined such a tale set in New York City, but looking at it now… the desert-night colouration and faint hint of a pyramid-like mound in the background could suggest Lovecraft and Long making a long-distance visit to R.E. Howard in Texas, en route to a cruise across the Gulf of Mexico and a tour of the ruined temples of central America. Such an ambitious trip could be deemed to have been ‘financed by Long, who had come into a small family legacy’ etc.

S. T. Joshi’s Blog has updated. In terms of non-fiction interest he notes that a number of journal runs have been added to the Books for Sale from the W. H. Pugmire library…

Interestingly I also see newly-added there…

An Index to the Selected Letters, Second Edition, $100

$100! I’m glad now I got mine a year years ago for much less. That was in anticipation of eventually having a set of Selected Letters in paper.

Librivox has just released a new unabridged recording by John Van Stan of The House on the Borderland. Also on Archive.org as a mirror. 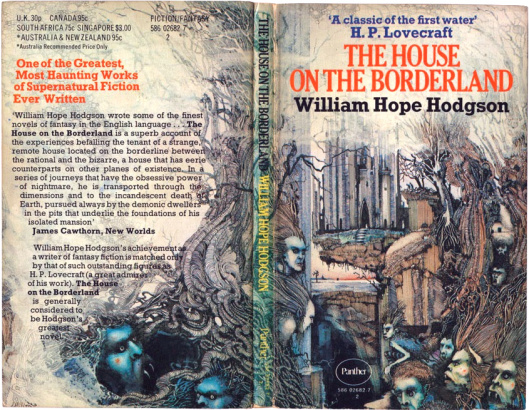 Cover of the UK Panther paperback. Blurb has plot-spoilers.

Bobby Derie reviews the new pulps-for-academics book Weird Tales of Modernity: The Ephemerality of the Ordinary in the Stories of Robert E. Howard, Clark Ashton Smith and H. P. Lovecraft.

Continuing the dockside theme of recent ‘Picture Postals’… the Fulton Street Fish Market, and a view of some of the towers of New York City as they appeared in 1930. 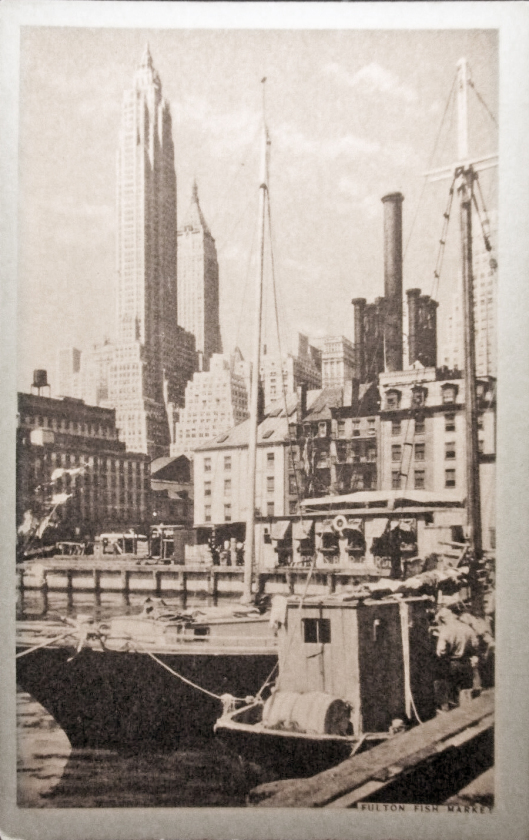 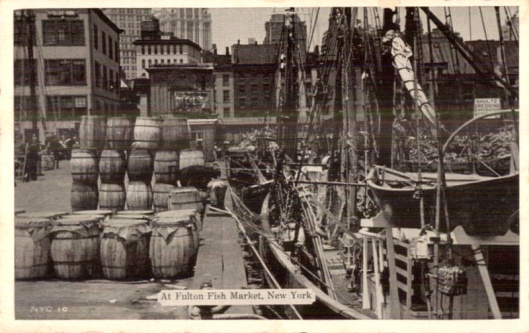 “Some years ago Long and I attempted to explore the Fulton Fish Market section of New York — which is full of quaint scenes and buildings. I don’t know where I left the lunch I had eaten an hour previously — for I was too dizzy to read the street signs! In the end I managed to stagger out of the stench without actually losing consciousness …” — Lovecraft in a letter of 1933, Selected Letters IV. 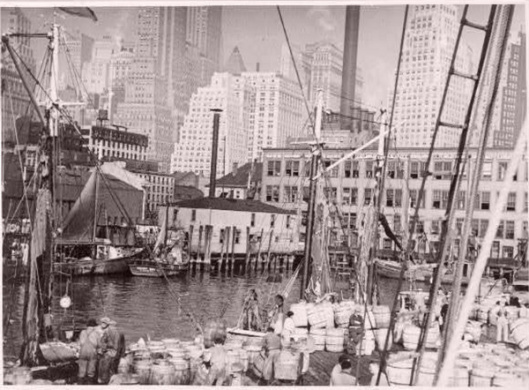 This brief mention suggests this daytime after-lunch visit perhaps followed a perusal of the large used magazines bookstore on that section of Fulton Street. Evidently Lovecraft had strayed too close to one of the main market-places, probably as it was being sluiced out at the end of the day’s trading, and his well-known reaction to the smell of fish took hold of him. 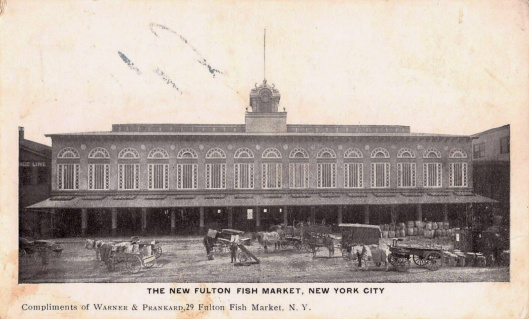 Yet, according to Vrest Orton’s memoir of Lovecraft in New York, the same area was also a fairly frequent night-walk haunt, as he and Lovecraft went in search of 18th century remains (see his memoir in Lovecraft Remembered). How to explain the apparently incongruity? My guess would be that the fish-smell was less so in the dead of night, when the boats were away and fishing, and the disinfected slabs of the fishmongers awaited the dawn and the landing of the catch? There is also the weather to consider. Lovecraft could have explored with Orton in New York in the winter, whereas an early 1930s visit with Long might have been in high summer. 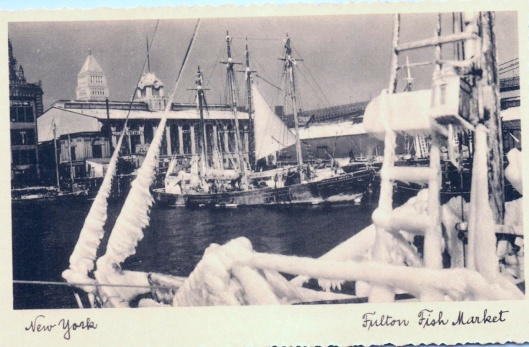 A tentative date, on the Bowker forward book-ordering database, for the paperback of Dawnward Spire, Lonely Hill: The Letters of H. P. Lovecraft and Clark Ashton Smith. These appeared in a 500 limited-edition hardcover in 2017. Volume 1 in paperback lists as… “Aug 2020”.

Now that the “back to uni” rush is over, a reminder of the The S. T. Joshi Endowed Research Fellowship in H. P. Lovecraft, 2020/21 edition.

The Fellowship provides “a monthly stipend of $2,500” to one lucky Lovecraftian “for up to two months of research” on H.P. Lovecraft and his circle, at the John Hay Library in Providence. 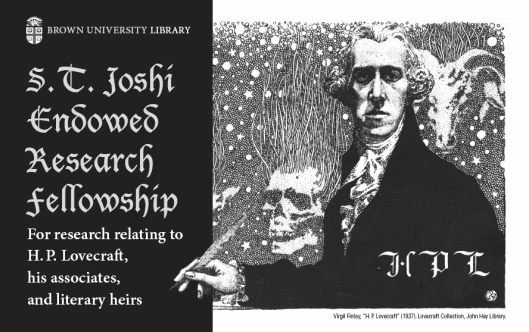