My copy of I Am Providence : the life and times of H. P. Lovecraft is on the way…

“This shipping notification is being sent to you by the U.S. Postal Service…”

I’d like to think the book is making its way across the Atlantic in the dark and slimy hold of an aged tramp steamer, accompanied by wild-eyed Norwegian sailors. But possibly not. I’m hoping to be opening the package in about two weeks.

One of the illustrations for The poems of Edgar Allan Poe (1900), by Heath Robinson… 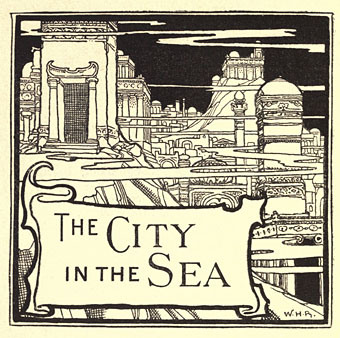 The “fiction magazines” links-list, over on the right-hand sidebar of this blog, has been updated with a clutch of new titles. Now more than 30 magazines listed.

Pictures of all the works in the new At the Mountains of Madness: a tribute to the writings of Lovecraft gallery show are now online.

Those interested in the possible influence of H.G. Wells on H.P. Lovecraft (Victorian pessimism about the ultimate fate of man in the light of advanced science and the unsustainability of religious belief, degeneration of the race, seamless blendings of horror and science fiction, the uncertainty of perception and world-understanding on the part of the scientific/rational narrator, tentacles, etc) might be interested that I’ve just published a Selected Bibliography of Scholarship on H.G. Wells’s The Time Machine (PDF link, 220Kb). I undertook it as part of creating a new 18,000 word novelette The Time Machine: a sequel for the Amazon Kindle Store.

Another of my fun Lovecraftian postcards, this time photo-montaged from Creative Commons elements by: Playingwithbrushes; Barnaby; MrsMinifig; Tambako the Jaguar; and geishaboy500. 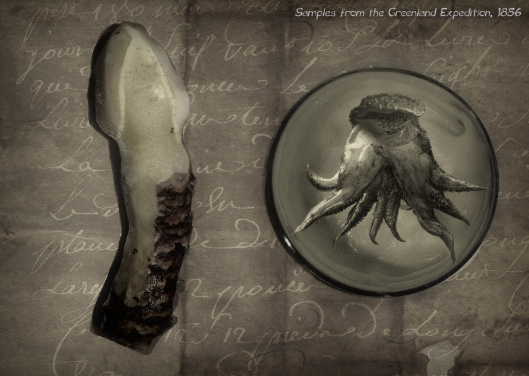 “Samples from the Greenland Expedition, 1856”

A bit heavy on the sun-faded look, I think. There’s also a darker version… 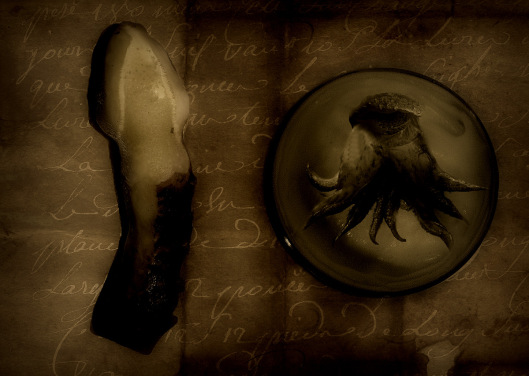 Lovecraft’s Commonplace Book of unwritten story ideas, written up as about 25 new stories…

“I put together a pool of writers from across the country, ranging from playwrights to improv actors to magazine editors to internet comedy writers, and I gave them all the same simple proposal: I would use a random number generator to assign them one of the Lovecraft ideas. They would then write, with the only limitation being that they fulfil all aspects of the idea they were given.” 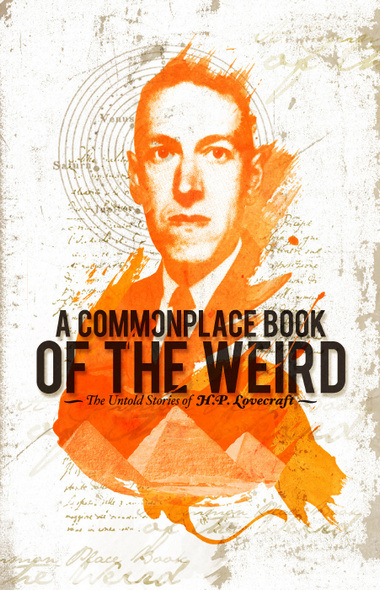 Lovecraft’s full original list is available here or as a PDF here. Just one example…

“Adventures of a disembodied spirit — thro’ dim, half-familiar cities and over strange moors — thro’ space and time — other planets and universes in the end.”

Fifth issue of Innsmouth Free Press is out now. The full PDF issue is here (1.8Mb), and has superb cover by M.S. Corley. 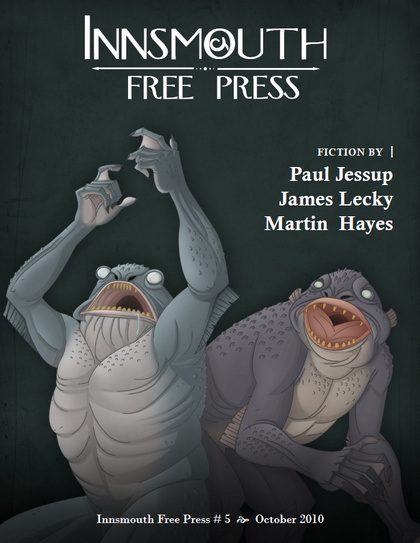 Frog-people of Innsmouth? An old illustration of degenerative inbreeding… 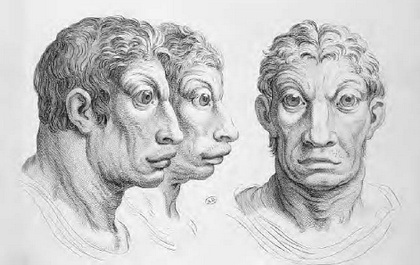 “There certainly is a strange kind of streak in the Innsmouth folks today – I don’t know how to explain it but it sort of makes you crawl. You’ll notice a little in Sargent if you take his bus. Some of ’em have queer narrow heads with flat noses and bulgy, starry eyes that never seem to shut, and their skin ain’t quite right. Rough and scabby, and the sides of the necks are all shriveled or creased up. Get bald, too, very young. The older fellows look the worst – fact is, I don’t believe I’ve ever seen a very old chap of that kind. Guess they must die of looking in the glass! Animals hate ’em – they used to have lots of horse trouble before the autos came in.” — Shadow over Innsmouth.

Examples of Lovecraftian tentacles in the circa-1895 work of H.G. Wells, writing when he was at the height of his powers…

“Until the extraordinary affair at Sidmouth, the peculiar species Haploteuthis ferox was known to science only generically, on the strength of a half-digested tentacle obtained near the Azores, and a decaying body pecked by birds and nibbled by fish, found early in 1896 by Mr. Jennings, near Land’s End. In no department of zoological science, indeed are we quite so much in the dark as with regard to the deep-sea cephalopods.”

[…] “The rounded bodies fell apart as he came into sight over the ridge, and displayed the pinkish object to be the partially devoured body of a human being, but whether of a man or woman he was unable to say. And the rounded bodies were new and ghastly-looking creatures, in shape somewhat resembling an octopus, with huge and very long and flexible tentacles, coiled copiously on the ground. The skin had a glistening texture, unpleasant to see, like shiny leather. The downward bend of the tentacle-surrounded mouth, the curious excrescence at the bend, the tentacles, and the large intelligent eyes, gave the creatures a grotesque suggestion of a face. They were the size of a fair-sized swine about the body, and the tentacles seemed to him to be many feet in length. There were, he thinks, seven or eight at least of the creatures. Twenty yards beyond them, amid the surf of the now returning tide, two others were emerging from the sea.”

“Their heads were round, and curiously human, and it was the eyes of one of them that had so startled him on his second observation. They had broad, silvery wings, not feathered, but glistening almost as brilliantly as new-killed fish and with the same subtle play of colour, and these wings were not built on the plan of a bird-wing or bat, […] The body was small, but fitted with two bunches of prehensile organs, like long tentacles, immediately under the mouth. […] They would alight upon their tentacles, fold their wings to a smallness almost rod-like, and hop into the interior.” [my emphasis]

“A horror of this great darkness came on me. The cold, that smote to my marrow, and the pain I felt in breathing, overcame me. I shivered, and a deadly nausea seized me. Then like a red-hot bow in the sky appeared the edge of the sun. I got off the machine to recover myself. I felt giddy and incapable of facing the return journey. As I stood sick and confused I saw again the moving thing upon the shoal–there was no mistake now that it was a moving thing — against the red water of the sea. It was a round thing, the size of a football perhaps, or, it may be, bigger, and tentacles trailed down from it; it seemed black against the weltering blood-red water, and it was hopping fitfully about.”

“Among the inner caves of the place waving trees of crinoid stretched their tentacles, and tall, slender, glassy sponges shot like shining minarets and lilies of filmy light out of the general glow of the city.”

Possibly more could be found. I was only searching one volume of Wells’s stories.

The latest phone charger accessory for the twitterati…

Gallery Nucleus will be putting its new Lovecraft exhibition, At the Mountains of Madness: A Tribute to the Writings of Lovecraft, online on 16th October 2010 (12 midnight, USA time) — for those of us who can’t afford to jet out to California.

Some of the work is still being made. Artist Justin Gerard talks us through his production process…

(Above: not the final image).