Four Horror Stories Of Cats, radically reworked and rewritten in the style and mythos of H.P. Lovecraft.

* “Beware the Cat”. Being the first ever English novel (1584). A gothic horror story of talking cats, freely adapted and modernised in a new Lovecraftian translation.

* “How the Grimmalkin Came”. A new sequel to both “Beware the Cat” and Lovecraft’s “Through the Gates of the Silver Key”.

* “The Sending”. A new prequel to Lovecraft’s “The Horror at Red Hook”.

* “The Case of the Savage Cat”. A new prequel to Lovecraft’s “The Horror at Red Hook”. 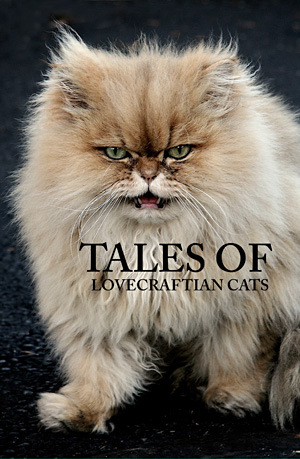 The Kadath Travel Guide. In French only, but profusely illustrated. 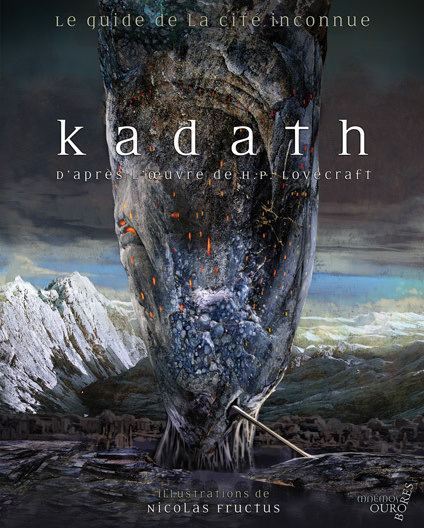 “With this new book published by Mnemos, you will begin the most fantastic dream quest for the first time since HP Lovecraft, you will survey your own risk the unknown streets of the city of Kadath. Four authors and illustrator have explored Kadath for you. On the trail of Randolph Carter, between beauty and terror, demons and wonders, you explore the famous city of the Lands of Dream, the capital of forgotten gods and cursed ones.”

The Fell Types as open-source Truetype fonts by Ignio Marini. So named because they were imported by John Fell of the Oxford University Press, from Holland circa 1670–1672, to bypass government interference in printing. As Propnomicon says, they’re excellent for “faux antique” documents. 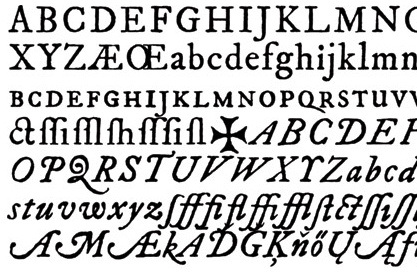 In the same vein is the display caps font “LP Aspen Cam”, but where you’d obtain it now I’m not sure. It seems to have completely vanished from the web.

My recent Lovecraftian ‘re-mix’ novelette Crusoe: the macabre further adventures of Robinson Crusoe is now available as an ebook on Amazon, for the Amazon Kindle ereader. It’s on the U.S. store only at the moment ($4.99), and I hope the UK store will list it soon. The whole book was re-formatted from scratch for the Kindle, and includes optimised illustrations in the text. It’s been a learning exercise in hand-crafting the HTML required for the Kindle, and crunching the illustrations down, which is a bit of a chore but is hopefully worth it. I hope to get my other Lovecraft books into native Kindle form over the next few weeks. 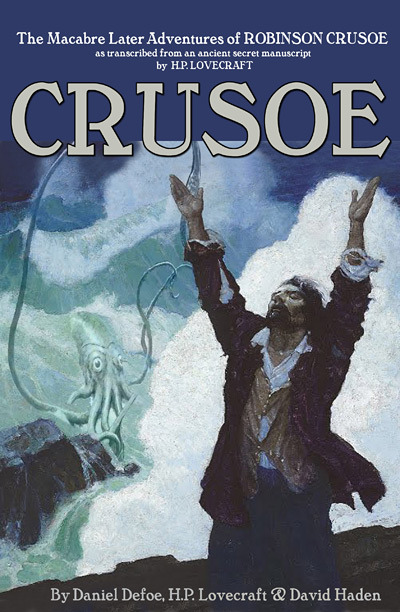 The Robert E. Howard Reader has been published. The book of scholarly essays contains one of direct interest to Lovecraft fans, “Weird Tales and the Great Depression” by Scott Connors.

MythosCon (Jan 2011, Arizona) has detailed program/schedule information. I can’t afford to go from the UK. But I’m hoping that the convention will be “podcast-friendly”, and will post the best of the panel discussions and talks online as MP3s.

And while looking for illustrative images, I found the covers for Alan Moore’s comic series Yuggoth Cultures and Other Growths… 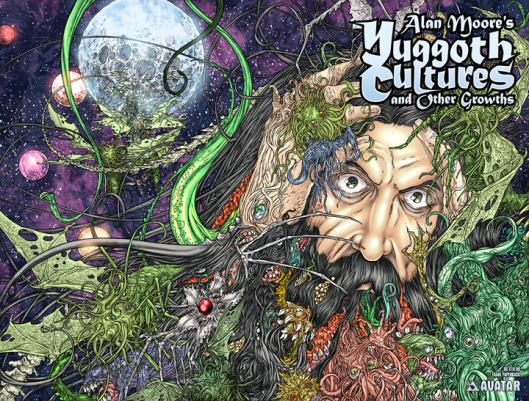 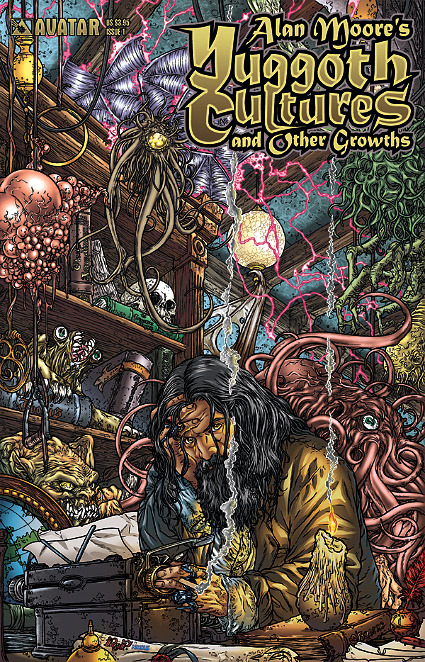 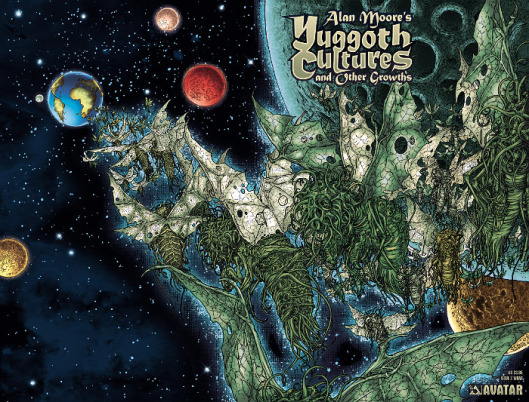 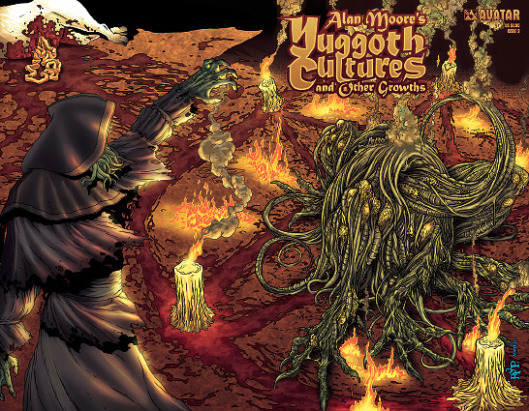 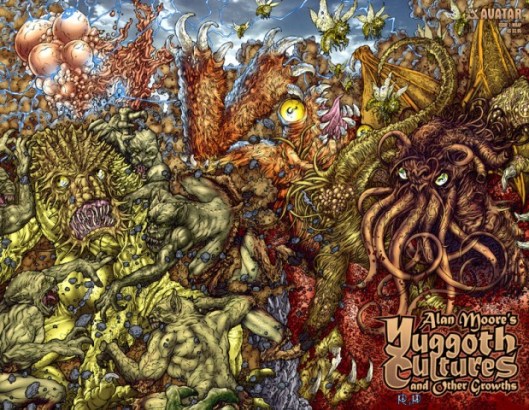 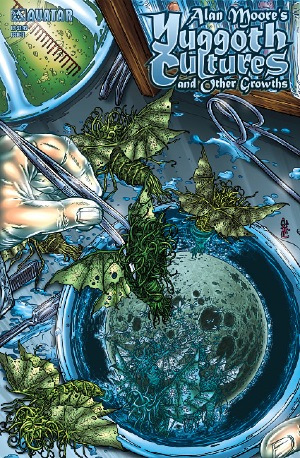 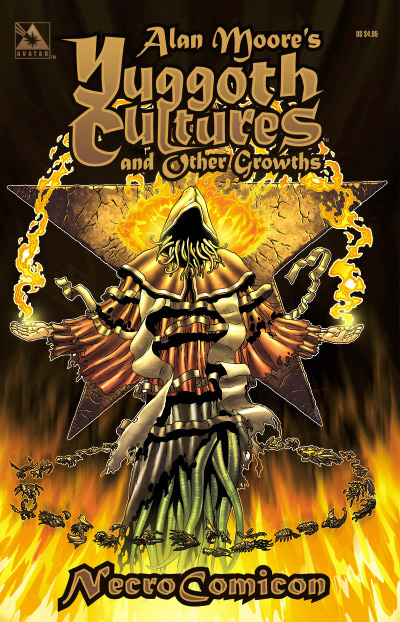 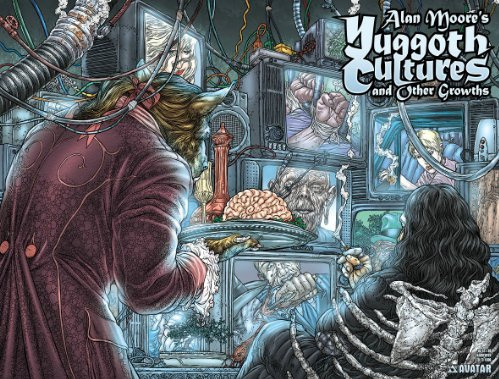 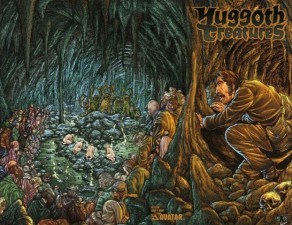 New at The Paris Review, a long interview with Michel Houellebecq. It hardly touches on Lovecraft (his H.P. Lovecraft: Against the World, Against Life was published in 2008), but does contain some insights into why he likes/writes science fiction.

Kaare Andrews (noted comics artist on Spider-Man and The X-Men and The Incredible Hulk) has a new Lovecraftian horror film out soon, going straight to DVD. 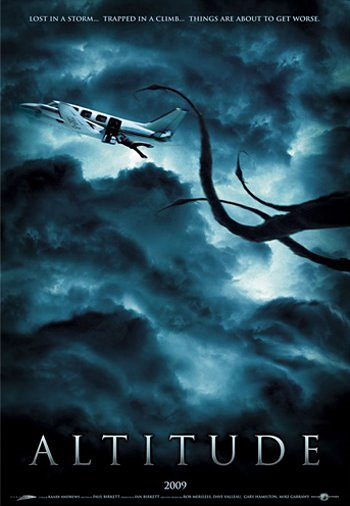 The premise of Altitude is quite interesting. It’s a green-screened indie film from Canada, set in a light plane — a constrained setting which one can only hope the director’s undoubted visual flair for composition has made the best of. The trailer looks good, in that respect, and the CGI looks competent. So one can only hope the story (by Paul A. Birkett, of Escape Velocity, Mindstorm, and Crash Landing) is strong, the plot has some intelligent twists, and the acting/dialogue isn’t dire. Birkett’s films get between one and two stars on IMDB, though, so I’m not hopeful.

The film is set in a small light plane, flown by a rookie teen pilot taking four cute friends for a spin. They go up and of course they hit a storm. They start to run out fuel. Then they panic. Then it gets really bad… 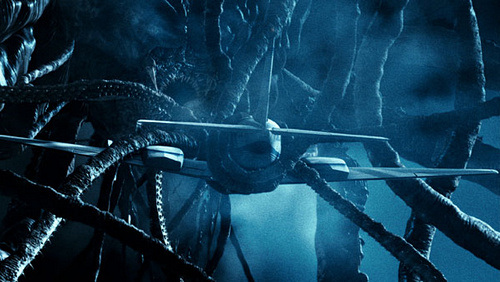 Altitude has been shown at the San Diego ComicCon without reviews, and it’s possibly a bad sign that it’s going straight to DVD (26th October 2010) — although maybe that’s just because they don’t want to waste money on the marketing needed to herd the mouth-breathing popcorn-heads into the cinemas. Straight-to-DVD doesn’t necessarily mean it’s dire — remember what Spielberg did with just a big truck and a TV-movie budget in Duel, for instance.

The official trailer (spoilers alert: it seems to lay out most of the film)…

Ben Woodard of Speculative Heresy opens a week of essays with a long philosophical article on Lovecraft’s attitude to science, the categorisation of the natural world.

“That Crawford Tillinghast should ever have studied science and philosophy was a mistake. These things should be left to the frigid and impersonal investigator, for they offer two equally tragic alternatives to the man of feeling and action; despair if he fail in his quest, and terrors unutterable and unimaginable if he succeed.” — Lovecraft, in “From Beyond” (1920).

I note that the Speculative Heresy team link to the Open Humanities Alliance, who have a template up for a new academic ejournal, titled simply Monster. No issues or even any blurb yet, but I’d welcome an open access journal that sees contemporary philosophers tackling monsters and the monstrous in the human imagination.

“After man there would be the mighty beetle civilisation, the bodies of whose members the cream of the Great Race would seize when the monstrous doom overtook the elder world.” — H.P. Lovecraft, “Shadow out of Time” (written Nov 1934 – Feb 1935).

… might have been his picking up on a current of thought popular at the time. But there is a much earlier precedent in Lovecraft’s works…

“You and I have drifted to the worlds that reel about the red Arcturus, and dwelt in the bodies of the insect-philosophers that crawl proudly over the fourth moon of Jupiter. How little does the earth self know life and its extent! How little, indeed, ought it to know for its own tranquility!” — H.P. Lovecraft, “Beyond the Wall of Sleep” (published October 1919).

Possibly Lovecraft got the ‘successors to humanity’ idea from H.G. Wells. There is an excised section of The Time Machine which imagines a far future Earth in which the degenerated last men are preyed upon by gigantic insects — although Lovecraft didn’t read that book until his New York soujourn, and since he read the book version he wouldn’t have seen that extracted section with the insects.

Possibly the idea of having the beetle race be “the successors of humanity” was a later addition to the 1919 idea in Lovecraft’s mind. One wonders if seeing people encased in the black carapaces of the early cars didn’t spark his imagination on that point?

Here is Lovecraft on the topic in a letter, in the mid 1920s…

“if the sun gives heat long enough, there will certainly come a time when the mammal will have to go down to subordination as the reptilia went before him. We are not nearly so well equipped for combating a varied environment as are the articulata; and some climatic revulsion will almost certainly wipe us out some day as the dinosaurs were wiped out—leaving the field free for the rise and dominance of some hardy and persistent insect species—which will in time, no doubt, develop a high specialisation of certain functions of instinct and perception, thus creating a kind of civilisation, albeit one of wholly different perceptions, (when other species view a given object, their ocular image of it differs—sometimes widely—from ours) emphases, feelings, and goals.”

Fantasy Flight adds another Lovecraftian board/table-top game alongside its existing Arkham Horror title. The new game Mansions of Madness is described as…

“Horrific monsters and spectral presences lurk in manors, crypts, schools, monasteries, and derelict buildings near Arkham, Massachusetts. Some spin dark conspiracies while others wait for hapless victims to devour or drive insane. It’s up to a handful of brave investigators to explore these cursed places and uncover the truth about the living nightmares within. Designed by Corey Konieczka, Mansions of Madness is a macabre game of horror, insanity, and mystery for two to five players. Each game takes place within a pre-designed story that provides players with a unique map and several combinations of plot threads.”