I’m pleased to say that my new book is now shipping. It contains revised, expanded, and footnoted versions of my recent Tentaclii essays. Some of the new discoveries include a macabre Lovecraft revision poem not included in the new edition of The Ancient Track; a probable new photo of Lovecraft at age 9; a major new source for Suydam in “Red Hook”; a disproving of the claim that the Necronomicon was inspired by Hawthorne’s Notebooks; and a new previously unknown but obvious source for the name Cthulhu. 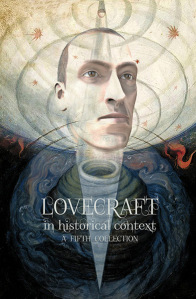 Suydam revealed: a major new source for “The Horror at Red Hook”.
Reds in New York: an aspect of Lovecraft’s New York circle in the 1930s.
A note on the interior layout of 169 Clinton Street, Brooklyn.

The location of “Juan Romero”: Area 52.
The Isles of Shoals as a possible inspiration for Devil Reef.
Locating the Sentinel Elm at Athol.
A note on H.P. Lovecraft and Bolton, Mass.
The Boston North End as H.P. Lovecraft saw it.
On the trail to Dark Swamp.

On Lovecraft’s glands.
Did Lovecraft read Moby Dick?
Hawthorne’s influence on the genesis of the Necronomicon.
Lovecraft’s pocket nuclear device.
A note on Lovecraft and Terence McKenna.

Book review: Lovecraft and Influence: his predecessors and successors.

Three additions and corrections for essays from previous volumes.