Following on from yesterday’s notes, the final post for Selected Letters II.

Page 259: Here Lovecraft is giving advice to young Talman, who by January 1929 had moved to Red Hook. Lovecraft recalls that when living at Clinton Street he had patronised… “the grocer on the corner of Atlantic” as he put it. Thus Clinton Street and Atlantic Aveneue, very near his room. He seems to imply there was only one such possible corner with a grocer on it.

Now it can’t be the “Atlantic Food Centre” seen on 1940s.nyc, because that corner was gone by 1934 and the “Food Center” only appeared there after Lovecraft’s time. Before that it was the Fougera apartments. They had stores beneath the apartments, but the larger of these appears to have been a liquor store. 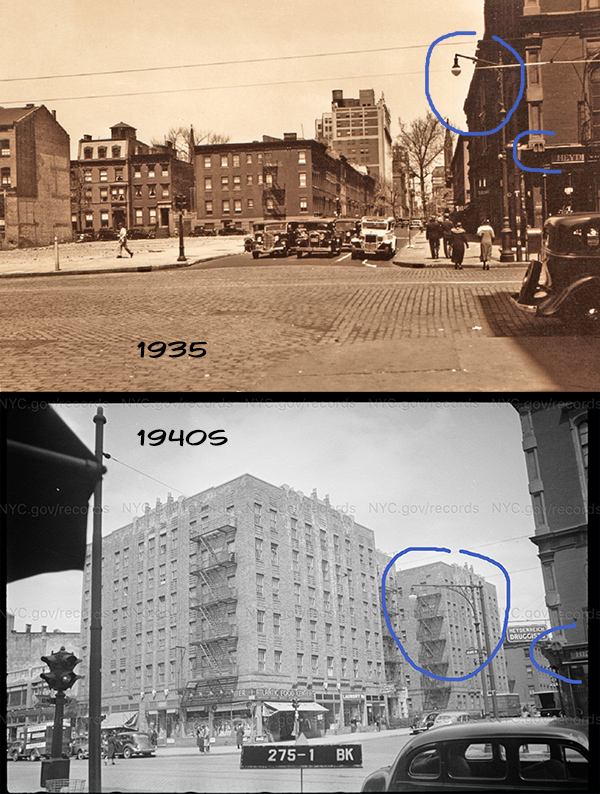 Although on 1940s.nyc the lower picture may be earlier, as the “Druggist” corner on the right of the picture was also demolished in 1942.

We know what the Fougera corner looked like in 1922, before demolition and the later “Atlantic Food Centre”, thanks to pictures in an article on The Fougera by New York historian Brownstoner. It does not look like a grocery store… 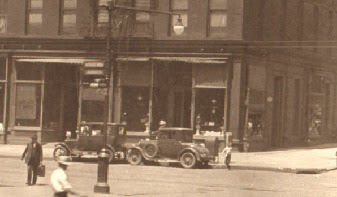 The picture of the demolished Fougera site does however give us a peep down the street to Lovecraft’s famous No. 169 Clinton address, albeit in 1935 and thus ten years after his time there… 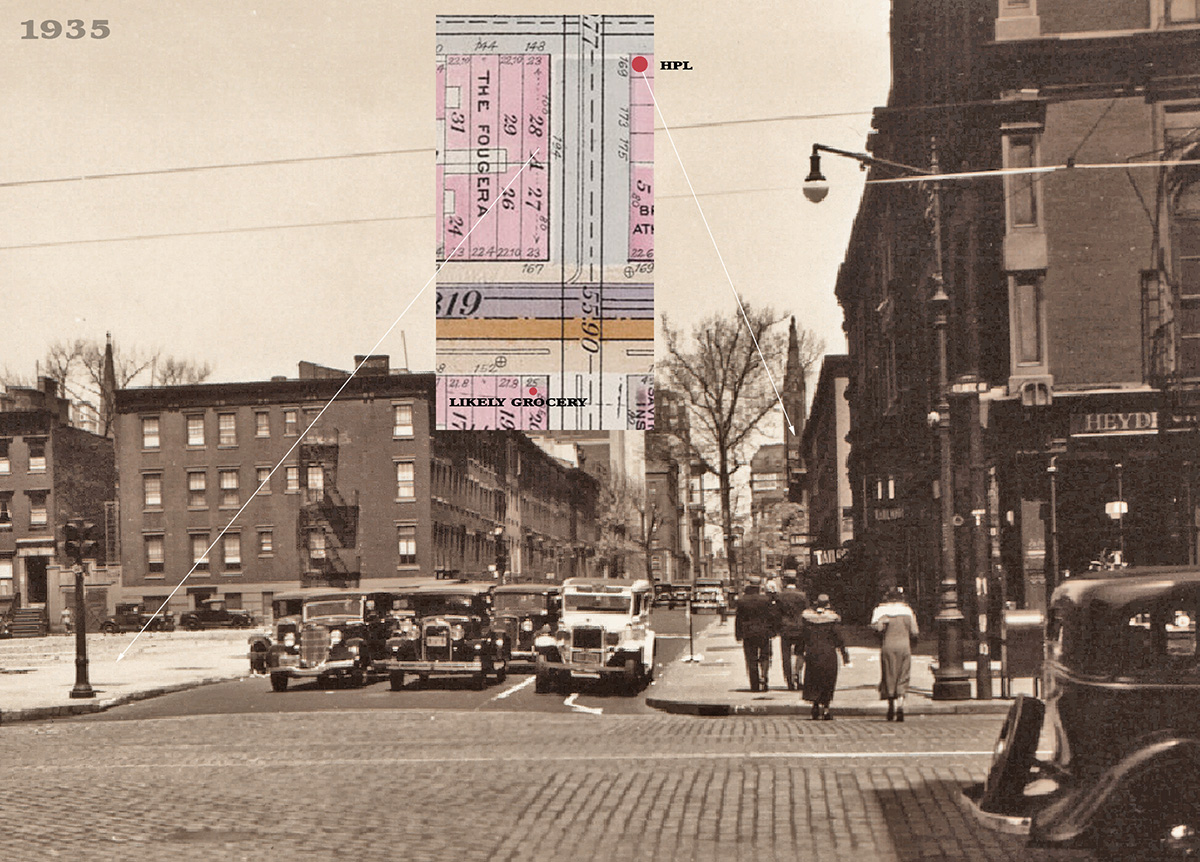 Lovecraft says elsewhere that he patronised the Syrian “tailor in the same block”, and here we can indeed see a large sign for “Tailor”. Also a glimpse of the corner store on the right (“Heyd…” something). We know from Lovecraft’s “Red Hook” story that there were relic Norwegians in the area, so my guess on the name would be Scandinavian. There are plenty of Heyde and Heyder surnames in Norway. A later picture shows a drugstore/chemists there, and this earlier incarnation does have the visual feel of a chemists’ shop. Not a grocery then.

But what of Lovecraft’s grocer? It’s not the Fougera corner and it’s not the drugstore corner. So it should be one of two possibilities that are behind the above-seen cameraman.

Ok, the 1940s.nyc site now lets me ‘turn the camera around’ and give readers a look at those two possible grocery stores. 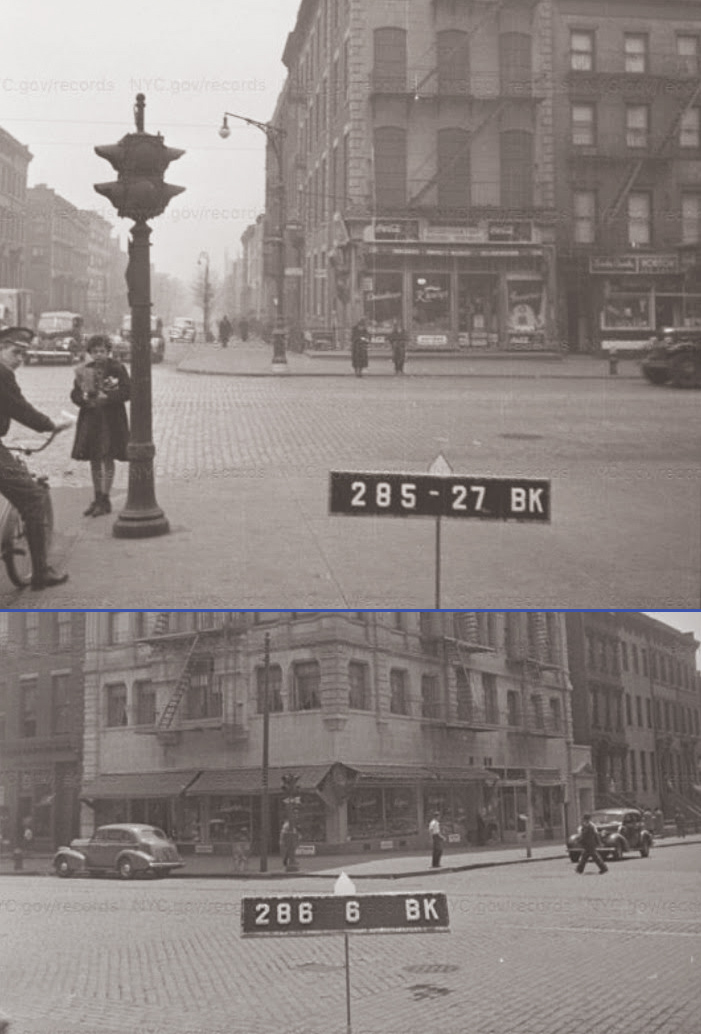 The bottom and slicker-looking one was built as a savings bank, which moved out in 1922. Google Street View has the building’s Clinton side as “191 Clinton” and the shorter Atlantic side of the same building is “160 Atlantic Avenue”. The same numbering applied in the 1920s. In 1922 American Art News announces…

Nicolas Macsoud [a painter of the Orient and miniaturist, 1884-1972] has returned to his studio, 191 Clinton Street, Brooklyn.

Although that may indicate the rooms above. The large apartments above the bank were home to several artists circa 1890s-1910s, and circa the 1900s-1910s the address pops up frequently on art show catalogues now on Archive.org. In 1921 it was still the address of the Brooklyn Society of Miniature Painters, though that may be because of the miniaturist Nicolas Macsoud. Nothing much is heard of art there after 1922. That may be due to the copyright cut-off. Or it could be that the artists departed with the bank in 1922, as the area went rapidly downhill.

But my feeling is that a lush marble-lined savings bank of 1922 would not suddenly become home to a cheap grocers the very next year. This reinforces my feeling that 160 Atlantic Avenue / 191 Clinton Street was not Lovecraft’s corner grocery, if it even was a grocery circa 1923-27. To me it feels, peering through the fuzz, like a fancy bread and cakes shop. Or perhaps a fruitier.

Update: I can now discount the store on this ‘bank’ corner of Atlantic Avenue – Clinton Street. A 1927 picture shows that a corner store was not yet there at that time.

That leaves one option. The top of the two pictures is the final possible corner, at 156 Atlantic Avenue. In this circa 1940 picture the address feels the cheaper of the two possible stores. It has what might be ‘delicatessen’ sign-writing on the windows. On the balance of probabilities, I’d say that Lovecraft’s Red Hook grocery store was at No. 156.

Today the area has obviously gentrified and 156 is the affluent hipster’s ‘Swallow Cafe’, though its facade still keeps the old name ‘Tripoli’ (the well-reviewed middle-eastern and “seafood specialities” restaurant that was there 1982-2010s). Pictures of the side of the building today show it goes quite far back, far enough to allow for a large grocery store in the 1920s, and this is confirmed by a similar early 1940s view of the place… 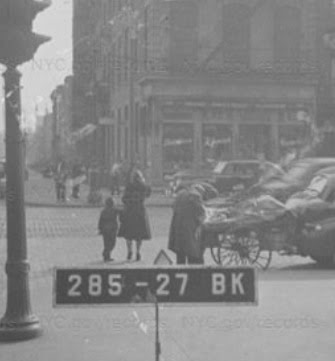 Mythos writers may then be interested to learn that No. 156 also goes down quite deep…

156 Atlantic Avenue: this particular building has three sub-basements, the lowest of which lines up with track level inside the [subway] tunnel. (The World’s Oldest Subway, 2015, page 22)

Thus Lovecraft’s Red Hook corner grocery had deep basements that went down and down until they reached the level of the city’s oldest subway. And was later home to a “seafood specialities” restaurant. Hmmm….

1 thought on “‘Picture Postals’ from Lovecraft: Looking down Clinton Street”