* Lovecraft mentions Chase’s Drug Store located at the central “bridge” area of Pawtuxet, stating that this store offered all the best available postcards of local scenes (page 58). The Providence Public Library has a picture of Chase’s frontage, with a chap appearing to carry away a packet of drugs that could equally be a set of postcards. I’ve here rectified and faintly colourised it (this kind of picture doesn’t take colour very well). The picture was made by Mr. Chase, so it is his store. 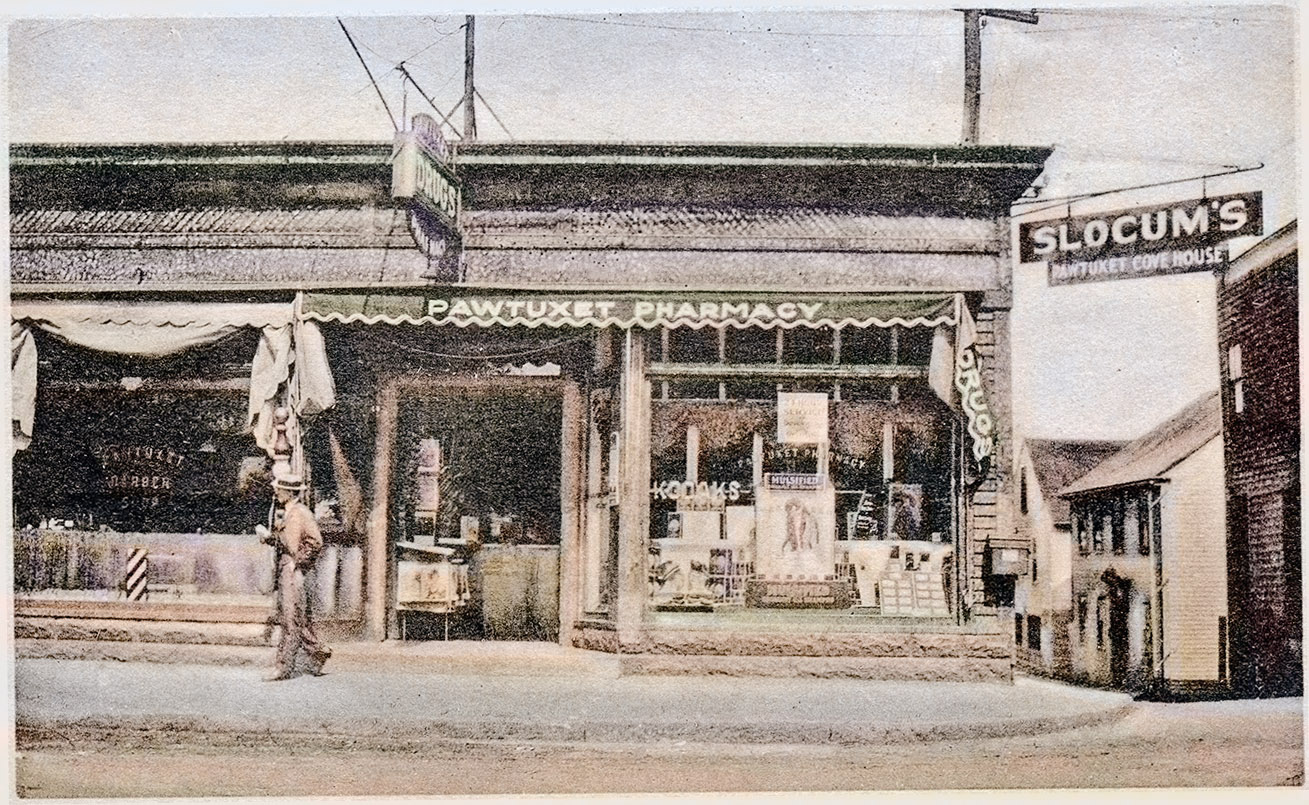 * Lovecraft states that he had his cuttings on Rhode Island and antiquarian matters well-sorted and assembled into scrapbooks by October 1926. These having been in mounded up in piles on his desk, when living in one room at Red Hook (page 77). His scrapbooks, antiquarian or otherwise, do not appear to have survived.

* In April 1926 he was back in Providence and exploring his own city. Though obviously inspired by Eddy’s recent introduction to the reality of an ‘unexplored Providence’, he appears to be alone in the following exploration. He was also presumably using the secrets he had learned about the layout of colonial Providence during the fateful visit to the Shepley Library. He thus begins to visit on foot parts of Providence he had not previously visited…

I discovered one of the most hellish slums ever imagined by mankind. it was a place whose existence I had not before realised — the end of Chalkstone Ave. near Randall Sq. and the railway — and its dark hilly courts approach the very ultimates of blasphemous horror.” (page 43)

It appears to be a dangerous area even today, just to warn any local Lovecraftians who might be thinking of photographing there. The 2022 news reports two shootings in Chalkstone Ave.

* In May 1926, Lovecraft was still exploring previously unexplored “seedy” by-ways, but this time perhaps less squalid ones. As he was in the company of his aunt…

Mrs. Gamwell and I took a walk thro’ a section of the town in which I had never set foot before — an antient and now seedy district east of the river and just south of the good residential area. Colonial houses abounded, and I was astonisht at some of the gorgeously antique effects obtainable here and there. […] It is call’d Dove Street, and has neither pavement nor sidewalk, but consists of irregular rows of simple Colonial cottages with rough stone doorsteps, and here and there a flagstone or two.” (page 54)

Dove Street is one of the parallel side streets that run alongside the main Hope Street at Fox Point, and head down toward the waterfront rail-yards at India Point. Dove Street still exists, though the map hints it may have been truncated in modern times. Today the Rhode Island Historical Society’s Mary Elizabeth Robinson Research Center is located about 160 yards to the north, which means that researchers might also fit a visit to nearby Dove Street in when visiting. The top part of Dove Street appears, from Street View, to be on its way to being gentrified.

Today “Doubloon Street” etc. One of which might have partly inspired “The Call of Cthulhu” setting…

one of the queer dark courts on the precipitous hillside [of Providence] which formed a short cut from the [dock used by the Newport boat on the] waterfront to the deceased’s home in Williams Street.

* In October 1926 he travelled, seemingly by motor-coach, from Providence and…

In March 1927, five months later, he wrote “The Colour Out of Space” with its soon-to-be reservoir setting.

* He cleaned his old telescope in October 1926…

I cleaned the brass of my telescope yesterday for the first time in twenty years. Gehenna, what a green mess! And I couldn’t get it very brilliant even in the end. That’s what neglect does!

So this tells us two things. That he still had his old telescope, but that he had not used it for a long time.

“Gehenna” is a word used in the King James Bible in the final parts of Isiah, and refers to a beautiful garden place, a garden-grove for refined dancing and singing that was near to Jerusalem. An insidious and intractable Moloch worship [i.e. ritual sacrifice of young children by burning alive] came to replace the dancing and song. Lovecraft thus alludes to the later form of the valley when, after being utterly despoiled by the Moloch worship and sacrifice, the later and more respectable kings of the city sought to blot out the memory of the despoliation with further despoliation of their own — they buried Gehenna under a giant tip used for the fire-ashes and waste and unwanted dead bodies of Jerusalem. Thus “Gehenna” became a byword for ashes and filth.

As in your case, the skies exert the utmost fascination upon me; nor is the weaving of wild dreams about their unplumbed deeps & suns & worlds in the least hampered by the precise astronomical data which my scientific side demands.

It is easy to see how the critic Paul Elmer More traces the horror-element in American literature to the remote New England countryside with its solitude-warped religious fanaticism.

* Eddy Jr. pops up again in July 1927 (page 156) when he is “hunted up” to join a gathering of visitors at Barnes Street of Morton, the Longs and others. The implication of the wording is that Lovecraft has not seen Eddy Jr. for a while, had not invited him to the gathering, and was not quite sure how to get in touch with him when someone (likely Morton) suggested Eddy Jr. should join them at Barnes Street.

* His birthplace and childhood home at 454 had an “ebony and gold” decorative scheme for the “front hall”, and then a rich “old gold and rose” for the “front parlour”, in which he used to read The Arabian Nights.

* A letter offers us some implied details of Long’s proposed “novelette”, which would have made characters out of Lovecraft and others in the New York City ‘gang’. He chides Long (page 172)…

As for your new novelette — look here, young man, you’d better be mighty careful how you treat your aged and dignified Grandpa as here! You mustn’t make me do anything cheerful or wholesome, and remember that only the direst of damnations can befit so inveterate a daemon of the cosmick abysses. And, young man, don’t forget that I am prodigiously lean. I am lean — LEAN, I tell you! Lean! And if you’re afraid that my leanness will make the horror get you instead, why just reduce [diet] like your Grandpa and escape as well! And be sure to depict me in my new Puritan frock coat. I think I shall adopt an umbrella also.

Evidently the proposed novel had by September 1927 become a “novelette” and was in the planning stage. Lovecraft by then expected it to be in the weird monster-horror vein and likely to feature mysterious demise or else “damnation” for the gang. Presumably it was to be set in the mid 1920s in New York City. That’s about all that can be gleaned here. His use of “LEAN” refers to Long’s humorously ribbing of Lovecraft about the early part of his New York sojourn, during which the master had grown distinctly plump under the influence of Sonia’s cooking and also her largesse in paying cake-shop and restaurant-bills.

The latter was not a new book, and had first appeared in 1889. Lang was the famous late Victorian scholar and folklorist, compiler of numerous useful popular anthologies of fairy and Northern epic stories, and translator of ancient classical texts. Haggard was the florid and fantastical adventure writer, famous for She. Their novel apparently… “continues the story of Odysseus, who returns to Ithaca to find his home destroyed”. He then leaves for a new quest, seeking his former love Helen of Troy. Lovecraft likely did read the still-rather-readable novel, since it spurred entry #141 in his Commonplace Book. Incidentally, the novel’s Wikipedia page has obviously had a severe and politically rebarbative mauling by leftists.

New Lands was a 1923 book by the modern confabulator Charles Fort, in which he focused on apparent “astronomical anomalies” that fall or float down from the sky. Fort used the book to loosely… “pull together examples of falls of stones, gelatinous substances, anomalous earthquakes, fireballs … bright stars, luminescent gas, mirages, ball lightning”, in pursuit of his barmy notion of ‘sky islands’ — actual land floating all unseen in our upper atmosphere. This theme of sky-falls has obvious relevance to Lovecraft’s “The Colour Out of Space”, written March 1927. Since I assume that Fort’s book was “skimmed” before and not after the writing of the famous story. I’ve not seen any other suggestions that New Lands inspired “Colour”, or rebuttals of the notion. Thus this may be my new discovery — if the dates align.

“Atlantideer” is a mis-transcription for Atlantida. This 1919 novel appeared in English in 1920 and was serialised in Adventure. It appears to be a romantic Sahara desert ‘lost race’ adventure with strong similarity to Haggard’s famous She. Indeed so strong that there was a legal case over it.

Goat Song appears to be a romantic coming-of-age tragedy-adventure involving a Spartan boy-warrior and his beloved.

It’s interesting that The World’s Desire, Atlantida and Goat Song could all be construed as having strong female themes which would have allowed Lovecraft to ‘think through’ his relations with the departed Sonia.

* With the visiting Talman’s help he discovered apparent Welsh elements in his family ancestry. Although striking an amused pose, he appears rather peeved and not a little un-nerved by this (page 180). Several slightly later letters see him diving headlong into Ancient Roman history and imagining (and indeed dreaming) himself as a Roman. I intuited that this may have been in reaction to the Celtic discoveries, or as he phrased it “this shocking revelation of hybridism”. This discovery has obvious implications for the development of the later “Innsmouth” and its idea of tainted heredity. The Welsh discovery was not the only shock from his family tree. Later, as Ken Faig Jr. has recently discovered, Lovecraft found an American side of the family line who had been rather lowly fish dealers. Thus offering us another possible inspiration for “Innsmouth”.

Actually the Welsh link in his core line of descent, as I’ve pointed out, may not have been really Welsh by lineage and blood. It may have simply been by residence. Although admittedly his letters do report him discovering one seemingly true-blooded Welsh lady had married into the family. Sadly his Northumbrian / Welsh(?) family line never seem to have been followed by a modern genealogist, and indeed I’m not sure if the relevant data now exists.

* He notes with some pleasure the first appearance of his fiction in hardback, when “The Horror at Red Hook” was re-printed as the concluding story in “Not at Night”. This was actually titled You’ll Need a Night Light, the third of what had only just become the ‘Not at Night’ series. These books contained Weird Tales reprints, selected for the British market by the magazine’s London agent Charles Lovell and then passed to Selwyn & Blount’s anthologist Christine Campbell Thomson for final choice and arrangement. 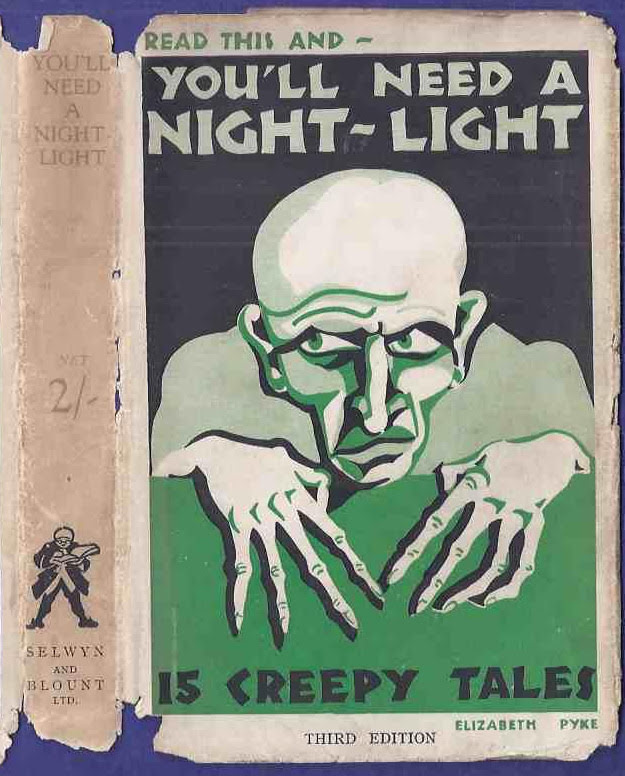 Despite this being a “third edition” cover the publisher apparently went bust shortly after publication, and the book’s UK rights were promptly purchased by Hutchinson. Which led to a legal tangle with Weird Tales, as a later Lovecraft letter recounts.

* And finally, a line written while joshing with Long (page 202) sounds like an entry in the Commonplace Book, but wasn’t…

4 thoughts on “Notes on Selected Letters II – part one”