From eBay, an interesting Galpin letter to book dealer Roy A. Squires from Italy, 24th May 1981. Sold by epagana for $50, sadly.

The seller’s blurb: “Galpin approached Squires seeking assistance in disposing of his letters and documents from HPL, Frank Belknap Long and others of the HPL Circle. As reflected in the letter, Galpin had every confidence in Squires discretion, expertise and professionalism. The “Stanley” mentioned in the letter is John Stanley – the former head of Special Collections at the John Hay Library that houses the Howard Phillips Lovecraft collection. The “Hime” mentioned is Southern California bookseller, Mark Hime; and “Long” is Frank Belknap Long who needs no introduction.

The scan is not quite the full letter, with the top and bottom appearing cropped, but it’s interesting nonetheless. Several items of biographical interest:

* He’s concerned about the ethics of selling Hart Crane letters, in terms of revealing Hart’s “private life” — presumably an allusion to homosexuality.

* He had been told that letters from Loveman were “worthless”, at least in terms of a cash sale, regardless of what content they revealed about HPL or Crane.

* He talks of “your own bulky file” in terms of making “silent omission of any documents that would risk compromising either you — or me”. Not sure what he means here. Possibly he’s talking of a bundle of letter photocopies supplied to him by Squires, and was alluding to his pre-war 1930s discussions on fascism with HPL and others? The bundle can’t have been Squires doing Derleth a favour and passing Galpin the transcripts from Selected Letters of H.P. Lovecraft vol. V (1934–1937), as that book had already been published in 1976.

* His ongoing friendship with Long, by letters. He remembers that he always liked Long the most, of the HPL circle.

* His aside on the impact of The Lord of the Rings on Italian crypto-fascists in the 1970s and early 1980s, among whom it apparently generated a “following”. This seems to imply that Galpin still moved in fascist literary circles in Italy in the 1980s, or at least had some insight into their tastes. 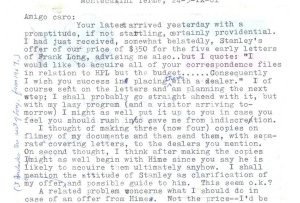 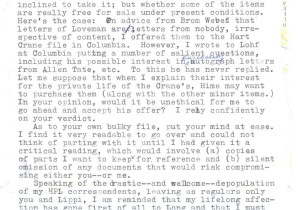